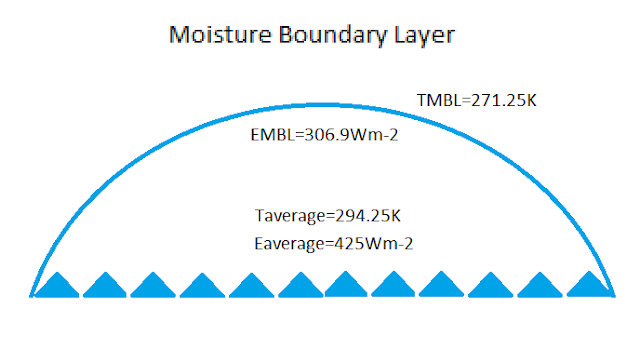 Most people just can't grasp the simplicity of this model.  The Earth is mainly ocean.  The ocean is water.  Water evaporates, freezes, flows, does water stuff.  Air with water in it, is different than air with no water in it.   So the first layer of the model is water, the ocean, and moist air.  Eaverage is the approximate radiant energy of the surface of the water at Taverage, the average temperature of the water.  The EMBL is the approximate radiant energy of a layer of air at TMBL, the temperature of that layer.  It is an imaginary layer.  If you look out your window you likely won't see it.  This imaginary layer is called a reference.  Why did I chose this as a reference?  Because by the time the moist air has cooled to that temperature is has likely started condensing into water droplets and maybe even ice.  There is also something else neat about that reference layer.  The total per gram of air at that temperature and 50% relative humidity is about 4.2 Joules per gram.  Oddly, the total energy of the water at the surface is about 4.2 Joules per gram.  Kinda funny huh?

Now here is a big word, THERMODYNAMICS.  The moist air in that Quonset hut looking shape has different THERMODYNAMIC properties than the dry air way outside the Quonset hut. 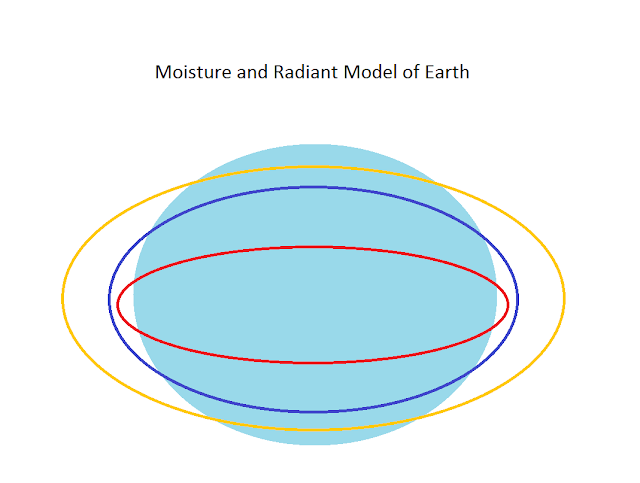 188Wm-2 would be equal to a temperature of 240K degrees.  That is a cold temperature.  So cold that there is very little moisture in air that cold.  That dry air would have different THERMODYNAMIC PROPERTIES than moist air.  Notice that my badly drawn yellow oval doesn't cover the entire badly drawn Earth with no land.  Those areas outside the yellow lines would have different THERMODYNAMIC RULES to follow.

Why would I be so uncaring?  It is called SIMPLIFICATION or simples if you like.  I start with the basic simple stuff and find out what hard stuff I need to figure out.  Once the imaginary ocean is balanced, then I can look at the imaginary land.

This is another funny little drawing.  It represents my imaginary ocean.  Notice that the light blue has the same 425 Wm-2 as the funny Quonset hut.  There is also a red layer with 495 Wm-2.  That is the hot red oval on the funny imaginary world with no land drawing.  There is a dark blue layer with 334.5 Wm-2.  That is a neat layer.  In the deep oceans there is a layer of water at about 4 degrees centigrade.  It seems to like that temperature.  On the sides are gray blocks with Ice 316Wm-2 and 307 Wm-2 Salt Ice.  I didn't type in the Wm-2 for the Salt Ice, because I didn't draw the block big enough and I am lazy.  Now here is something funny.  The Wm-2 stands for Watts per meter squared.  It is not correct to use Wm-2 in the water like that.

So why did I use Wm-2?  Because it SIMPLIFIES things and is informative.  From the 425 to the 307 is the same as in the cute Quonset hut except I ROUNDED.  From the 495 to the 307 would be 188Wm-2.  Does that sound familiar?  It should it is the same as the RBL from before, kind of odd huh?  It is almost like the system is in balance.  That is kinda the point of a static model.

Now the ice blocks.  The 9Wm-2 difference between the ice and salt ice is a joker.  These represent the energy of the heat sinks for the ocean and the atmosphere.  The temperature and the energy of the heat of fusion are nice reference values for an energy model.   The rate of energy transfer inside the ocean would vary between these two points as long as ice exists.  Sea ice that forms over the deeper ocean would insulate that portion of the ocean stabilizing temperatures.  If the deep ocean temperature is stable, then these references would make a very simple to use proxy for overall heat gain or loss. 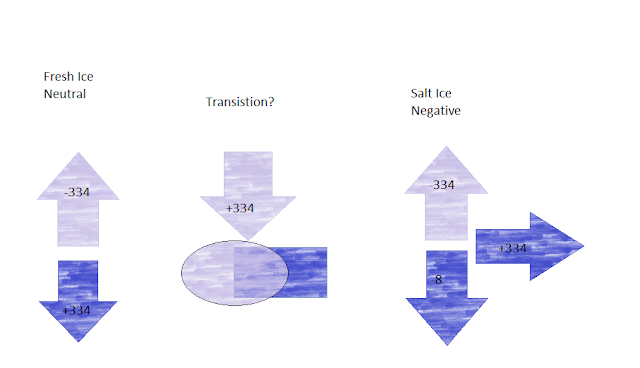 This drawing shows why I think there is a need for that proxy.  Fresh Ice or ice forming in fresh water gains or loses 334 Joules per gram in phase change.  The gain or loss is neutral.  Salt Ice or ice that forms from salt water loses or gains 334 Joules per gram, but there is an extra 8 Joules per gram needed to cool the water below zero C degrees.  Since salt ice forms in salt water, there is energy lost to the water as the more dense salt water descends from the point of freezing.  There is a transition for the melt of ice that has to be considered.  Ice that melts away from the salt water, whether on land or on the ice, doesn't return the heat to the ocean immediately.  The melt water with the energy gained from the heat of fusion must flow back to the oceans for that heat to be returned.  So like real estate, thermal mass balance is all about location, location, location.

The ice difference is fairly easy for most to understand.  The more interesting though is the vaporization balance.  The heat of vaporization is non-linear.  At 100C and sea level pressure it varies with the salinity of the water.  It also varies with the temperature of the water and the barometric pressure.  Where evaporation takes place and where the condensate falls are extremely important.  Remember, there are the poorly drawn ovals on the poorly drawn world with no land to consider.