In a Non-Equilibrium Thermodynamic system there is no true equilibrium or steady state, that's how it came by the name.  The approach to solving a non-equilibrium thermodynamic problem has to recognize the various possible causes of non-equilibria and impacts and the system changes.

One possible condition is a dissapative system that can reverse to a cumulative system.  That is a good description of the Earth liquid ocean and ice mass balance.  At some heat capacity, the oceans are dissapative.  Evaporation is transferred out of the liquid system into the ice system.  As long as the conditions for that dissipative state are met, the system "wanders" to ice.  Once a threshold is met, the ice "wanders" back into the system where the oceans begin to accumulate energy again.

The Plumber's Nightmare just shows the potential paths of mass and energy in the oceans system.  The thermal capacity of the system is limited by the freezing points of salt and fresh water.  Precipitation and ice formation can be in balance with evaporation and ice melt or not.  The system can wander from on state to the next. 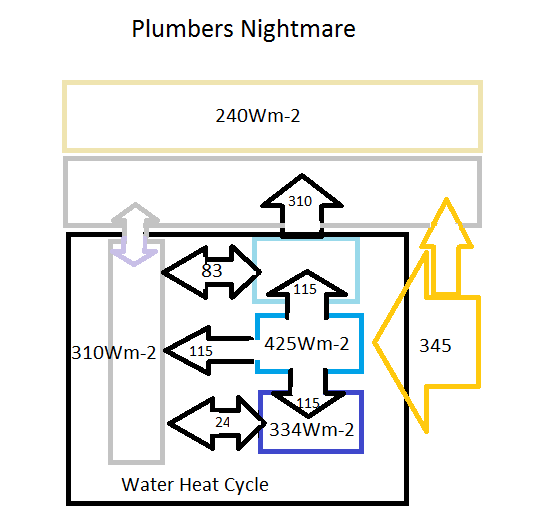 The drawing just shows "an" equilibrium condition that "may" be possible, but is actually a better illustration of a change point.  Since the oceans have a huge thermal mass, they can "buffer" changes in the input and output energy values for a considerable time period.

From Wikipedia,"Glansdorff and Prigogine (1971)[11] on page xv wrote "Dissipative structures have a quite different [from equilibrium structures] status: they are formed and maintained through the effect of exchange of energy and matter in non-equilibrium conditions."

With two more likely states, dissipative at higher energy and cumulative at lower energy (which corresponds to a dissipative ice state) the system is bi-stable.


Greenhouse Effect Theory would have to consider the impact of these two potential states.  Assuming that albedo change is a sufficient consideration would not properly explain the various impacts that the location of the thermal masses, water and ice, would have on radiant energy conversion.  For example, loss of glacial mass at a high tropical location would have significantly less surface impact than the loss of ice mass at a higher latitude and lower elevation.

To help consider the thermal mass impact and moist air boundary layer that encompasses sea level liquid water and all altitudes with temperatures below the freezing point of water can be considered as a quasi-radiantless system with dissipative/cumulative properties.  Ice mass as well as energy can move into and out of that moist sir envelope. A second radiant envelope can be considered with quasi-conditiveless properties.

Since thermal mass can be dissipated and re-accumulated, there would be thermal inertia (heat capacity)of not just a theoretical nature but a mechanical nature that needs to be considered.