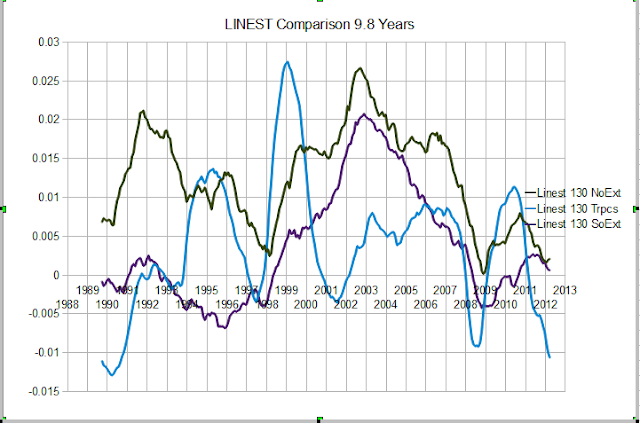 This is a new rendition of the LINEST (see description here and here) oceans using the UAH data.  There is a lot of noise in the ocean thermal energy.  Some of that noise is in phase and makes sense, some is out of phase and meaning has to be teased out.  Depending on the trend length, LINEST highlights different patterns.  This is for 130months or about 10.8 years, so you will notice the error in the chart title.  The period was selected to try and highlight the solar cycle.  The peaks are somewhat likely to be related to the solar variation, but not in every case.

The light blue tropics has a roughly 3.5 year pseudo cyclic oscillation. The main peak in 1999 for this chart shows that the Northern and Southern extents have a roughly 4 year lag and about 5 years later, 2008, the three sections of the oceans become more synchronized.   For this period, the most obvious non-synchronization appears to be 1994 to 1995 where the tropics shifted positive while both northern and southern continued negative.  From the peak of the 1995 non-synchronization it is about 4 years to the 1999 tropical peak and the synchronous shift of the northern and southern ocean expanses.

The 1999 peak is about twice the 1995 peak, which is similar to complementary wave response.  The inertia of the returning waves, the northern and southern extents, combined with the originating wave, the tropical oceans.  This appears to be a perfect example of thermal inertia in a fluid system.  With the periods not being perfectly timed, ~3.5 to ~4 years, the overall pseudo-clyclic period is hard to determine, but this appears to be about a half cycle or a full cycle.  With complimentary forcing, a weakening solar on a downward slope for example, this would be a half cycle.  With non-complimentary forcing, strengthening solar on a downward slope, it would appear to be a full cycle.

My description is no doubt lacking, but there is evidence of thermal inertia in the ocean heat capacity which just like waves in a pond radiate to edges, the poles and return to the source, the tropics.  This is interesting, but it would greatly complicate attempting to assign a response to a particular force without full consideration of the natural internal oscillation frequencies.
Posted by Unknown at 6:38 AM