Updated below just for Micheal:

Gilbert Plass is another scientist that predicted Global Warming due to increased Carbon Dioxide emissions. In the mid 1950s, Plass predicted that if emissions continued at the then current rate that global temperatures would rise to 1 degree C above the1900 temperature by 2000.  " Plass predicted that a doubling of CO2 would warm the planet by 3.6°C, that CO2 levels in 2000 would be 30% higher than in 1900 and that the planet would be about 1°C warmer in 2000 than in 1900."  The actual emissions were higher, 37% versus 30%. 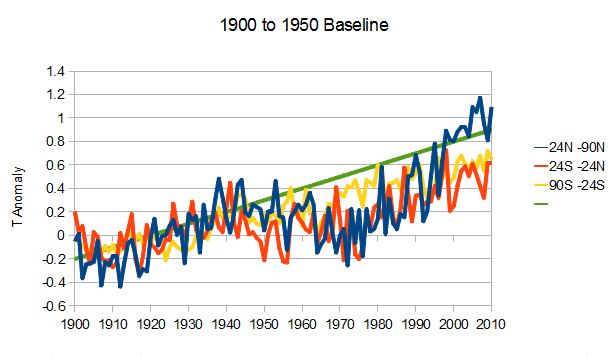 That is a plot of the GISS LOTI regional data with Plass' prediction in green.  If the globe where only the norther extra tropics, Plass would have been dead on the money.  The actual global average warming was close to 0.8C with the 37% increase in CO2.

In 1988, James Hansen also predicted that increasing CO2 emissions would cause global warming. 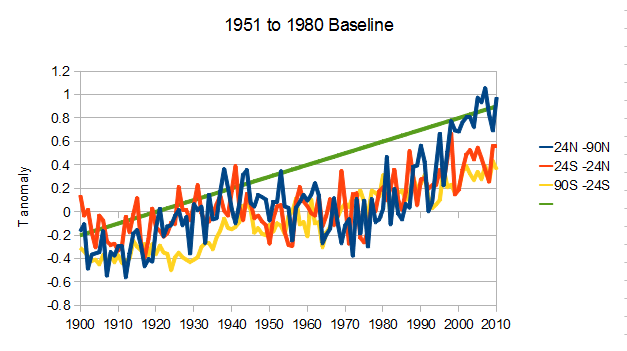 Here is the same plot except this time using Hansen's 1951 to 1980 baseline.  Up until 2000, Hansen's predictions like Plass', where right on the money, if the Globe were the Northern extra tropics.

Since around 2005, there is a growing group of people skeptical of the accuracy of Hansen's and Plass' predictions. 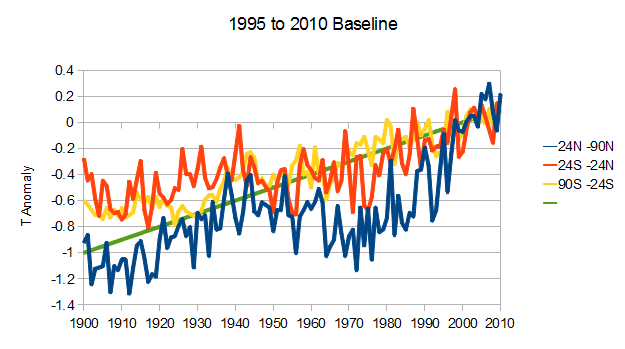 This is the same plot except with 1995 to 2010 used as a baseline.  The skeptics noticed that the degree of warming depends on the choice of base line.  The dip in the blue northern extra tropics temperature record is supposedly due to man made aerosols following 1940 and the rise from 1910 is supposedly due to lack of volcanic activity and increased solar energy from 1910 to 1940.  It looks like the orange tropics and the yellow southern extra tropics didn't get the memo.  There is reason to argue that the tropics and southern extents would not be impacted the same way as the northern extra tropics, both from the Hansen-Plass camps and the skeptic camps.

If you take the data a little further back in time, which position is better supported? 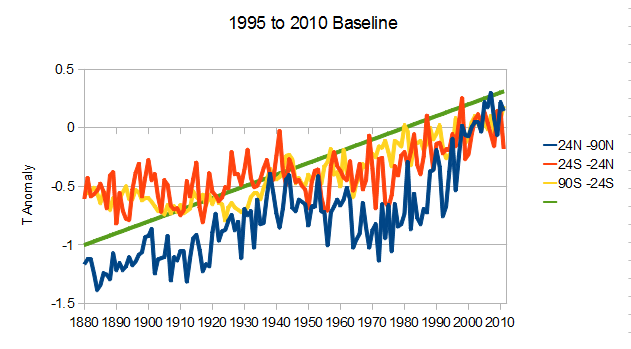 From this plot using the 1995 to 2010 base line and the full GISS LOTI data from 1880, the Northern extra tropics could have started the instrumental era as much a 0.70 degrees C colder than the rest of the world.  The Little Ice Age and Medieval Warm Periods were both considered regional events, so why would the northern extra tropics be considered "normal" versus the rest of the world if the events were "regional"?

Svante Arrhenius also predicted that CO2 would either warm or cool the world likely causing the ice ages.  In the 1890s he predicted a high rate of warming for a doubling of CO2 which he later revised to a lower 1.6C per doubling.  Plass predicted a slightly lower range in 1953 and then Hansen predicted a rate nearly the same as Arrenhius in 1988.  All three predictions are currently higher than the observations. 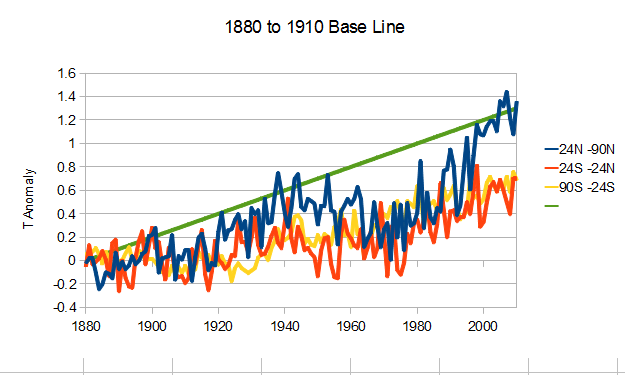 Svante Arrhenius would have used a base line like the one above.  From that perspective, were the Northern extra tropics the world, his prediction would have been right on the money.  All three scientists were from the higher northern latitudes.  All three had less than stellar southern hemisphere data.  All three appear to have over estimated the impact of a doubling of CO2.  Easy to do if you don't know what "normal" should be.

To add insult to injury, prior to the satellite era, the average temperature of 70% of the surface of the ocean was not known.  CO2 interacts with out going thermal energy.  The degree of that interaction would depend on the amount of energy.  With the launch of the AIRS satellite in 2002, the actual sea surface temperature was finally measured.  The ocean has a thin surface skin layer.  According to NASA Goddard ,"The actual thickness of the skin layer depends on the local energy flux of the molecular transports, which is usually less than 1 mm thick and can persist at wind speed up to 10 m/s.For stronger winds, the skin layer is destroyed by breaking waves."

That thin skin layer is the radiant surface of the oceans emitting the energy that interacts with CO2.  Based on the AQUA data, the average temperature of that skin surface layer is approximately 21 C degrees.  That is approximately 5 degrees warmer than the estimated average sea surface temperature record.  That warmer than estimated skin layer is a thermal barrier to energy flow into and out of the oceans.  One of the few locations on Earth where the average surface wind speed is strong enough to destroy the surface skin layer is the southern oceans where turbulent mixing provides for more constant heat flow.  That would be why the more stable yellow curve in all of the plots above is stable.

That would imply that Arrhenius, Plass and Hansen all lacked the crucial data required to properly estimate the impact of CO2 on the surface temperature of the global.  Hansen however, should know by now.  So should most of the "climate" scientists currently advocating radical change in energy use.

CO2 does interact with out going thermal or long wave radiation.  So there is bound to be some impact from emissions.  But the degree of warming that can be expected looks to be much lower than advertised.  There are other more rational options than risking energy poverty on unproven and overly expensive alternates. 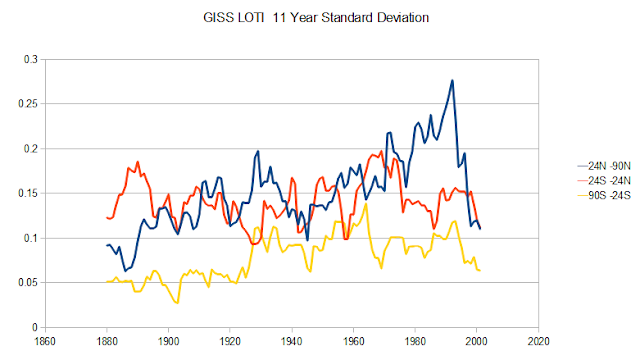 This is sequential 11 year standard deviations of the GISS LOTI data in the legend using open office STDEVP function.  With uniform warming there should be an increase in the variance of the data.  The sequential standard deviation plot just allows easy comparison of data sets.  Around 1940 all the data sets had a reduction in standard deviation and again about 1995.  In the 1940s the tropics lead the reduction and in 1995 the tropics followed the reduction.  There would appear to be two different situations causing the two changes.
Posted by Unknown at 7:11 PM