Blah Blah Duh, aka BBD, is a blog denizen that frequents Dr. Curry's blog Climate Etc.  Blah Blah Duh, is the individual that promoted me to a Fraud and Buffoon a while back.  Since the Christmas truce, BBD has been a bit less volatile, but still has this annoying habit of not thinking.

BBD, incorrectly assumes that in a system that has stored on the order of 10^26 Joules of energy, that a change is solar energy should be immediately seen in the surface temperature record.  The system is way too entertaining to do something so obvious.  Now there are parts of the system with less thermal mass that do respond quickly enough to "see" fluctuations on a shorter time scales.  The Stratosphere is one such "tale tell" of changes in energy flux. 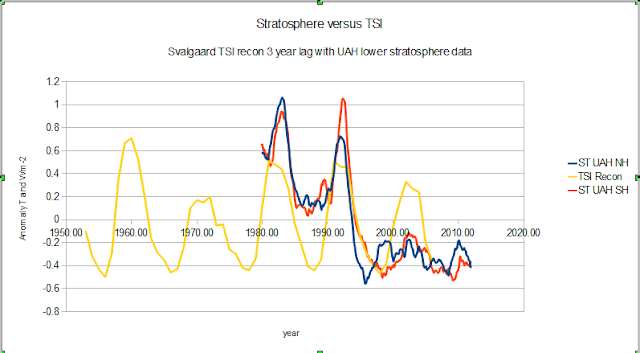 This is a chart of the lower stratosphere data from the University of Alabama, Huntsville and a Total Solar Irradiance(TSI) by Leif Svalgaard at Stanford University.  The is a pretty clear correlation with a lag of 3 years.  Since the Stratosphere temperature is closely linked to ozone, there is most likely some solar impact on ozone with lag of about 3 years.  I have no idea what all is required to explain the exact effect or the magnitude of the impact, but there is pretty clearly some correlation.

I would recommend that BBD, blow off his preconceived notions and join the fun of solving the puzzle which has taken an unexpected turn recently.
Posted by Unknown at 6:52 AM