With solar energy being able to penetrate the thermocline causing subsurface warming and above surface cooling causing sinking water with increase density, when heat transfer between the rising deeper water and sinking shallower water are near equal, a true isothermal layer is formed.  Since advective or horizontal energy flow has the near zero as well, the stable latent fusion temperature of water limits advection.  The layer is not only isothermal but effectively isostatic.

If the freezing point of water were exactly equal to the isothermal energy of the thermocline, then the thermocline would effectively be an ideal black body.  The lighter blue arrows indicate the latent heat of fusion force vectors opposing the isostatic thermocline.  Since there is a difference, the orange vectors would indicate the degree of imperfection of the thermocline with respect to a perfect black body emission of unity.  Assuming the values are correct, the emissivity of a 4C liquid water thermocline would be (334-18)/334= 0.946 unitless.  Since the layer is not perfectly isostatic or an ideal black body, the energy imbalance would lead to expansion of the layer as shown.  If the layer is truly stable, isostatic, then the less than perfect emissivity has to be contained in all directions. 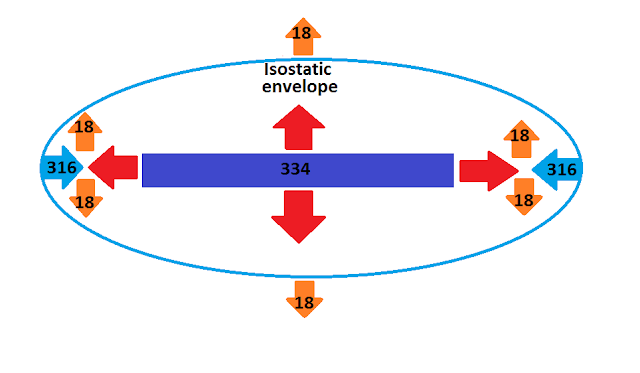 Since the static model is reduced to pure energy vectors, the energy required to maintain an isostatic condition can be of any form or combination.  A major issue with the isostatic model is that the controlling energy of the envelope is not fixed.  The salt in the oceans depresses the temperature of the heat of fusion.  The latent heat or enthalpy of fusion is fixed at 334 Joules per gram.  With water releasing energy during freezing and having to gain energy to thaw, over some period of time the requirement of static equilibrium would need to be met or there would not be liquid water.  Freezing occurs at the poles and the isostatic envelolpe has to be maintained in all directions.  The rate of ice formation and melt would be an indication of the magnitude of the balancing energy vectors in other directions.  Because the value of the isostatic envelope is at the freezing point of fresh water, energy can be dissipated or accumulated over time allowing non-equilibrium but stable conditions. 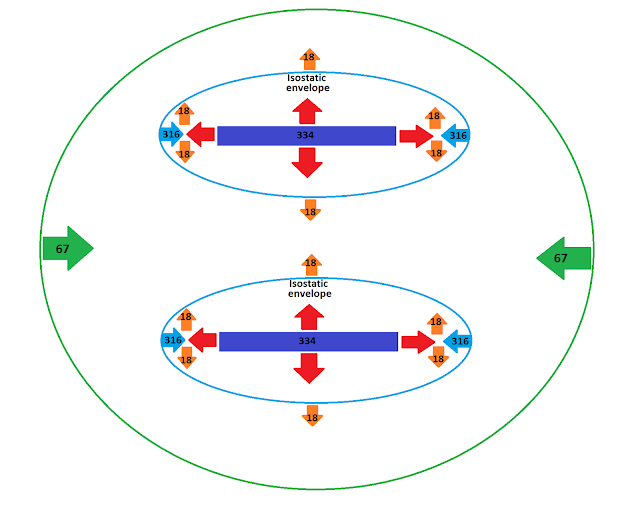 Based on the lowest temperature ever recorded on Earth, the first true isothermal shell that can enclose the entire planet is 184K degrees with an equivalent energy vector of 67 Wm-2.  The near perfect ocean black body shell does not uniformly cover the "surface" and due to equatorial solar energy input, you have to consider the "surface" a torus enclosed by an ideal radiant shell.  Since the ocean shell effectively covers only 70% of the physical surface, the "average" energy radiated over the entire surface would be 70% of 334 Wm-2 or 233.8 Wm-2.  Since the land portion of the surface has some heat capacity but poor emissive properties with respect to an ideal black body, the impact of the land surface area on long term atmopsheric forcing is not easily determined.

One clue is the 67 Wm-2 radiant shell.  If all the energy of that shell is provided by the "surface", the total energy of the shell would need to be twice 67 or 134 Wm-2 to be stable since it has to emit both outwardly and inwardly from an isothermal spherical surface. With 233.8 Wm-2 as the "effective" surface radiant energy and 134 Wm-2 the total energy of the enclosing shell, the "effective" magnitude of the atmospheric portion of the "greenhouse effect" would be to raise the surface energy to 367.8 Wm-2 or roughly 30 Wm-2 less that the best estimate of the "average" "surface" energy.

The atmospheric"window" energy or the estimated amount of energy that does not effectively interact with the atmosphere on its path to space, is approximately 40 Wm-2 or 10 Wm-2 more than what would be indicated by the static model.  That could be due to a number of issues, but since the atmosphere does absorb solar energy directly, an intermediate shell representing the turbulent and chaotic atmosphere may reduce that uncertainty.

According to Graeme Stephens et al, the approximate amount of solar energy absorbed by the atmosphere is 76 Wm-2.  Since that is supposedly the total solar energy absorbed, the imaginary atmospheric shell would emit approximate 38 Wm-2 inwardly and outwardly in addition to the energy provided by all types of energy transferred from the "surface" to that shell.  Given the uncertainty of the ocean "shell"and the 67 Wm-2 radiant "shell"  plus or minus 10 Wm-2 drift may be the norm or due to a combination of the model limitations and data accuracy.

The imaginary atmospheric shell is not likely to enclose the entire true surface of the planet.  The data provided assumes that it is a "true" average for the entire true surface, but it is more likely to apply to the area covered by the 316 Wm-2 isostatic enclosure.  As the area and volume of the 316 Wm-2 enclosure expands and contracts the impact would vary requiring a more accurate approximation of the "average" area of the enclosure.  Luckily, the liquid water portion of the two greenhouse effects is more stable. 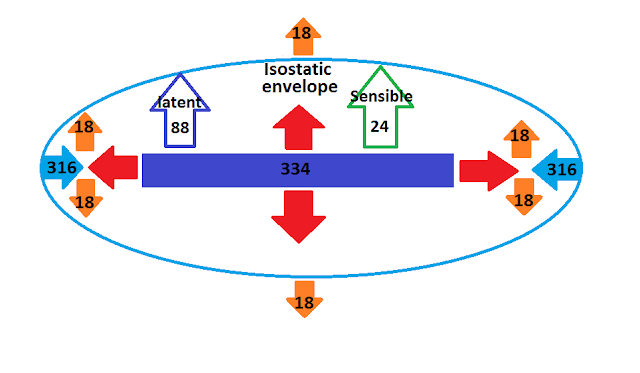 Using Stephens et al. estimates for latent and sensible cooling 112 Wm-2 is transferred from the surface to the atmosphere.  The 18 Wm-2 initial imbalance is likely included in that total and if you assume that the impact of radiant transfer is not significant inside this moist air envelope at near surface density and pressure, most of that 112 Wm-2 would be produced by ~ 70% of the true surface, the area in side the moist air or 316 Wm-2 envelope, in keeping with the original use of the model.

Since the latent portion would be associated with evaporation and condensation of water, roughly 70% of the Earth's surface would produce the 88 Wm-2 "global" latent cooling so the 88 indicated in the sketch above would more accurately be 125 Wm-2 for this model configuration.  The 24 Wm-2 sensible portion would not have to be confined to the 316 Wm-2 envelope, but the majority likely does originate in this envelope.

The fun I mentioned is that if properly accounted for, the static model will produce fairly accurate values for "equilibrium" conditions of a general "average" state.  The problem is that all reference layers will have to produce that same results.  With the model roughly adjusted for the estimated 334 Wm-2 "average" energy of the oceans, the uncertainty is at least 10 Wm-2 which is not bad considering that the Stephens et al. Energy Budget has a margin of error of +/- 17 Wm-2 at the surface.  A great deal of the uncertainty is at the poles.  With fresh ice having a freezing point of 0 C or 316 Wm-2 effective energy and salt water having a depressed freezing point of up to roughly -2 C, there is nearly a 10 Wm-2 range of realistic sink energy.  That would mean that the effective energy of the isothermal layer would have the same range which is roughly a +/- 1 C degree margin of error for the most stable reference shell.  That +/- 1 C variation in the deep ocean temperature is obvious in the ocean paleo data which tend to support the static model, but the range of normal variation is greater than the estimated impact of an extra 4 Wm-2 of atmospheric forcing. 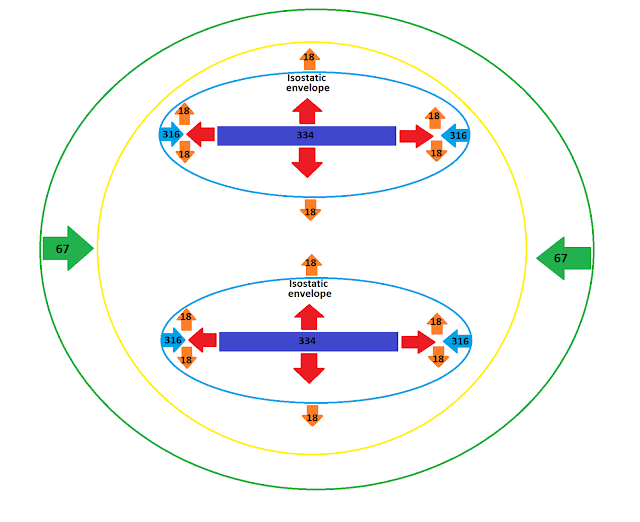 Assuming I haven't screwed up too badly this is were we are.  The light blue envelopes represent roughly 70% of the true surface, the green 67 Wm-2 is the closest to a true radiant surface that can exist and in between is at lest one but like more useful but imaginary surfaces.  Since the model is static, the faces of the two moist air envelopes would be in balance.  The could expand or contract, but are fairly stable.  The distance from the green radiant layer to the yellow intermediate layer can fluctuate in some range for zero in that Antarctic in an exceptionally cold winter to roughly 30 kilometers above the tropical "surface".  That change in distance is small relative to the radius of the surface, but at the poles, that distance is more significant with respect to the moist air envelope.  The relative position of the yellow is dependent on the energy flow out of the blue envelope that cover only roughly 70% of the surface.

I know that this is confusing, but since the only two reliable "black body" surfaces, the 67 Wm-2 pure radiant layer and the 334 Wm-2 approximate liquid ocean sub surface or "average" energy, vary in surface area by approximately 160 million kilometers squared, meticulous detail is required or the error can be +/- 30% .

I can try to make a simpler model and prettier drawings, but a minimum uncertainty of 12.6 Wm-2 versus the +/- 17 Wm-2 estimated by Stephens et al and a potential of 30% error due to irregularly oriented and sized "black body" surfaces, is not going to go away.
Posted by Unknown at 7:12 AM