GISS and the Millikelvin Kerfuffle

The AGU poster by Dr. Vaughan Pratt discussion on Climate Etc. continues into the New Year with more than the average amount of heat.  Dr. Pratt produced a "fit" both in HadCRUT3 to AGW and in the "skeptic" community.  I actually liked the concept though am a bit bummed that OpenOffice doesn't care for Dr. Pratts' Excel spread sheet macros.

Dr. Pratt's SAW would represent natural variability and the AGW curve of course the impact of CO2 primarily, since CO2 is the master of our current universe.  The "fits" are impressive, but fitting an assumed function to an outdated "average" can be misleading.

The curve fit required a roughly 15 year shift and due to filtering, the ends of the data are not reliable.  There is also the issue of is "average" the value to fit? 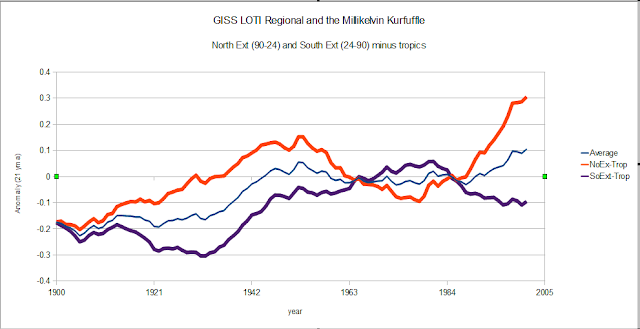 The plot above is the hemispherical difference between the northern hemisphere extratropic and the tropics and the southern hemisphere extratropics and the tropics.  Since it was claimed in peer reviewed literature that "internal variability" cannot be responsible for large changes in the "global" average temperature, it has to be so!  That greatly simplifies the problem since despite any evidence to the contrary, that naughty "internal variability" will average to zero over some convenient time frame.  Looking at the plot above, someone not familiar with the assumed law a natural variability might think that the relationship between the northern and southern hemispheres is a tad more complex.  On a "global" scale, internal variability appears to only be causing about 0.2C of the fluctuation, but since the fluctuations by hemisphere are out of phase somewhat, I would think knowing whether that is the norm or just happenstance caused by the period selected for the analysis could be a little bit important.

Well despite the assume law of "natural internal variability" there are peer reviewed papers that note:


This kind of haline effect, and the possibility of increased Antarctic sea-ice and land-ice, lead us to conclude that the thermal response to the opening of Drake Passage could have been fairly abrupt
and quite large, perhaps as large as the 4–5°C cooling seen in palaeoceanographic observations.

Since the authors of that paper have also noted that "this kind of haline effect" can have irregular periods as long and longer than the 161 years of which ~21 are not used due to the methodology (filter width) and 15 year questionable due the "shift" to fit, Dr. Pratt's poster is a fine example of curve fitting that has no meaning unless "global average" is the correct metric to use, the assumed "law of natural internal variability" being inconsequential is valid and the data selection and length are a reasonable representation of the "norm", other that that, Pratt's poster rocks.

What is interesting in the other "fit", is that "skeptics" assume that the poster represents some final nail in the coffin of CO2 dominated climate discussion and has to be retracted.  It is not, it is just another tool in the tool box to use for honing in on the degree of CO2 influence on climate.  Pratt's fit, fits nicely into the range of comfort one would expect if one assumes that natural internal variability is close to negligible.  The question is, is it?