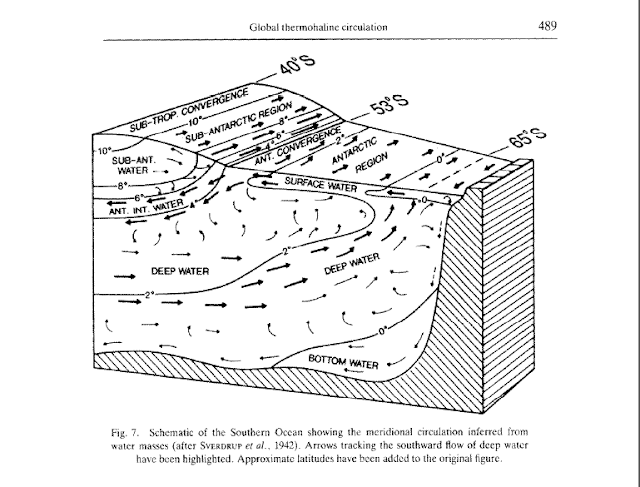 The surface area of the band between 55S and 65S is roughly 22 million kilometers squared, is nearly all ocean and has sea water flow of rough 120 Sverdrup.  One Sverdrup is 1 million cubic meters of water per second.  The Gulf Stream flow is roughly 30 Sverdrup.  In the drawing above borrowed from the Toggweilder and Samuels, Effect of the Drake Passage on the Global Thermhaline Circulation paper in the link, the average surface temperature of the 55S to 65S band is 1 degree.  If that band was blocked, there would be less surface mixing of the deep ocean and cold polar water.  Since the area of that band is about 22 million kilometers squared or 4 percent of the total surface area of the planet, the average temperature of that band roughly 4 C cooler that it would have been without that flow and with the total being roughly 120 million cubic meters per second, the impact of that Antarctic Circumpolar Current could be 6 times 10^22 joules per year.  Since 1960, the heat capacity of the ocean is estimated to have increased by 24 time 10^22 Joules or about 0.5 time 10^22 joules per year.  To some it would appear to be obvious, that the Drake Passage opening could cause some climate change.

This is where the battle of the models starts.  In part deux (with the supplement linked) I estimated that the current ocean "average" temperature produces a near ideal black body shell or surface with a near constant radiance of 334 Wm-2.  That surface only covers ~ 70% of the total surface of the planet.  Since it only covers 70% of the planet, that energy would appear to be .7*334=233.8 Wm-2 spread over the entire surface of the planet.  The remaining 30% of the Earth's surface doesn't have the surface material properties required to produce a near constant energy flux, unless it is covered with sufficient thermal mass, read that as ice, snow, or water.  Since the areas outside of what I describe as a moisture envelope do have huge volumes of ice, snow or water at times which has a latent heat or enthalpy of fusion of 334 Joules per gram and one can approximate Joules per gram as Watts per meter square, the melting and freezing of the ice and snow would provide a "buffer" to the 334 Wm-2 approximate ideal black body surface that only covers 70% of the surface of the Earth.  Changing the storage area and volume of ice, snow and water on the 30% less than ideal portion of the true "surface" would change the "buffering" capacity.

In the oceans, due to salt depression of the temperature of fusion, the range increases to roughly -2 C (307 Wm-2) with the same latent heat of fusion, 334 Joules per gram.  That increases the range to ~ 27 Wm-2.

Many will find some reason to question the validity of assuming a melting area of snow would produce an effective 334 Wm-2, but mixing less that ideal radiant surfaces with complex internal heat transfer and storage capabilities is also questionable.  Let the better model prevail.

The Drake Passage opening did two things, it limited the surface area at the southern pole to store the buffering ice and snow and it improved the thermal mixing of the oceans.  The Antarctic continent became thermally insulated or isolated depending on personal preference.  Once isolated, the band of surface from ~55S to 65S remains in the range of roughly 4 C to -2 C at the edge of the Antarctic sea ice.

With a total volume of the oceans of approximately 1.3 billion cubic kilometers and one billion cubic meters per cubic kilometer, the Drake Passage could provide a complete over turning of the world's oceans in approximately 412 years at 100 Sverdrup per second if I got the math right.  Equilibrium after a respond to any change in forcing should require at least 412 years to be realized if the mixing is ideal.  Ocean condition we measure now may well be due to changes 412 year ago for ideal to 4120 years ago if the mixing is only 10% efficient.

While the static model is less than perfect,  it indicates an equilibrium "sensitivity" of 4.8 Wm-2 per degree, with an estimated time constant of a minimum of 412 years with a range of "average" ocean temperatures from 1.16 to 6.8 C if 4 C is the very long term "average" temperature of the oceans.  That would make climate sensitivity to ALL forcing is limited to 5.6 C degrees or a maximum upper limit from today's 4 C oceans to 2.75C as the maximum increase likely due to ALL forcing from today's conditions.