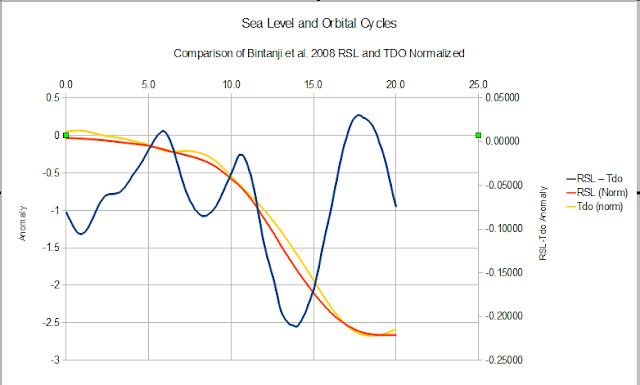 Since I was a little bored today I started thinking about the Bond Events with their weird 1470 +/- 500 year pseudo cycles.  Pseudo cycles drive most folks nuts.  To me they are the fun part of the puzzle.  One of the theorized drivers of Bond events is the ~1800 year lunar orbital cycle.  At 1800 years it could be involved, but the 4,300 year pseudo cycle related to the precessional cycle would seem to have a greater impact on energy.  Well, the precessional cycle would also have an impact on tides.

So just for grins I took the Bintanji and Van de Wal Arctic reconstructions and compared their relative sea level (RSL) and Temperature of the deep ocean (Tdo).  I have to normalize both over 20,000 years in this case and invert the RSL, since for some reason it is inverted as best I can tell in the download.

Voili La!  Your typically nasty looking 4.3 ka pseudo cyclic phenomenon.  The variation is small, but since the reconstruction is for "global" sea level it would not indicate how much polar amplification may be associated with that small variation.

So if someone tells you that the Sun or the Moon done it, they may be right, but the mechanism is pretty complex, involving changes in the rate of deep ocean mixing and tides freeing or fixing polar sea ice.  Really big tidal events could do things like breaking free the West Antarctic Ice Sheet in chunks here and there, tweaking geomagnetic fields a touch, cycling volcanic activity, all sorts of fun stuff that have nothing to do with changes in atmospheric or solar forcing.

That is pretty neat really, since there are a lot of weird things that correlate but shouldn't really have the arse to cause climate change.

If I can get this laptop to handle larger spread sheets, I might just get back into the paleo stuff for a while.
Posted by Unknown at 6:00 PM