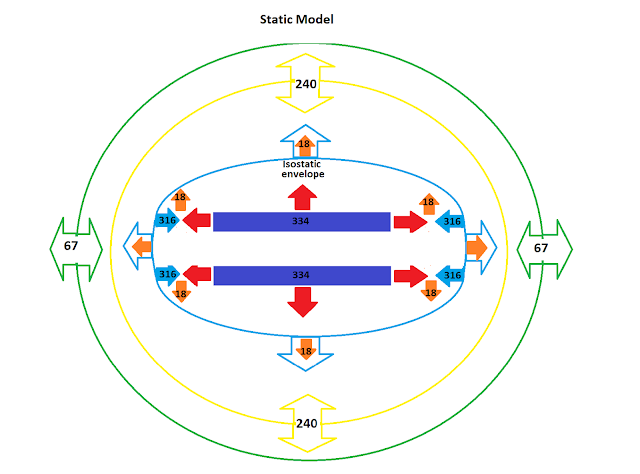 The static model is a work in progress.  Since there is a difference between the Northern and Southern Hemisphere thermal characteristics and the internal heat flow between hemispheres can take centuries to come to some level of equilibrium, the static model would need to be sliced and diced into sections to be really useful.  My slicing and dicing though can be difficult to understand.  The sketch above may make my ramblings easier to follow.

Staring from the outside, the 67 green shell represents an isothermal envelope that encloses the entire surface of the globe at all times.  That shell or outer spherical surface, is not an arbitrary selection.  67 Wm-2 is: the equivalent energy of a surface at 185 K degrees (-88 C degrees) which is roughly the lowest temperature even measured at the surface of the Earth, the black body temperature of Venus, the approximate minimum temperature of the surface of Mars, the minimum out going long wave radiant energy of deep convection clouds on Earth and an all around nice number.  The surface area of that shell can vary, but due to gravity and lack of significant convection, is relatively stable.

The inner blue "shell"  is what I call the moist air envelope.  The 316 Wm-2 is the equivalent energy of a surface at 0 C degrees, the freezing point temperature of fresh water.  This shell is less stable and only covers approximately 70% of the true surface of the Earth.  Since salt water has a lower freezing point, the orange arrows represent the approximate range of likely variability with respect to absolute temperature.  This envelope or shell can and does expand, contract and shift over portions of the true surface.

The yellow shell or envelope is the largest question.  The temperature and energy of that shell is unstable, covers an unknown fraction of the true surface and is likely completely useless, but that was the "reference" shell selected by others I am forced to use.

This post is a supplement to a supplement, Tale of Two Greenhouses Part Deux Supplemental.  Instead of having to imagine a blue torus surrounding the belly of Earth, now you have a not very spherical core that is the approximate true "black body" portion of Earth.
Posted by Unknown at 10:48 AM