This is one of those posts that will grow for a while.  There was a question about how well BEST and CET correlated in the bassakwards climate reconstruction in the 2000 years of Climate post.  The eye and the math can be fooled when it comes to quantifying a correlation.  One big issue is that CET and BEST "Global" have different smoothing due to the different areal coverage and the changing number of instruments included.  You shouldn't smooth any time series before estimating a correlation, but they all ready have been due to the nature of the beasts.  So I think you have to get creative, to a point. 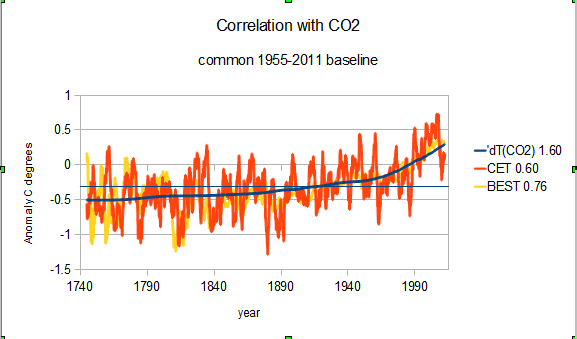 One handy tool is CO2 response.  Since the common baseline period is 1955-2011 due to the inclusion of the Ocean Heat Content data, here I use the average CO2 concentration for the baseline period as a reference then adjust the CO2 "gain" so that the mean of the overall period for CET, BEST and dT(CO2) 1.6 equal.  dT(CO2) is the natural log of CO2 concentration divided by the reference concentration quantity divided by ln(2) times 1.6 which is 1.6C per doubling of the reference concentration.  The correlation of dT(CO2)1.6 with CET is 0.6 and with BEST 0.76 with the reminder that BEST includes process smoothing that CET doesn't.  Both of the time series were treated to a 27 month smooth just to see what is happening plus they where scaled to the common 1955-2011 baseline in the reconstruction.  Lots of caveats, but the 1.6C agrees well with most of the newer "global" climate sensitivity estimates.

There is another consideration needed with using CO2 as a reference.  This correlation uses CO2 concentration alone while there are other greenhouse gases and other influences on atmospheric forcing included in the reference which have to be isolated somewhere probably by someone a hell of a lot smarter than me.  However, until that day arrives, I think that directly comparing CET to BEST more than just by eyeballing is worse than useless.  A better way is to compare individual reconstructions and times series to what should be common influences.  This is quite a bit contrary to "normal" convention since smoothing is used as a tool to maximize correlation to determine the impact of smoothing by other processes, "global" versus regional averaging, paleo deposit times, differences between atmospheric and ocean response and likely a lot more.  The methods need to be tailored to the data meaning that checks and balance have to be tailored to the method if you want to avoid rabbit holes.

This particular method appears to be a keeper, but time will tell.

This first update shows what happens when you include another common influence. 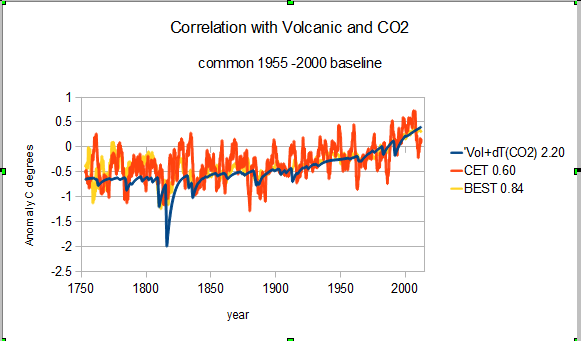 Using the same CO2 reference including the Crowley and Unterman Volcanic forcing estimate requires increasing the reference CO2 impact from 1.6 to 2.2 C per doubling.  At this point the CET correlation is the same indicating that the CET region thanks to ocean influences has less volcanic impact and that BEST global land has a greater volcanic impact.  Perfectly logical because of the differences in heat capacity.  While my treatment of the C&U volcanic deserves inspection, the 0.6C difference in the reference CO2 impact implies that volcanic forcing had approximately a 0.6 C degree impact on "global" land temperatures.  Volcanic forcing has a very interesting impact on the oceans due to "memory".  In the North Atlantic where the Thermohaline Current (THC) is mechanically forced into the narrowing ocean area, Volcanic forcing can appear to lead or lag response and the initial response can be in phase or anti-phase with expectations.  Anet et al. have a paper in discussion at Climate of the Past on the impact of Solar and Volcanic influences on tropospheric temperatures well worth the time for those interested.  It is in discussion though and the whole subject is liable to be in discussion for some time.  For what I am doing though, Volcanic has different impacts on different time series is more than adequate.

This second update is more for the confused about correlation crowd. 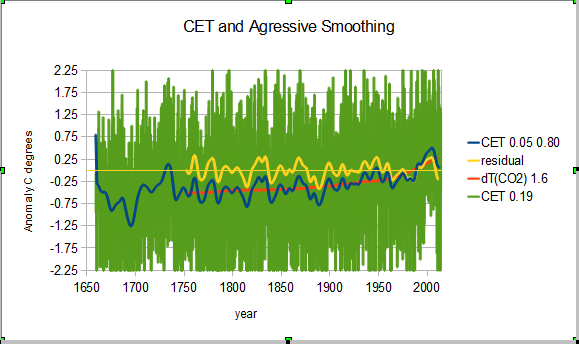 This is the CET data in monthly form and with overdone cascade smoothing.  The green CET has a 0.19 which is the correlation with CO2 from the 1753 start to 1910.  The overall correlation is 0.20 so there is not much difference between the first and last parts of the data.  In blue the 0.05 is the correlation up to 1910 and the 0.80 is the correlation after 1910.  80% correlation sounds great but really doesn't mean much.  In yellow is the residual of difference between the dT(CO2) curve and the smoothed CET.  When the mean of the residual is zero, then the ln(CO2) curve should be about as close a fit as possible.  I could use the raw CO2 concentration numbers and get the same correlation but not the zero mean "fit" without some scaling which ln(CO2) curve provides or a scaled anomaly of the CO2 concentration would provide.  To get a higher correlation I just need to increase the slope.  So if I cut off the "pause" at the end of CET, I would get a better correlation and a slightly higher "sensitivity" to CO2.  I could also change my correlation start date to a deeper valley like ~1890 and get a better correlation and higher "sensitivity". 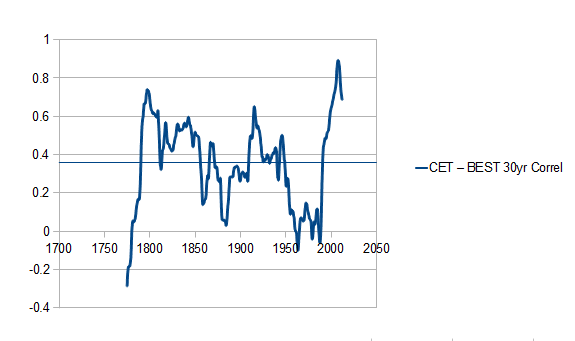