Once More into the Basic Non-Linear Dynamics Breach

Come on gang it is not that complicated.  The Earth is not a rubber ball bouncing around in space.  It is a planet with various fluids at various densities some with latent energy laced phase changes.  You get interesting internal pseudo-oscillations as the planet attempts to find a new happy place.  You can call that happy place anything you like, but it is not really "equilibrium" and it is not really a steady state.  Quasi-steady state works for some, conditional equilibrium for others, but for now let's just call it the happy place. 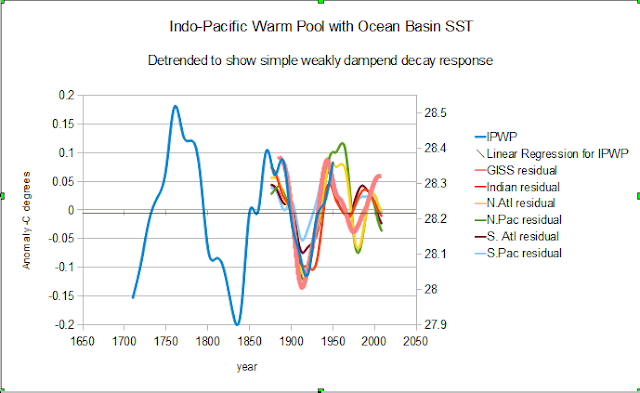 If I grossly over smooth the various ocean basin sea surface temperatures after removing my estimate of combined atmospheric forcing and compare them to the Oppo et al. 2009 Indo-Pacific Warm Pool reconstruction, also detrended, you see what is called a weakly damped decay curve.  You whack the system hard and it takes time to re-discover its happy place.   The new happy place doesn't have to be the same as the old happy place.   It is a big planet, it will call the happy place shots.

If you ignore its old happy place, you are assuming you are smart enough to know where a 4.5 billion year old planet will find its new happy place and when.  I don't mean this in a bad way, but unless you have error bars as large as the past standard deviations in happy places you will most likely be wrong.  The "average" happy place deviation is +/- 1.25 C degrees for 70% of the planet's watery surfaces.


Even though the water surfaces are likely the best indicators of future happy places, folks are fond of the "Global" mean surface temperatures so let's take a look.

If you assume that "climate" has a transient response (TCR) of 2.5 C per doublings of CO2 equivalent forcing your "fit" looks something like the darker blue dT(CO2) 2.5 curve and if you subtract GISS and HADCRUT4 from your TCR you get the two residuals shown.  Follow the dark blue curve to the left and you can see that means you are assuming that something less than about 0.7C degrees below the 1951-2012 mean is "normal".  If you use 0.8 for your TCR you are assuming that about 0.2 C maybe a little lower is "normal" relative to the 1955-2012 baseline.

If you assume that when the mean of the residuals is zero that you are close to the TCR, then you have a "normal" for 1.88 C TCR of about 0.5C less than the 1955-2012 baseline average.  Note that the 0.8C curve still hits about -0.2C.  0.8C is on the low side of the mythical "no feedback" climate sensitivity based on the estimates of the actual "average" surface temperature, DWLR,  "average" temperature of the world's oceans, the "ideal" black body temperature of Earth, the latent heat of fusion of water and the approximate mean temperature of the marine atmospheric boundary with the average "global" diurnal temperature range throw in for good measure.  In other words, 4C - 334.5 Wm-2 is very likely one of those "strange attractors" the chaos math geeks yak about.

There may be nothing at all special about 4C, however, to reach 5C will take on the order of 250 to 500 years which some think is more than enough time to resolve a few of the pesky details.  One of those details is just how much precision do you think you can get estimating what a planet is going to do looking for its new happy place?

Was that any better?