With all the climate reconstructions available I thought I would try one with a little bit different approach.  There is only so much instrumental data available and most of that is in the northern hemisphere on land of course, but there is a good bit of ocean data.  After comparing regions of the ocean, the Indian Ocean basin has about the best correlation to "global" surface temperature, "Global" mean sea level and "Global" ocean heat content.  So I started with the Indian Ocean basin, 60S-30N by 20E-147E masked using the KNMI Climate Explorer ERSSTv3b SST data that starts in 1854.  That data is my reference.

The Church and White Global Mean Sea Level (GMSL) data is available at the Colorado University Sea Level research website along with the current satellite data I used to extend the Church and White series to 2013.  The Leviticus et al. Ocean Heat Content (OHC) data is available at the National Oceanographic and Atmospheric Administration (NOAA) ocean data center making up the main core of the reconstruction.

The OHC is only available from 1955 in quarterly format which I interpolated to monthly just to have a common format.  Using the common baseline period from 1955 to 2011 I scaled the GMSL and OHC data to match the ERSST masked Indian Ocean trend for the common baseline.  Then since there is the Berkeley Earth Surface Temperature (BEST) data available at their website, I figured I would scale that in as well. 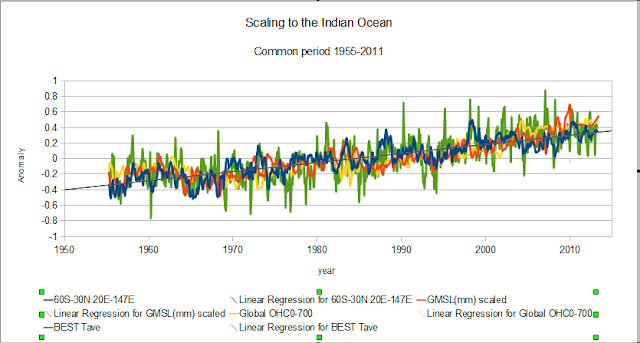 This is a chart of the baseline period and how the linear regressions line up.

Once that is done the full monthly combination back to 1743 looks like this.  I took the liberty of infilling some of the missing BEST data with simple interpolation just to get all the data available involved.  However there is more instrumental data out there that extends even further back in time, the Central England Temperature (CET) series which since England is located near the termination of the Gulf Stream, should have some correlation with OHC and GMSL.  That data is available at the MET/Hadley Center website.  Using the same baseline period, the CET was also scaled and allowed to joy the fray.

As you can see the CET data is quite noisy since it is a smaller area and you can see that as you go back in time the BEST data also becomes quite noisy.  So I used a simple 27 month moving average to remove some of the noise in this next chart. 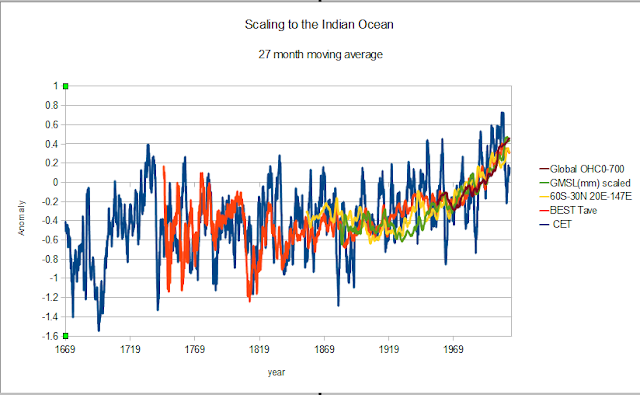 The correlation between CET and BEST is not fantastic, but they do share some common features.  The ultimate goal of all this is to combine instrumental data with the Oppo et al. 2009 Indo-Pacific Warm Pool reconstruction available at the NOAA climate data center website.  Scaling all the instrumental to match a paleo reconstruction might be a bit bassakwards, but it is interesting. 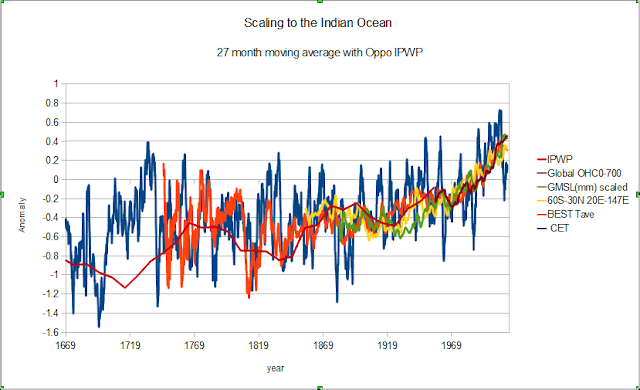 The Paleo fit is really not bad in my opinion considering has natural and a little anthropogenic smoothing involved.  Not perfect by any stretch but not too bad. 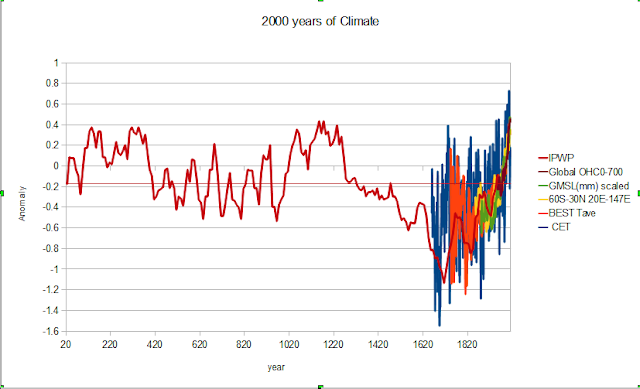 The IPWP data is not scaled since it should relate to the Indian Ocean SST data and in this Redneck version of the hockey stick the mean of the 1955 to 2011 instrumental period is about 0.18 C greater than the mean of the 2000 year IPWP reconstruction which includes some indication of the period formerly known as the Little Ice Age.  There is considerable uncertain that I am not even going to bother estimating at this time since the error margins of the BEST and CET data are available for those wishing to check.  Paleo reconstructions can look a bit different working back from the "Good" data to the questionable data.
Posted by Unknown at 5:09 PM