Impact of Asymmetry on Forcing Correlations

Food for thought for the faithful that have written off Solar forcing, asymmetry and huge thermal inertia can do weird things.  One is that volcanic impacts can appear to lead forcing and another is the same thing can happen with solar forcing. 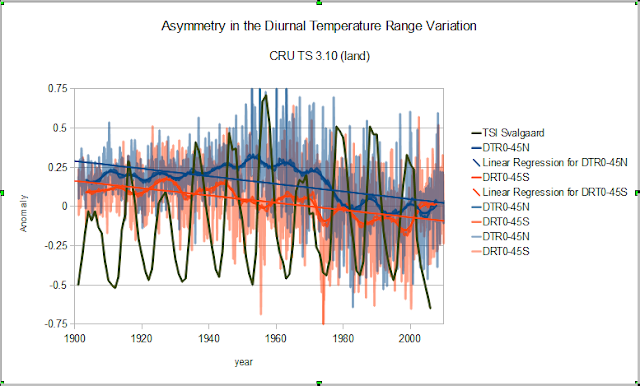 When you compare the Svalgaard solar to the Climate Research Unit diurnal temperature range anomaly differences between the hemispheres the is a hint of something but not really much to write home about.  Even Lief Svalgaard notes that sun spot number derived Total Solar Irradiance (TSI) is weak and questionable.  Sun spot counts do vary and the actual cause is still a bit of a mystery.  There is some relationship between SSN and climate in most "Eyeball" comparisons, but when you try to quantify the impact, there is never much that is definitive. 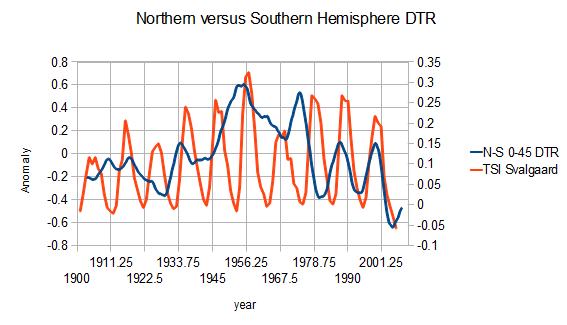 One of the biggest mysteries is the lead/lag relationships.  Earth climate obviously cannot cause Solar sunspot variation and there is no consistent internal lag that correlates well enough to impress linear minded analysts.     There is so much going on the the complex ocean energy transport mechanics that solar/climate links can be extremely frustrating.  Most of that is likely due to the common orbital forcings that due to differences in the internal heat transport of the Earth and the Sun cause similar but different responses to each object.

Earth has common internal response times that are not fixed.  Variations in surface winds and polar sea ice extent vary the internal poleward heat transport.  There is a roughly 28 month settling time for meridional imbalance that leads to the Quasi-Biennial Oscillation and a roughly 8.5 year bulk ocean mixing layer "charging" time constant for Earth versus a 9.5 to 12 year solar pseudo-cycle associated with the Sun's changing magnetic field.  Tidal forcing, even very weak forcing, can alter the mixing efficiency of both the Earth and the Sun as they seek meridional "equilibrium" only to have the weak forcing change.  Both are constantly "hunting" for some happy medium they can never obtain or maintain if they did.

Using the "normal" concept of "forcing" and "feedback" that emphasizes energy balance in purely radiant or thermal terms, the mechanical forces that actually move the thermal mass  tend to be ignored or minimized when they have a much larger impact that deserves more respect.  Just because a correlation doesn't make "sense" doesn't mean it doesn't exist.  It just means the analysis has gaps that need to be filled.  The impact of asymmetry on the response to a common weak forcing is a much more interesting puzzle that assuming it away will never solve.

Perhaps this new year will lead to new approaches to learn instead of assume.