This is a quickie for curiousnc, obviously an alias, that wonders how to confront the more devout minions of the Great and Powerful Carbon.  First, there is nothing "anti" science about being skeptical.  There is actually more that is "anti" science about being a naive believer of everything "science" like it is some replacement for a lost divinity.  Scientists are people and every very smart people screw up. 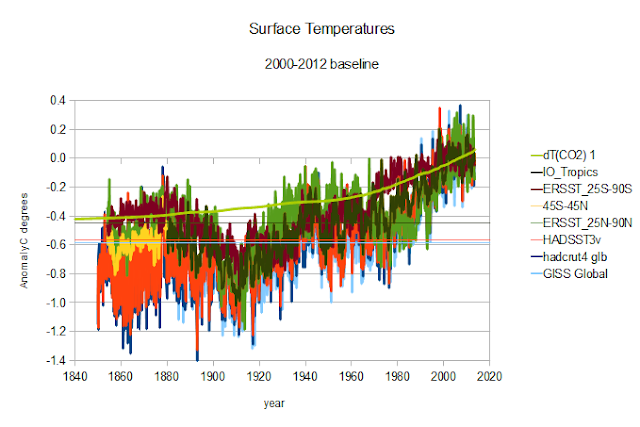 CO2 is a greenhouse gas because it has a C, Carbon with two Os, Oxygen.  That three atom structure allows more motion or vibrational states which can store energy.  It doesn't store energy very long, but since it can store more energy it is more likely to absorb and emit photons of energy that "fit" the different energy states the configuration of the molecule allow.  More atoms, more energy states, generally.  H2O is a greenhouse gas as well as CH4, O3 and a number of other gases.  It is "estimated" that a doubling of CO2 and equivalent gases will produce approximately 3.7 Wm-2 of additional resistance to atmospheric heat loss.  As far as CO2 equivalent "dry" gases go, there is not much of an argument about the physics of the process.  There is a great deal of uncertainty and debate over how much "surface" temperature increase a doubling will cause.  The chart above show dT(CO2) 1 or how much CO2 all by itself "should" impact climate with a variety of "surface" temperatures.  The CO2 impact and all of the temperature series are adjusted to the same 2000 to 2012 baseline.  This allows you to back track what CO2 should have caused.

You will notice that the dT(CO2) 1 C per doubling of CO2 equivalent concentration just hits the peaks of the various "surface" temperatures.  Looking at the impact this way you would not be including volcanic, solar and other possible "cooling" impacts that could impact your estimate. 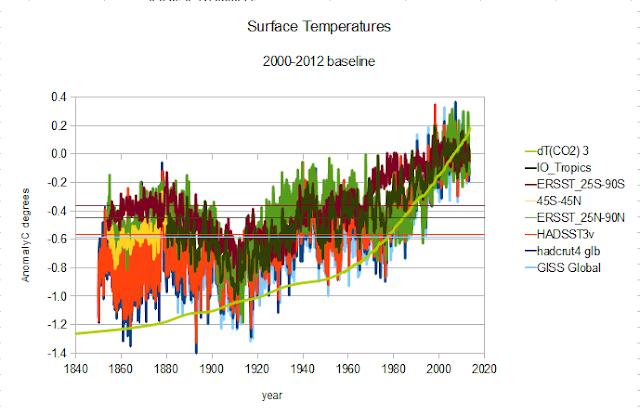 This chart uses dT(CO2) 3 C per CO2 equivalent doubling that used to be the mid-range impact expected due to a doubling of CO2 equivalent greenhouse gases.  This curve barely hits the minimums of the "surface" temperatures. 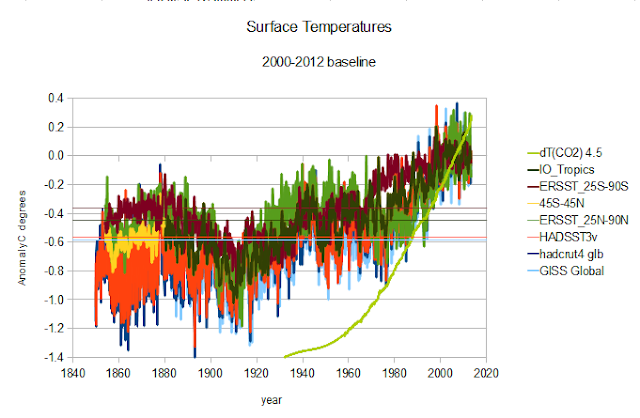 This is the same chart with dT(CO2) 4.5 C per doubling of CO2 equivalent gases the former high range of climate sensitivity.  If there was no long term delayed impact of CO2 forcing, then this estimate indicates that the previous ice ages are what is the desired "normal" temperature for our planet Earth "surfaces".  The minions of The Great and Powerful Carbon prefer to use the 3 and 4.5 C per doubling impacts even though the "generally" accepted range of estimate impact has decrease to 1.6 C per doubling and appears to be headed to the 1 C per doubling or less because the Human scientists over estimated the impact and really don't care to admit it.

That is why some are skeptical.
Posted by Unknown at 1:25 PM