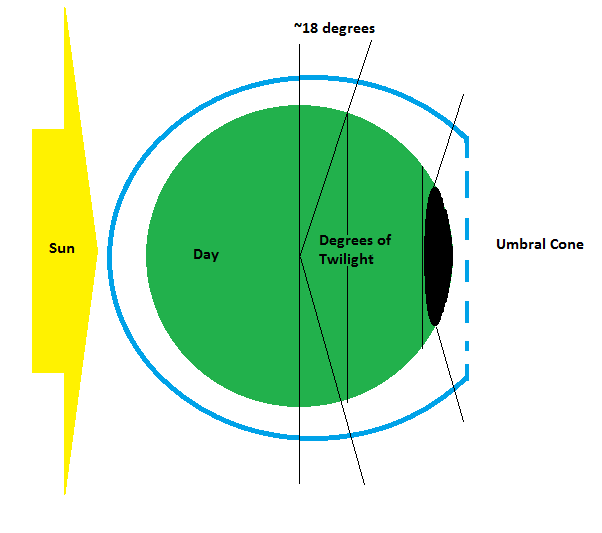 This is my attempt at a graphical depiction of the actual geometry that needs to be considered for Earth's Energy Balance.  It is not a simple TSI/4 with dozens of fudge factors to make things work out.  The reason this is required is there are two ends to the atmospheric effect, source and sink.  If you vary either or the path between the two you would vary the energy balance.

With the Sun providing ~1361 Wm-2 on average, the full area of each active layer of the atmosphere and surface should be considered.  The upper atmosphere due to greater surface area and transparency produces a lens effect providing twilight illumination to the umbral cone.  The area of the twilight regions vary with altitude and transparency of the atmospheric surfaces.  The solar radiation path length varies as well which would impact the amount of energy absorbed in the atmospheric layers. 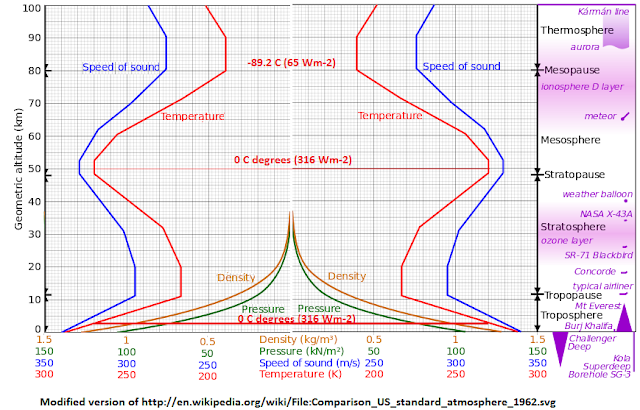 As a rough estimate, with the Turbopause effective energy close to 65 Wm-2 and a source of 1361 Wm-2, 65/1361=0.477 or 4.77% of the available solar energy would be absorbed in the highest portion of the atmosphere.  Using the standard estimate of out going long wave radiation, 240Wm-2, the relative area of the Turbopause would be 240/65=3.69 time the effective area of the not well described "effective radiant layer" producing the 240Wm-2 of OLR.  Using the normal TSI/4 which includes half sphere area correction and abrupt day/night transition, the relative TOA umbra area would be (4-3.69)/4=0.0769 of the actual sea level surface area.

At the Stratopuase, the effective radiant temperature is 273.15K (316Wm-2)  which as a percentage of the TSI input is 316/1361= 0.23 or 23% of the available energy.  Again, the specific heat capacity of this layer of the atmosphere, stratosphere to TOA, would limit the amount of energy it could retain.  The upper atmosphere provides limits to the total amount of radiant energy that can be retained, using repetition for emphasis.

Viewed from space, the 316Wm-2 Stratopause contained inside of a stable 65Wm-2 Turbopause would appear to be a 316-65=251Wm-2 radiant layer if the areal difference/specific heat capacities where not considered.  The appearent OLR would be ~240 Wm-2 if the differences where considered.

Since there is no stable atmospheric layer that maintains a 255K (240Wm-2) effective temperature, there is no reason to assume 255K as a reference other than mathematical happenstance.

Using a more realistic reference, the Stratopause, the ratio of effective TSI assuming a black body with no atmosphere to Straopause would be 316/340=0.929 or 92.9% of an ideal black body.

The Stefan-Boltzmann equation includes a correction for less than ideal black body performance of 0.924.

Since a large portion of the radiant physics used in climate change is based on black body approximation, it is surreal to consider number of fudges and approximations used to avoid the obvious.  Earth is not a Gray Body, but a multi-layered black body.