Is the Twilight Region a Mistake? - Only the Shadow Knows 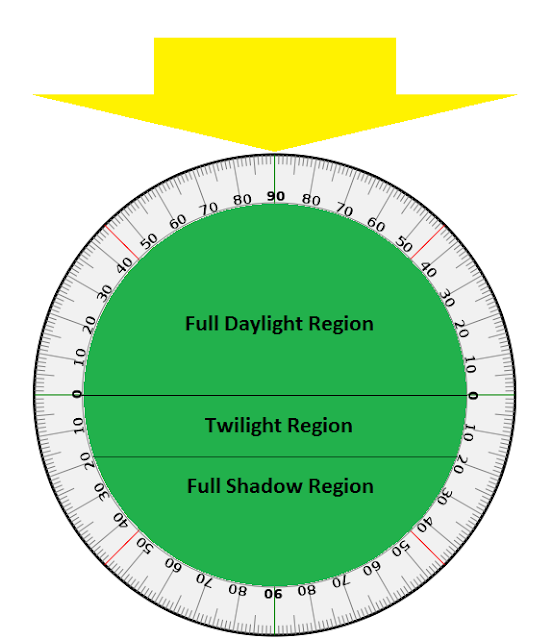 Since the Earth is spherical with an atmosphere that is transparent a good deal of the time, there may be more involved than simple half sphere averaging required to determine the actual solar energy provide to the "surfaces".

The Sun provides a reasonably constant 1361 Wm-2 at the top of the atmosphere (TOA) which should be approximately 100 kilometers or more above the physical sea level surface.  NASA determines the "average" Total Solar Insolation to be 1361/4=340 Wm-2 ignoring rounding choices.  That 340 Wm-2 is based on the Day Light Region illumination of a flat disc transferred to a sphere.  The area of the flat disc is pi()R^2 and the area of a sphere is 4*pi()R^2, so 1361/4 is the calculation.  For a peak insolation or day light only the TOA twice or 680 Wm-2.

Due to the transparent atmosphere, there is refraction of the sunlight at sunrise and sunset causing a twilight period.  This causes a bit of confusion as it results in Astronomical, Nautical and Civil Sun rise and set times.  Variations in atmospheric conditions can change the apparent timing of the official sunset or rise.  From the center of the Sun, Civil is 6 degrees, Nautical 12 degrees and astronomical 18 degrees below the horizon.  Nautical sunrise and sunset are the first and last moments where the horizon is clearly visible for using a sextant to determine your position by the stars. The drawing above is based on the astronomical definition of 18 degrees.  Since there are 360 degrees in a circle there are 15 degrees per hour, so the twilight periods are around one hour long.  Photographers call it the golden hour though there are actually two golden hours per day.

Part of the reason for the different definitions of sunrise is location.  On the ocean there is always a level horizon.  On land, variations in altitude and terrain can reduce the "apparent" time of first light and scientifically it doesn't matter if you can see it or not, it is there.  Despite the differences, there is light before the Sun is actually visible. This photo borrowed from Wikipedia is a good example of twilight conditions and the orange tinge to the Moon illustrates how the warmer wave lengths of light bend or refract in the atmosphere.  That light is energy taking the longest possible path through the atmosphere.  A longer path length increases the possibility of absorption in the atmosphere.  So more than the simple disc area is illuminated at any point in time and that illumination is energy that may be absorbed at various altitudes in our atmosphere as well as the surface.

With the TOA receiving a less than ideally estimated 340Wm-2, since it does not consider the twilight region, it is not all that surprising that the effective energy of the surface is approximately 390Wm-2 or 14.7% more than the less than ideal estimated Total Solar Irradiation.

I must assume that there is some "minor adjustment" made in the more serious calculations, but all the literature I have seen doesn't appear to include this twilight energy.  Imagine that?

Here is a link to NASA Earth Energy Budget and a neat graphic. 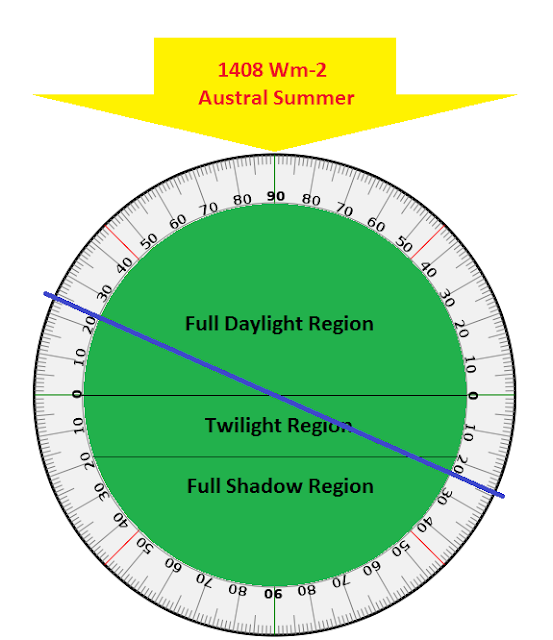 Consider the differences between Austral Summer and Winter. With greater insolation in the Southern Hemisphere, the Northern Hemisphere because of the ~23.5 degree axial tilt has a smaller full shadow region.  Greater atmospheric absorption with the higher solar input would tend to create milder Winter temperatures though atmospheric variations would cause greater variability. 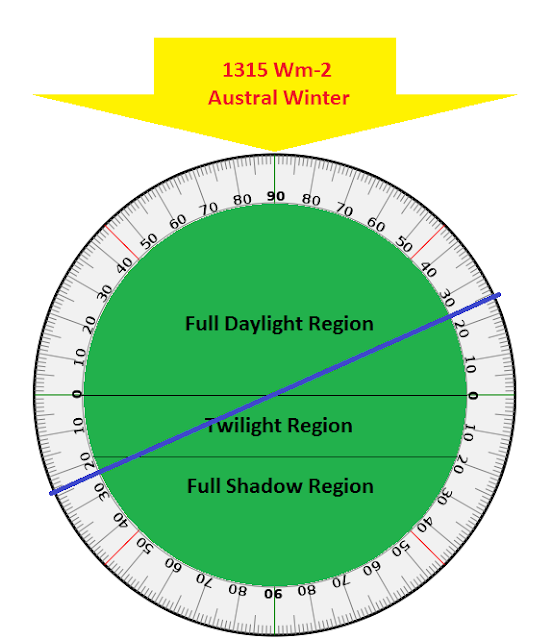 In Austral Winter, the axial tilt would also reduce the shadow region as the Earth rotates, but the lower solar input would tend to cause colder average temperatures and less variability as there is less energy to fluctuate.

While there is nothing particularly new about atmospheric refraction and seasonal solar variability, simple averaging and up/down radiant modeling does not capture the range of solar energy that is available or the complex interaction between surface energy and solar energy at various levels of the atmosphere. 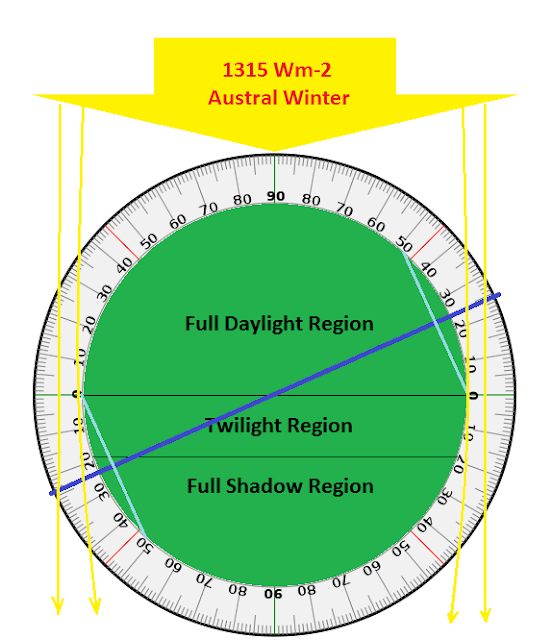 How much the flat Earth assumption impacts the estimates of total TOA solar energy is hard to determine since atmospheric conditions and solar variability are factors, but with ~18 degrees of twilight and an approximately 24 degree axial tilt, the near surface effect could extend to within 6 degrees of the true pole.

Think of it as a solar powered space blanket.  While the twilight hours are not the warmest of the day they are far from the coldest.  Here is a rough estimate of the possible error neglecting the twilight hours might have on the Earth Energy Budget.

Note that there are indications that Solar variability has greater influence on the Quasi-Biennial Oscillation (QBO) and Southern Annular Mode (SAM) which would be consistent with greater upper atmosphere absorption in the twilight region.  Something worth pursuing.


Also a little something on Air Glow. 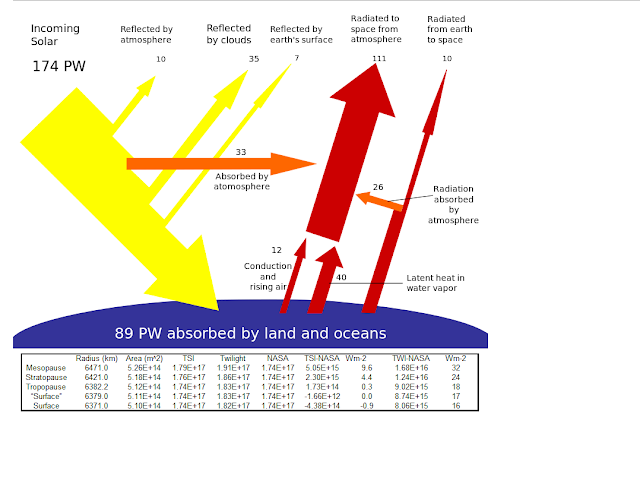 One of the Earth Energy Budget "cartoons" is in petawatts.  Since there has been some confusion in my mind about what is the actual "surface" as well as the actual TOA.  It appears that the Surface is approximately the atmospheric boundary layer (ABL) or about a  kilometer above sea level equatorial radius of ~6378 kilometers as the normal radius of Earth.  Surface selection is pretty important since CO2 forcing is only estimated to be ~3.7 Wm-2 and the range of error noted in the Wm-2 columns for TSI/4 or the flat disc estimate and the twilight uncertainty can range up to 32 Wm-2.  This budget also uses the higher 1366 Wm-2 TSI estimate which by itself is ~5.9 Wm-2 greater than the estimated CO2 doubling forcing.

As I mentioned above, there are likely quite a few adjustments made to "close" energy budgets.  Stephens' et al. noted that due to all the variables that the "surface" energy imbalance is on the order or +/- 17 Wm-2.  Imagine that?
Posted by Unknown at 5:21 PM