Do You Really Want to be a Minion?

Climate Science would be a lot more interesting without all the yes men and wanna be minions for the great and powerful Carbon.  Being part of the Dihydrogen Monoxide gang requires completely clearing your mind of any individualistic thought processes.  Those capable of thinking outside of the Carbon box can actually look at the world around them and observe reality.

CO2 does have an impact on radiant heat transfer.  That isn't really the debate.  The question how much impact and if it is detrimental.  Just because there is change doesn't mean it is a bad thing.  One of the more interesting aspects of the boring radiant physics is that CO2 has different impacts over land and oceans because of the other and much more powerful greenhouse gas Dihydrogen Monoxide, H2O or as I like to call it, water.  NOAA, the National Oceanographic and Atmospheric Administration collect data on the changes and conditions of the Oceans and Atmosphere.  They might not be a bad place to look for information an outside of the box thinking individualist might like to see in order to fact check the babble spouted by the wanna be minions.

By comparing the difference in the land and ocean warming by region instead of using a somewhat controversial "average" for the Globe, the outside of the box thinker could find something like this. 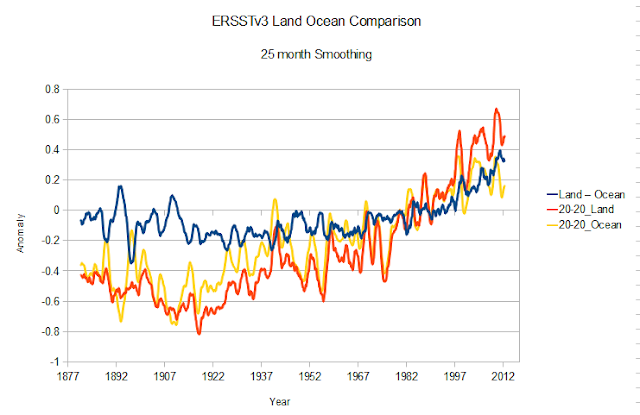 Other than the period from ~1970 to present, the Land above surface and ocean below surface temperature rose at roughly the same rate. 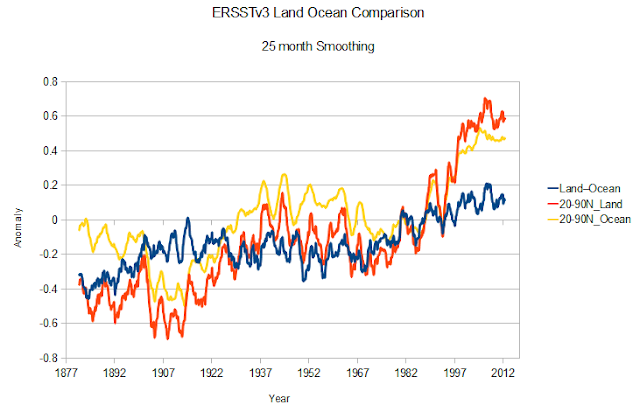 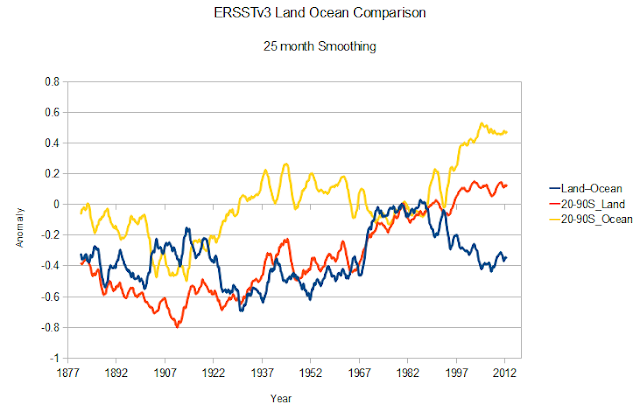 Comparing the Southern Extratropical region which has even more issues with coverage the shift circa 1970 looks a little bit different.  It shifts more rapidly then inverts.  During the 1900 to 1970 period that was so well behaved in the other regions, the southern extratropics have what could be called a sinewave or oscillation due to the ocean sub-surface temperature data.  In order to be good minions, this data should be avoided like the plague.  It would expose the fragile underbelly of the great and power Carbon.

Personally, because of the issues with sub-surface versus above surface with sparse coverage and anti-phase response, I tend to avoid "surface" temperature data in favor of the ocean data which represents the vast majority of the energy in the ocean/atmospheric system.  Satellite data also is a much better "metric" than the mixture of above surface (Tmax+Tmin)/2 and sub-surface sea surface temperatures.  The data is usable "as is" but is adds a great deal of uncertainty that the followers of the great and power Carbon tend to rationalize away.

There is much more data at the NOAA Extended Reconstructed and Massaged Sea Surface Temperature version 3 now with Land massage too data site for the outside of the box thinkers to peruse should they be of such an inclination.
Posted by Unknown at 7:27 AM