With "Global" temperature not playing along all that well, land temperature anomaly gets more emphasis by the Catastrophic warming minions.  Land temperatures due to lower specific heat capacity and greater albedo change range are a lot more variable than the boring sea surface temperatures which contain the vast majority of the global energy and drive climate.  So I thought it would be about time to break out some other data for the land only portion other than BEST which is being upgraded or something making it difficult to download data that is complete. 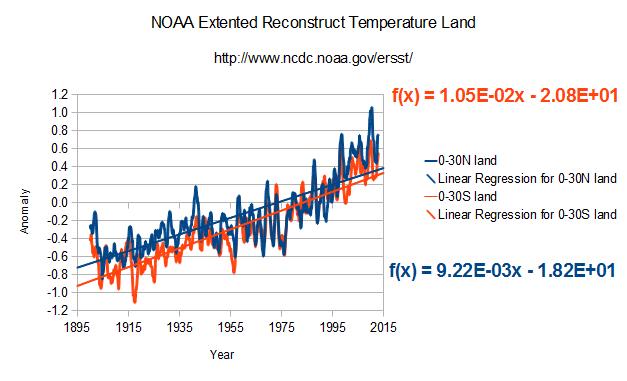 The NOAA Extended Reconstructed Sea Surface Temperature data version 3 also has land only in annual and monthly formats.  Above is the equator to 30 degree latitude data for both hemispheres (13 month smoothing) starting in 1900 AD.  The southern hemisphere has a slightly greater slope and less of a shift in circa 1976.  The 1976 great climate shift was a northern Atlantic and Pacific event which in this latitude band barely shows the shift. 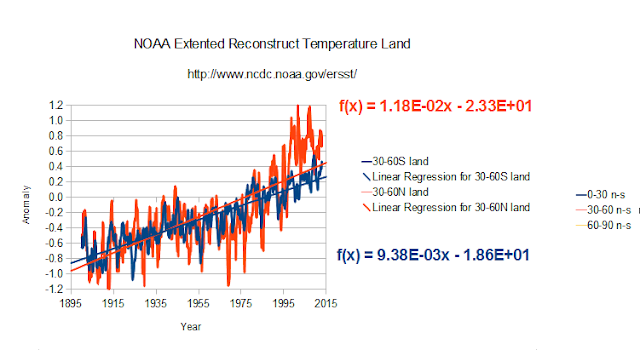 The 30 to 60 degree band shows a much larger land impact due to the great climate shift of 1976 only the shift started prior to 1976.  The northern hemisphere shifted more inline with the great collective farming efforts which are of course ignored by the minions.  The 60 to 90 degree band has a great deal of noise in the southern hemisphere, so much I doubt it is of much use, so I am not going show a plot.  30 to 60 degrees by the way is the prime wheat latitudes and wheat was used not only for food but for financing the grand plans of various governments.  Allowing 5 to 10 years for the collective stupidity to suck the virgin lands dry, you have a not too bad correlation with land use changes in the NH.  As you can see, the southern hemisphere trend shows no signs of anything other than fairly steady warming of nearly a degree per century.  That warming cannot be due to recovery from the little ice age because the minions say so.  Sure looks like it to the less brain washed though.

Unfortunately, the ERSST v 3 land data does not include the Tmax and Tmin separately, at least in an easy to download version.  BEST may make it a little easier to do zonal comparison when they release their combined land and oceans data set in the near future.  Here is a direct link to the ERSSTv3 ASCII time series data.
Posted by Unknown at 4:27 PM