I get a ration of grief from some of the climate blogging faithful about my approach to situation.  There is more than one way to skin a catfish and that is part of the fun.  Most recently, I noted that the twilight hours provide more than enough energy to not be negligible, not Earth shattering news by any means, and that that energy is not properly accounted for, that is a little more interesting.

Since sensitivity is in units K/Wm-2 or Wm-2/K, for a 1 degree change in absolute temperature there would be a corresponding change in energy based on the Stefan-Boltzmann equation.  So sensitivity for a surface at T degrees would be, T(s)/(5.67e-8*((T(s)+.05)^-(T(s)-0.5)^4)  which increases exponentially with T(s).  TSI/T(s) decreases exponentially with T(s), so you have a nice intersection if you want to solve it graphically. 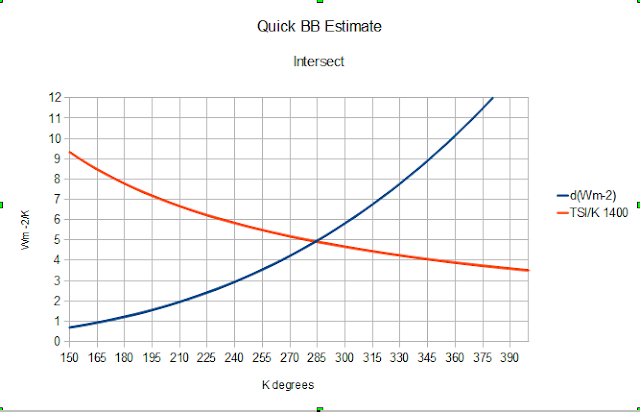 There ya go, a quick Black Body estimate that doesn't involve geometry.  That is kind of important because the geometry of a black body is not factor to begin with.  All a black body does is absorb as much energy as possible.  Shape and area are only a consideration when you try to measure the energy.  There are no perfect Black Bodies, so the Stefan-Boltzmann equation included a fudge factor of 0.926 which is unit less.  In my recent Imbalances versus TOA post I used a simple model that has a BB efficiency factor as a variable.  Since temperature and energy are related by T^4, that factor is (0.926)^.25=0.98 in case you were wondering.

If you look around you may find that the Planck response of Earth is supposed to be 3.3Wm-2/K.  That is based on ~254K degrees as the effective radiant layer temperature.  With 3.3Wm-2/K and a forcing of 3.7Wm-2 you would have the no feedback climate sensitivity of ~1.12 C degrees.  No feedback sensitivity temperature response has bounced around from a low of 0.8 C to 1.5C degrees.
Based on the generic Planck response, it should be 3.7/~5.0= 0.74 C degrees per 3.7 Wm-2 of forcing. 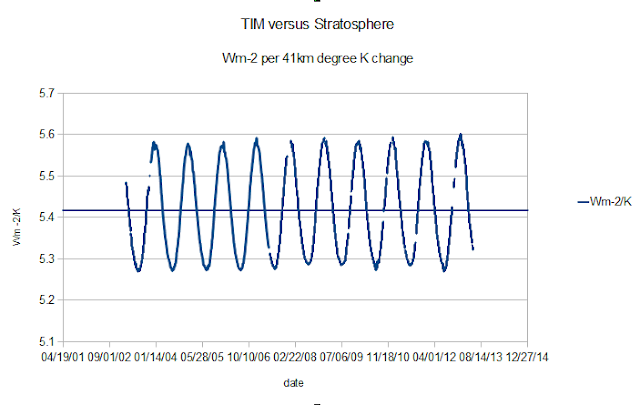 By comparing the 41km Stratosphere absolute temperature as estimated by the AQUA satellite data with the TOA seasonal TSI variation as determine by the Total Irrandiance Monitor data provided by SORCE, the average Planck response is ~5.4Wm-2 per K with a range of roungly +/-0.25 Wm-2 per K degrees. 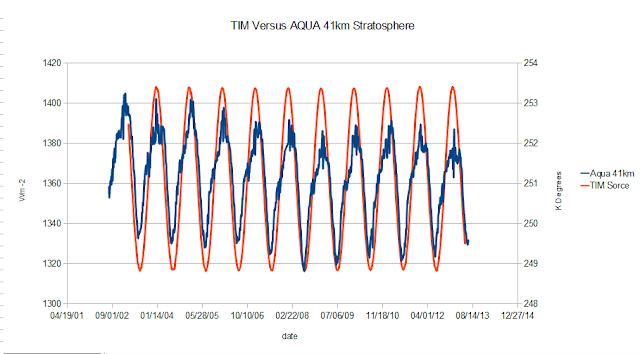 The average absolute temperature of the 41`km Stratosphere level though is ~251 K degrees which should produce the "benchmark" 3.3 Wm-2 per K degrees.  The 5.4 +/-0.25 Wm-2 is for a surface temperature range of ~283 to 292 K degrees, close to what the actual average surface temperature should be.  Yet another indication that a frame of reference in the chaotic troposphere was a very bad career move.

Radiant physics provides plenty of references, but none in the middle of a black body cavity which does not depend on the geometry of the cavity.

If you care to try this yourself, the AQUA data is at Discover AMSU Temperatures in daily format and the TIM data is at the lasp SOlar Radiation & Climate Experiment (Sorce) website.  One note you might wan t to make is that the Stratospause temperature at ~49 km is ~273K or zero C due to water vapor and that with ~88 Wm-2 of latent heat providing that ~315Wm-2 at ~0 C degrees, the energy is equivalent to a surface at 315+88= 403 Wm-2 or roughly 290 K degrees, right in the range estimated with the AQUA and TIM data.

This is beginning to look like there are serious model problems.