An interesting poster was linked where a modeling group focused on the "Cells".  Hadley, Ferrel and Polar atmospheric convection cells.  These cells are initiated with convection, rising air, and provided spin by Coriolis and rotational forcing.

"Ideally" you could show the three common cells with associated high pressure regions where the cooled air falls back to the surface.  There are three common cells because of the distance to delta T ratio.  Using degrees instead of distance, there is about 1degree per degree C with a lot of variables.

Since the tropical region is the warmest and the polar region the coldest there are limits, there has to be an odd number of cells.  If I removed the Ferrel cell in the middle the polar cell would be overwhelmed by the Hadley cell leaving just one big Hadley cell.  There could be a change that produces a 5 cell regime, but for stability, the three cell per hemisphere is what we normally have.

What ratios would make the most stable three cell per hemisphere structure?

The degrees show are based on the typical idealize drawings you would see in Wikipedia.  Using 255 million square kilometers per hemisphere, the idealize drawings would indicate 127 mkm^2 for Hadley, 93.5 mkm^2 for Ferrel and 34.5 mkm^2 for the polar cells.  Based on fractals using the Golden Ratio the areas would be 127.4 , 78.8 and 48.7 mkm^2 respectively changing the latitude convergences to ~30 and ~55 degrees provided the Hadley cell originated at the equator.

The Hadley cell for the northern hemisphere though originates at the Intertropical Convergence Zone (ITCZ) which shifts but is currently close to 15 degrees north latitude.  Considering the current ITCZ the Golden Ratio would indicate areas of 94.6, 58.5 and 36.1 mkm^2 for stability.  That would put the polar convergence zone at ~60 degrees and the Hadley/Ferrel Convergence at ~38 degrees with the ITCZ located at ~15N latitude.  A 15 degree shift in the ITCZ would produce about an 8 degree shift (30 to 38 degrees) in the mean maximum northern hemisphere westerlies. 
I focused on the Northern Hemisphere because the Antarctic Circumpolar Current (ACC) "fixes" the southern region polar cell to nearly the ideal 48.7 mkm^2 area.

So what is up with all this?  The poster by Bill Langford of the University of Guelph titled, Hadley Cell Expansion in Today's Climate and Paleoclimates

uses a different approach discovering that symmetry or more accurately asymmetry due to the ACC needs to be considered.  That's natural variability folks complete with climate shifts on long time scales.  Greenhouse to Ice House kind of abrupt shifts sports fans pretty much like A. M. Selvam's Penrose fractal analysis predicts.  Score one for the whackjobs which brings me to the title of this post. 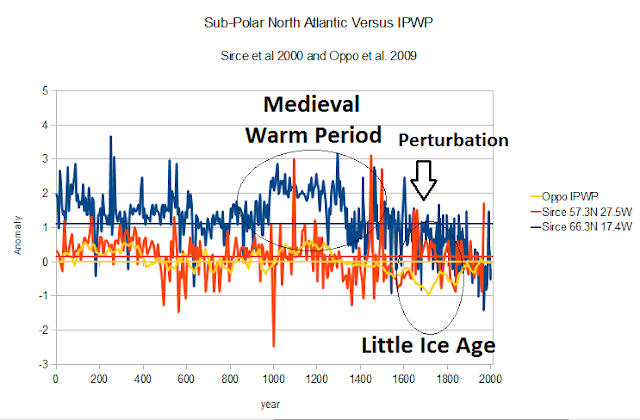 Possible millennial scale shifts due to purely internal dynamics.
Posted by Unknown at 7:47 AM