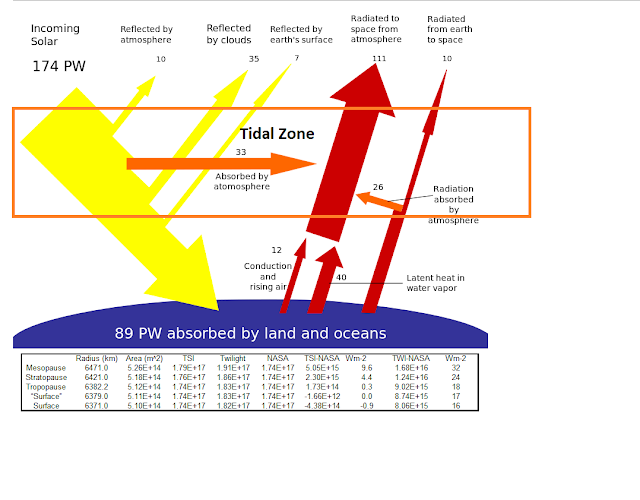 If you have a problem that is ridiculously complex you are going to simplify parts of the problem to at least have something that appears manageable.  If you find a solution that appears to work within some reasonable limits, you have made progress.  You have to be careful with those limits though.  The more adjustments, aka fudge factors you have to incorporate to maintain those limits the less likely your model will be useful.  Climate is one wickedly complex problem which means your simple model with simplifying assumption will turn into a wickedly complex model if your limits or tolerances are too restrictive.  Statistical mechanics provides for a range of uncertainty that is "good enough" for most needs.  If you need more precision you could be biting off more than you can chew.

In the above graphic borrowed from the Wikipedia article, Earth's Energy Budget.  That graphic is the only one to survive and it has a few issues, but it is useful for this post.  I have added a box, Tidal Zone plus a table at the bottom that shows some rough estimates of more missing energy.  That more missing energy would be due to simplifying exclusions, i.e. somewhere between 5 to 25 percent of the atmospheric mass is not included in calculations and timing.  Depending on the type of energy and time of absorption of that energy, energy absorbed in the atmosphere has roughly 50% of its total felt at the "surface".  70Wm-2 absorbed in the atmosphere would have about a 35Wm-2 impact at the surface.  If that energy is absorbed at the time when peak energy is absorbed at the "surface" it has less impact than it would if it were absorbed near the minimum "surface" energy.  This is really the Greenhouse Effect (GHE) in a nut shell.  With an approximately 340 Wm-2 atmospheric effect, i.e. Down Welling Long-wave Radiation (DWLR) average, you have approximately half or 170Wm-2 of GHE.  If all of that energy is due of the atmosphere absorbing Outgoing Longwave Radiation (OLR), then all of that would be due to the GHE, but the atmosphere also absorbs Short Wave (SW) energy from the Sun and to a lesser degree reflected or scattered SW energy.

The OLR estimate of 88Wm-2 is roughly equal to the latent energy transferred from the "surface" to the clouds in the Atmospheric Boundary Layer (ABL) between 0 and ~5 kilometers above the "surface".  The "radiant" portion of the Atmospheric/GHE would start above the ABL if you consider a margin of error in the range of +/- 5% to simplify this wicked problem.  Water, Water Vapor and Ice, dominate the "surface" to atmosphere heat transfer below the ABL with only a small amount of actual radiant transfer involved, mainly latent and conductive transfer is involved with the conductive portion often being ASSUMED negligible or near negligible.  For some reason convection, which is only possible because of conductive or radiant energy transfer to a fluid is used instead of the actual means of initiating the convection.  That is another simplifying ASSUMPTION.

Using all of these simplifying assumptions, the uncertainty at the "surface" is approximately +/-17 Wm-2 or an order of magnitude greater than the estimated imbalance cause by changing the well mixed greenhouse gas composition of the atmosphere.

If you consider the two ranges, 170Wm-2 based on DWLR estimates and 100Wm-2, half of the estimated atmospheric absorption of SW and OLR, there is a range of +/-35 Wm-2 with an "average" atmospheric effect of 135 Wm-2, basically there is another +/- 17Wm-2 that is not typically discussed in climate science circles. Most of that additional +/- 17 Wm-2 is the atmospheric window. 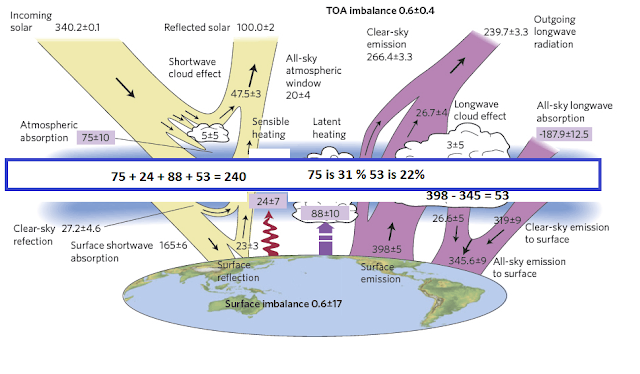 Graeme Stephens Et al. recently produced their own Earth's Energy Budget which was discussed at the Climate Etc. blog.  I have modified their graphic showing a portion of what I am calling the tidal zone.  Their ratio is 31% and 22% instead of the 33% and 26% estimated in the Wikipedia budget.  The difference is the All-Sky Atmospheric Window estimate of 20 +/- 4 Wm-2 instead of 40 Wm-2.  You don't just misplace 20 Wm-2 in a wicked problem where you are predicting major impact from a 3.7 Wm-2 change in GHE forcing and expect it to go unnoticed.  You should look for the simplifying assumption that caused the screw up.

That appears to be the assumption that the only part of the atmosphere that matters is the first 11 kilometers which contains approximately 75% of the mass of the atmosphere while ignoring that 25% above the approximate average altitude of the Troposphere.  The Twilight period before sunrise and after sunset is due to refraction/defraction of sunlight in Earth's Limb, is not too surprisingly of the same magnitude of the screw up mainly due to the areal differences between the assumed "surface" and the middle atmosphere, but also due to the timing. 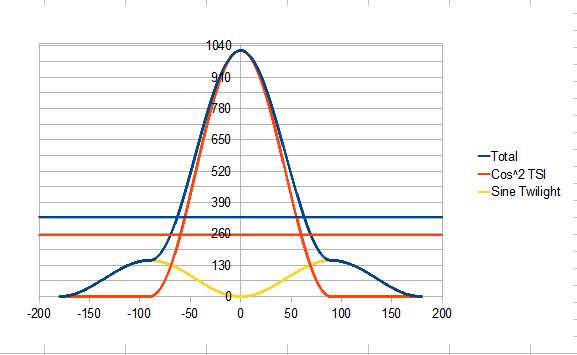 In a cryptic post I compared the atmospheric effect to barbeque, specifically rotisserie barbeque.  The chart above is a illustration of the surface absorption in orange which peaks at local solar noon and the atmospheric "twilight" absorption that peaks near dawn and dust.  This is a polar view showing how the twilight just spreads out the "heat".  The total energy is not much different than the assumed TSI/4 estimate for a sphere. 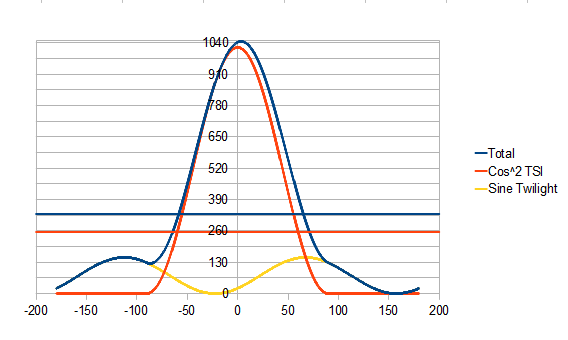 Near the equator the impact would be a little different because the average altitude of the Tropopause is nearly twice that of the poles. These images taken by the International Space Station of Earth's Limb perfectly illustrate the differences that atmospheric conditions can produce.  What is missing is something not so obvious, tidal impacts.

There is a great deal of Cyclomania or trying to fit some or all of the "surface" temperature record to Astronomical and other cycles and combinations of cycles in order to "prove" something or predict something in the climate system.  All that Cyclomania "proves" is that there is a great deal of Self-Organized Criticality in the climate system.  Signatures of a Universal Spectrum for Atmospheric Interannual Variability in Some Disparate Climatic Regimes by Selvam, A. M. and Fadnavis, S. is a good example of a nonlinear dynamics/chaos theory approach to the complexity.

Energy absorbed in the atmosphere, all energy including mechanical/gravitational, impacts the shape and altitude of the atmospheric layers that absorb, refracts, defracts, reflects, transmits and scatters radiant energy.  The atmospheric tides.  All that means is the realistic limits for a solution to the wicked climate problem has to be large enough to include the normal variance, ~+/- 17 Wm-2.  From the Selvam paper, "Climate change will only be manifested as increase or decrease in the natural variability. However, more stringent tests of model concepts and predictions are required before applications to such an important issue as climate change."