Attack of the Lowess Form

Tamino, the proprietor of the Open Mind blog has a knack for twisting statistical reality.  Despite its limitations, Tamino has grown fond of Lowess or Loess Smoothing aka Local Regression.

"LOESS makes less efficient use of data than other least squares methods. It requires fairly large, densely sampled data sets in order to produce good models. This is because LOESS relies on the local data structure when performing the local fitting. Thus, LOESS provides less complex data analysis in exchange for greater experimental costs." per the Wiki link.

Okay, what the deal is Tamino got wind of someone saying the "Global" warming was as bad or worse prior to 1940.  There was a little ice age after all and things had been thawing out slowly for some time according to pre "Global" Warming, Climate Change, Climate Disruption, Carbon Pollution, climate scientists got involved.  Getting rid of the little ice age required a bit of novel statistical methods and even then there was still a nasty ~1C of dip in the way of serious Anthropogenic impact due to the Greenhouse Gas Effect theory.

As the Wikipedia quote states, Local Regression is not the first tool in the box that one should dig out for data that has already been averaged, scaled, weighted and other wise combined into a simple time series.  No method can predict the future of the time series so it is best to leave something to the imagination. 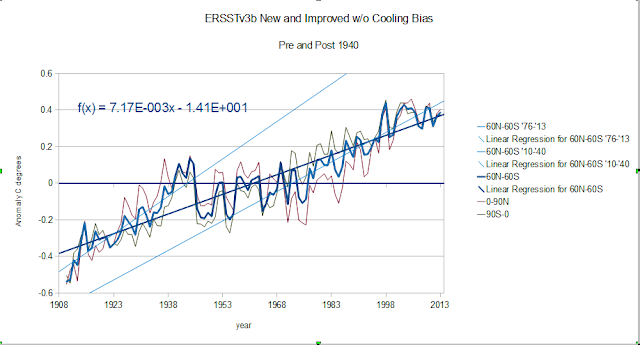 So here is a simple look at the situation.  Using the ERSSTv3b data for the normally liquid portion of the oceans, 1910 to 1940 had a pretty serious up tick in temperature. Since 1910 was about the coldest point in the instrumental data, the series uses 1910 to present as its baseline which you can easy see results in the zero mean blue line.  1910 to mean is about the same as 2013 to mean.  I could pick 1998 and get a little more up tick, but not much, the two periods are still about the same.  The slope from 1910 to 1940 is greater than the slope from 1976 to 2013 and would still be greater than 1976 to 1998 or any other point using 1976 as a starting point.  It may be somewhat inconvenient, but that is just the way it is.  There is no multiyear moving average, Loess smoothing or anything other than the annually resolved data from ERSST.

I could use just the northern hemisphere data in the light red to juice the slope a little, but that didn't really move above the mean until 1983.  Then if I use less than 50% of the globe, I can get a little scarier.  By including the land I could get the slopes closer, but the difference between 1910-1940 and 1976-2013 just isn't enough to write home about, possibly a tenth of a degree with a margin of error greater than the difference.  But it is nice to see just how Loess some will stoop to continue the "Global" warming tradition.
Posted by Unknown at 7:44 PM