How to Deal with Recovery from the Little Ice Age?

The Little Ice Age wasn't a true ice age since there was no massive glaciation, but it is generally recognized as a cooler than normal period, mainly in the Northern Hemisphere, but with some global impact.  The northern hemisphere is more sensitive to most types of climate forcing and feedback mainly because between 30N and 90N there is roughly a 50-50 split between oceans and land mass.  In the southern hemisphere from 30S to 90S there is an 85 to 15 Split with a large amount of the land mass poleward of 70 degrees south.  Oceans tend to dampen response to climate forcing and with little mid-latitude land to hold snow, there is less feed back.  Because of the differences in land/ocean ratio, the northern hemisphere above latitude 30 degrees, which represents about 21% of the global surface containing about 20% of the global oceans and about 48% of the global land mass is much more variable as far as temperature goes than the rest of the world.  Global Warming is supposed to be the issue but due to the 30N-60N sensitivity, regional changes can have a pronounced global impact. A large portion of the global population lives and farms in the mid latitudes of the northern hemisphere so it is worth a little special consideration, but it is a small fraction of the global climate picture.

Since the Berkeley Earth Surface Temperature was published it has become a bit of a default "alarmist" data set because the land surface temperatures are amplified.  The revised BEST website have even made a point of showing how much the mid northern latitudes have amplified warming, something that seems to be a bit of a surprise to climate modelers, and the Arctic polar amplification which is a bit less than estimated by the climate modelers.  BEST has even provided comparisons of their data to various models showing quite a few differences that should be addressed.  A lot of the discrepancy is likely due to recovery from the Little Ice Age and "hyper" sensitivity of the  region to volcanic and aerosol forcing.  Without a better estimate of the LIA impact the situation is not likely to improve.

"Globally" the LIA is estimated to have produced approximately 0.9 C of cooling peaking around 1700 or 1850 AD depending on the source.  The slide into the LIA started around 1400 AD depending on region and today's global temperatures are approximately the same as prior to the LIA.  The BEST land data has warmed more than 0.9C and the North Atlantic ocean from 20N to 70N used as the AMO reference has also warmed by 0.7 to 0.9 C depending on your choice of minimum.  Using 0.9 as a first estimate of the LIA "global" impact, I removed that portion from the BEST global temperature trend. 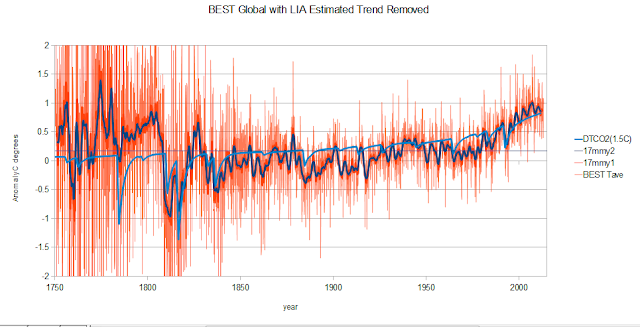 This is what that looks like.  The smoothing is 17 month moving average run twice.  Using the BEST combined CO2 and Volcanic forcing estimate available on their Summary of Findings page, with "sensitivity" set to the No Feedback estimate higher end of 1.5 C per doubling I included a rough fit.  The fit leaves a bit to be desired, but is just intended as a reference to no feedback sensitivity plus estimated volcanic forcing. As you can see though, the volcanic forcing tends to do its own thing which could be due to inaccurate estimates or other factors.  Climate can have lots of other factors.  Solar is another fact that once upon a time was a major factor. 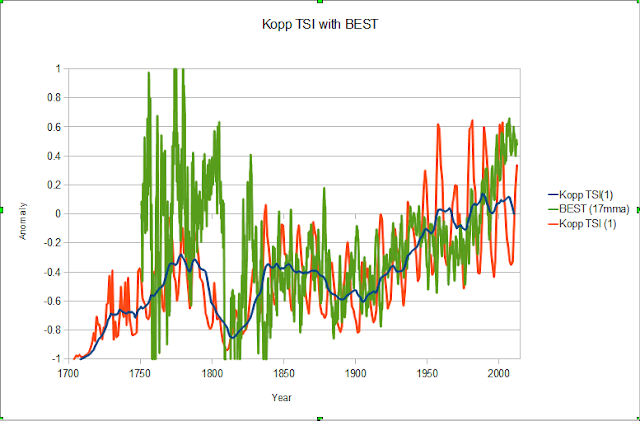 Back in the day you would see plots of Solar Sunspot Numbers (SSN) that were scaled to show how the sun drove climate.  That changed in the late 1960s along with a lot of other things in society.  Now that correlation is nearly meaningless because the new climate geniuses decided that all forcings are created equal.  A more efficient application of energy has never been on the same level as a less efficient application until climate science gathered steam.  The Kopp, G. TSI reconstruction is available from LASP Colorado which I have converted to anomaly using a 1950 to 2010 base line.  That puts 1700 AD at a 1 Wm-2 deficit or negative imbalance without adjustment.  Since solar is "applied" primarily in the equator region where there are plenty of oceans to suck up the energy, the actual imbalance allowing for atmospheric scattering is about 0.8 Wm-2.  The geniuses would use TSI/4, considering a perfect bowling ball surface getting 240Wm-2 on average instead of the steamy tropics that get closer to 1000Wm-2 peak on average.  Because of the averaging, solar just doesn't have the umph it had back in the heyday of thermodynamics.  Still, over 50% of the surface varying from 1000Wm-2 peak to 999Wm-2 peak is a small variation of only 1 Wm-2 which just happens to be about the magnitude of the current energy imbalance.

Volcanic forcing also impacts the incoming energy more than the outgoing and unfortunately impacts the northern latitudes more than the southern making things a bit complicated.  That creates a hemisphere imbalance that involves inconsistent atmospheric and ocean transport of energy on extremely difficult to model time scales to restore. 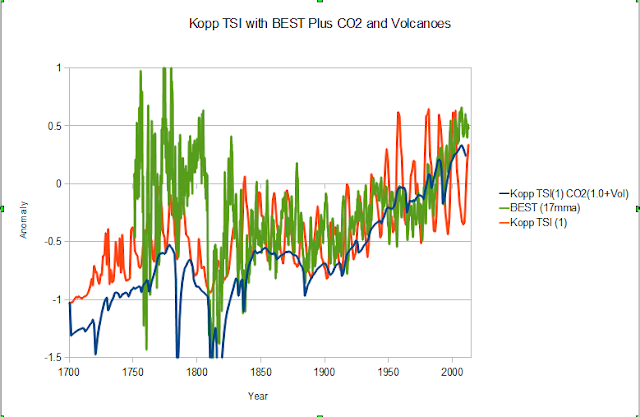 When I add the Best volcano forcing estimates with a 1.0C CO2 forcing to the Solar, I get the comparison above.  Still not perfect and likely it will never be since there would be albedo and more of the other factors to consider.  Things do appear to be moving the right direction in any case.  CO2 has some impact close to its no feed back estimates, Solar appears to have a larger than currently estimated, more like formerly estimated impact and the volcano data still leaves a lot to be desired.  I could play with the scaling to get a better fit, but there is really not much point.   It does look like I could remove the BEST detrending since the NH is so much more sensitive.  I will leave that for later. 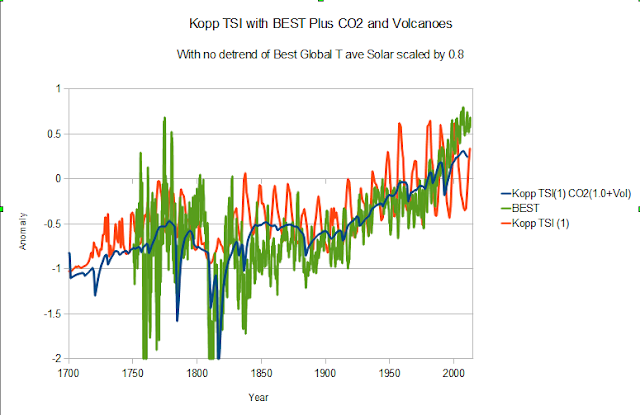 Here it is with no detrend of BEST and the Solar scaled down to 0.8.  Solar scaled to 0.8 would be about 0.4C for the global oceans which is a bit higher than most estimates but not outrageously high.  Due to land amplification, it is a better fit to BEST.

I just thought I would throw this out there for the Solar and Little Ice Age fans.  Y'all can pretty it up any way you like.
Posted by Unknown at 7:52 AM