OMG! It is Worse than We Thought!

With the Climate Change/Disruption/Carbon Pollution thing falling apart, the faithful are growing ever more desperate to find some link to cling to.  A couple of years ago I mentioned Land Amplification.  Land has a lower specific heat capacity than water so it tends to amplify warming in the oceans.  The oceans provide the energy for the planet's "night mode" of operation while water vapor and CO2 in the atmosphere regulate the energy leakage.  Unlike CO2, water vapor transports a lot of energy.  CO2 just interacts with the available energy since it is not a condensable gas at normal atmospheric pressure.  Specific heat capacity aka thermal mass is where the energy is, so follow the thermal mass.

Because land amplifies the ocean energy in night mode and solar in the day mode, land warms and cools much faster than the oceans.  Land temperature makes up only 30% of the global "surface" temperature average, but because of the amplification factor it has ~ 60% impact.  Temperature is not a particularly good indication of energy without a reference thermal mass. 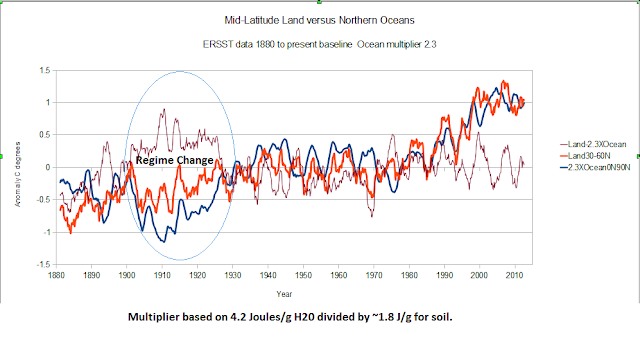 Trying to show the brain dead zombies that specific heat capacity has to be carefully considered is like trying to teach a dog to use the toilet.  I am sure it is possible, but why bother, get a cat.

So in the chart is have the ERSST "surface" temperature data for the northern hemisphere oceans and the mid-latitude land region where most of the agriculture, industry and human beings lived happily until 1979.  In 1979, people started realizing they were screwing something up and set to start fixing the problems.  Instead of looking at the obvious, water, they had to get more creative.  The chart shows that the difference in specific heat capacity directly base on water is a significant contributor to "global" warming.  1.8 Joules per gram is the rough specific heat capacity of moderately dry soil.  If you reduce the moisture content of soil it gets warmer quicker but holds less total energy.  Climate is all about changes in the rates of change, low specific heat capacity changes the rate of change.  Then should you use the maximum temperature and minimum temperature average, you get a bigger change than you would if you measure the mean temperature of the soil a few inches below the surface.  The ocean "average" surface temperature is based on the "average" energy below the surface.  Mixing the two creates a fruit salad.

The Minions of the Great and Powerful Carbon somehow got it in their heads that water vapor increasing will amplify the impact of CO2 in the atmosphere.  Way up in the atmosphere where there is just water vapor and just CO2, they are both effectively non-condensable gases so that is true, but near the surface water has a starring role as a temperature regulator.  If there is more surface water, there is more thermal mass, there is less temperature change for the H2O and CO2 in the dry part of the atmosphere to interact with, i.e. reduce energy leakage.

Now it gets to be really fun.  You can completely blow off radiant physics in the lower atmosphere, between the surface and the cloud/water vapor saturation boundary aka the Atmospheric Boundary Layer (ABL) because the radiant net energy flux is small relative to the latent and sensible energy flux.  The "global" average net radiant flux at the true surface is ~20Wm-2 of a total of 100+ latent and 35+ sensible.  20/135=.148 or approximately 14.8 percent of the surface outgoing energy impact is radiant and 85.2% is just plain old thermodynamics.  Because of confusing, the Head Minions of the Great and Powerful Carbon incorrectly estimated that to be ~30% or twice as much.  Ya think they are in a rush to correct that mistake?

I don't think so.  Now they are on about how the tail, low specific heat capacity air mainly centered over the mid-latitude is magically wags the Dog, causing warming in the southern hemisphere oceans pretty much like Northern Hemisphere Chlorofluorocarbons magically shot to the Antarctic Ozone layer.  They are preparing an exit strategythough,


Regardless of whether or not scientists are wrong on global warming, the European Union is pursuing the correct energy policies even if they lead to higher prices, Europe’s climate commissioner has said.

So it doesn't matter how wrong they are, Minions will stay the course.  Priceless.
Posted by Unknown at 8:40 AM