Solar impact on climate is both obvious and mysterious.  Without the sun there would not be a climate debate, but the solar cycles vary so little in terms of total energy that it is hard to explain anything but a small impact.  "Global" temperatures of the past correlate well with solar until recently leading many to ignore the Sun's contribution in favor of more tangible "forcing" elements that can be made to "fit" different periods using different metrics.  There are Eureka moments almost daily as someone finds a new pattern that appears to match a new data source at a different location looked at in a slightly different way.  Welcome to a chaotic system, it aims to please.

The reality is that a complex system has so many feedback functions with varying amplification factors that anyone can get completely lost in the noise.  In trying to explain, I have used a variety of static models that indicate you can only get so close with the information available and that it is probably better just to accept the limits and focus on longer and longer time frames to reduce some of the noise.  The Three Compartment Ocean Model indicates that there are likely settling time frames or constants of at least 500 years with shorter pseudo-cyclic patterns on the order of 62.5 years just due to the size and limited flow rate between ocean basins.  Near the surface of the oceans, shorter time frame settling noise with periods of 5 to 10 years produce much of the "weather" which may be isolated from climate, zeroing out over a limited period, or an indication of longer term climate, awfully hard to tell one way or the other.  Still, chaos theory implies that there is self similarity of the patterns on all time scales.  Theories are theories though, not laws, just suggestions.

To figure out how small variations in solar can impact climate I have played with the TSI data from Sorce and the satellite data.  There is an obvious solar impact, but correlations never are completely convincing. 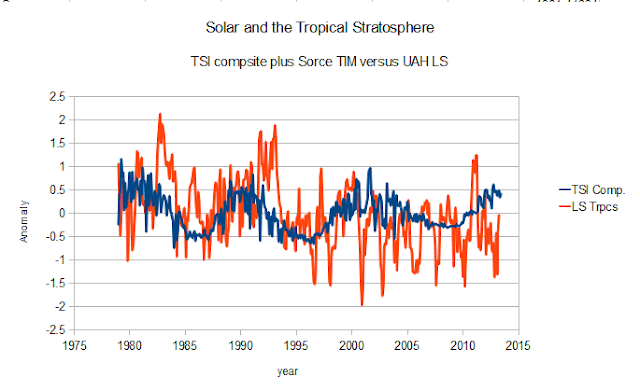 For example the solar TSI and lower stratosphere data provided by UAH show an obvious correlation, less than perfect, but obvious at least to my eye.  The lower stratosphere from what I have been able to determine tracks the ocean heat content well, but the stratosphere doesn't have the thermal mass to impress most climate junkies. 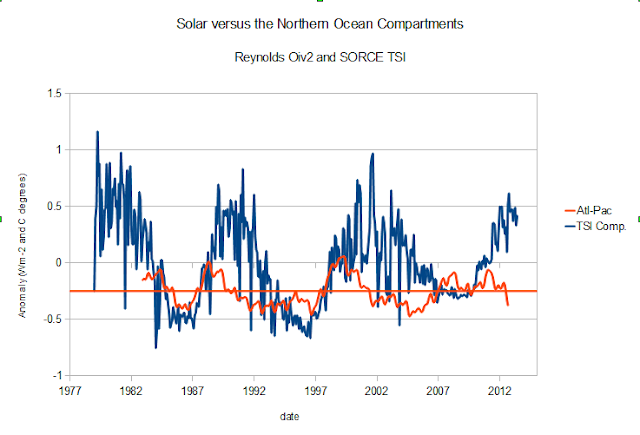 Comparing the northern hemisphere oceans, the detrended Atlantic tropics (0-20N, 20E-80W) minus Pacific tropics (80W-20E) indicate why the solar/climate relationship is so hard to quatify, threshold sensitivity.  The "pause" or plateau is an actual solar plateau at -0.25 Wm-2 roughly based on this scaling.  The differences between ocean basins settle quickly, ~2 to 3 years, but there is a response when the threshold is crossed.

Kind of interesting.  A longer term "staycation" on either side of the threshold should cause a gradual change in "climate" as far as surface air temperature and sea surface temperature are concerned.  Only one problem, solar reconstructions of the past are worse than most of the temperature reconstructions.

At the start of the IPCC series of reports, the solar "constant" was about 1366 Wm-2 and reconstructions by scientist like Judith Lean indicated that past solar variability was enough to drive climate until roughly 1950.   Since then, the solar "constant" has become 1361.1 +/- 0.1 Wm-2 and past variation is only +/- 1 Wm-2, about the same as then maximum estimated energy imbalance.  With the new and improved data, solar just can't do the job.  ENSO though, that natural internal variability can have some impact on climate but no one can agree on how much and since ENSO is an "oscillation", it doesn't much matter anyway, it will average out.  However, the comparison of of solar TSI and the imbalance between the northern Atlantic and Pacific oceans seems to indicate that solar can cause about 0.4C of variability with just the 11 years cycle so a prolonged solar minimum or modern solar maximum should be able to do about the same thing.

The typical way that solar impact is determined is TSI/4 since the Earth is a rotating sphere.  The tropics though don't require half of that 4 divisor,  about 1.414, the square root of two is more relevant to the tropics.  In day mode, the ~1 Wm-2 of solar variation would be felt as ~0.7 Wm-2 of change at the ocean surface in the 30N to 30S latitude band.  That is still a small amount, but compared to an ocean only imbalance of ~0.3 to 0.6 Wm-2, significant.  "Proving" that solar drives ENSO or more realistically the tropical ocean regional imbalances is not a slam dunk, but there is enough evidence and close enough energy available to mark a fair argument to that effect.  So what is the major malfunction? 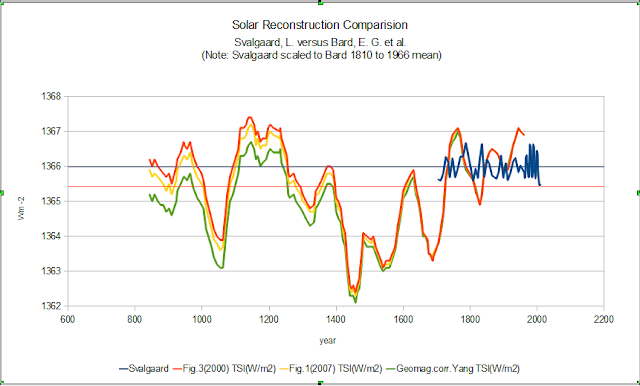 Well, comparing two of the Solar "TSI" reconstructions, we don't have an agreement on what "Top of the Atmosphere" and "Surface" really is.  The Svalgaard TSI reconstruction used above is scaled to the mean of the Bard et al. 1810 to 1966 mean value.  The blue line is the "modern" mean and the orange would be the past 1200 year mean.  Svalgaard's mean is actually 1361 Wm-2 +/- a touch which would be below the minimum chart value.  The Solar "Constant" has dropped nearly 5 Wm-2 since the start of the CO2 mania.

The Bard et al. estimated "TSI" is based on "surface" impact of solar variation using Carbon 14 and Beryllium 10 isotope ratios, per the Bard et al. abstract:


So one measures "surface" impact of solar variation and the other a "constant" at some point in the atmosphere that has changed for whatever reason since 2000.  I am sure both groups are competent at their jobs, but which is more relevant to climate science, actual surface impact or potential impact at some not all that well defined "surface"?