Some Guys are Just so Silly

When I discuss the impact of asymmetry with some of the guys on line, there are a few so totally clueless they can grasp the concept.  When I extend the discussion on the impact of asymmetry to the radiant "shells", they get totally lost.  First, the radiant shell is just a shape with uniform temperature which can be considered an isothermal "layer", but it has a real shape, not an assumed flat surface or disc that can be integrated over a surface of any assumed shape.  A black body cavity is a chamber where all radiant energy that enters is internally reflected until the entire cavity is at a single uniform temperature.  So a black body cavity is perfectly uniform in temperature and the shell containing the cavity would be at a perfectly uniform temperature.  No ideal black body or shell exists, it is just a "model" of perfection.  There is a difference between the two that needs to be understood.  The source of the energy in the cavity is not critical, only the temperature.  For the shell, exactly the same amount of energy that enters must leave or the shell is not stable.  Micheal Fowler with the University of Virgina has a nice tutorial for those inclined.

Since the oceans on Earth are the closest thing we have to an ideal black body cavity, the energy actually absorbed by the oceans which would have very long absorption path lengths with critical internal reflection, just like a black body, needs to be considered differently than energy that is reflected from the surface or absorbed but not deep enough to experience the critical internal reflection that leads to maximum absorption. 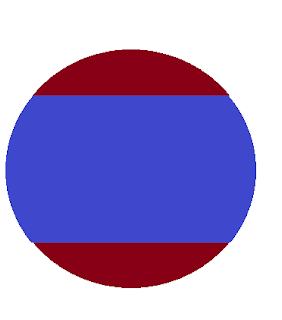 So consider this case where the tropics and mid latitudes are low albedo oceans and the upper latitudes are either reflective or absorptive, but the energy is not directly transferred into the oceans.  If the ocean extends from 45N to 45S, 70.7% of the energy can be absorbed versus only 50% if the oceans extend to the poles.  If the Ocean extended to 60N and 60S, because of the angle of incidence, more of the solar energy would be reflected as you approach 60 degrees. 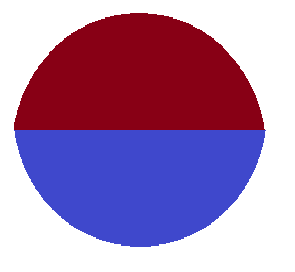 Consider this case where all of the oceans are below the equator and all of the land is above the equator.  The oceans would absorb less than half the energy in the first case even with roughly equal areas.  The lower portion of the blue ocean here, 60S to 90S would have high reflection due to incidence angle.  Assuming a uniform surface when there is not, would leads to error.

These are extreme examples, but Earth has ideally a 7:3 ocean land ratio.  In the first example because the extreme polar regions receive such a small amount of solar insulation, the effective ratio can be 4:1 with ice having roughly the same specific heat capacity as land.  With another orientation, the ratio could approach 1:1 if all the land is near the equator.  You have two extreme limits.

In HVAC, system components like fans can have  regions of instability.  With the same RPM and Total Static Pressure and fan can deliver 5000 or 7500 Cubic Feet per Minute of air flow.  Limiting the "system performance curve" to one or the other operating point simply requires limiting the airflow through the system at some stable static pressure.   If you don't, the system can operate at a stable RPM and CFM with the static pressure oscillating between the two extremes which has been known to destroy a few things.  So it is a good idea to know the limits before setting up the system/problem.

The current "pause" was completely missed by all the climate models because they share a common flaw, poorly defined limits.

Consider that the water vapor extends or expands the liquid water black body cavity.  Now the atmospheric water, ice and water vapor absorb a portion of the energy provided by both the sun and the surface.  The current ratio is approximately 2.2:1 ocean atmosphere for the solar energy absorption.  You now have a black body cavity containing a black body or a near perfect black body cavity, the liquid oceans and a less than perfect black body cavity with a porous "shell".   The total energy emitted from the porous shell is approximately 315Wm-2, the effective energy of water at its fresh water freezing point.  That means the total energy of the cavity has to be twice or 630 Wm-2.  If there is only 480Wm-2 entering the porous shell, then 150Wm-2 of energy must be provided by the inner more ideal black body cavity.  If you want to rotate the system just divide the energy by 2, but the inner black body still has to provide 150Wm-2 based on the peak absorption rate since the black body cavity stores energy until an equilibrium is reached then the atmospheric shell begins to form to maintain that energy.  If the oceans did not have the ability to change phase, there would be no clouds and atmospheric water vapor and the surface would be have an ideal emission of 340Wm-2 and a subsurface energy of 680 Wm-2, because the measured emission is always half of the total energy.

You can divide by two for rotation, but the percentage remains the same.


I don't expect the Minions of the Great and Power Carbon to understand that, after all it is their models that are screwing the pooch, but they love their pooch and will defend it forever despite its obvious flaws, but there may be some that find this more than just "word salad".
Posted by Unknown at 6:10 AM