The Tropical Oceans and Solar Forcing 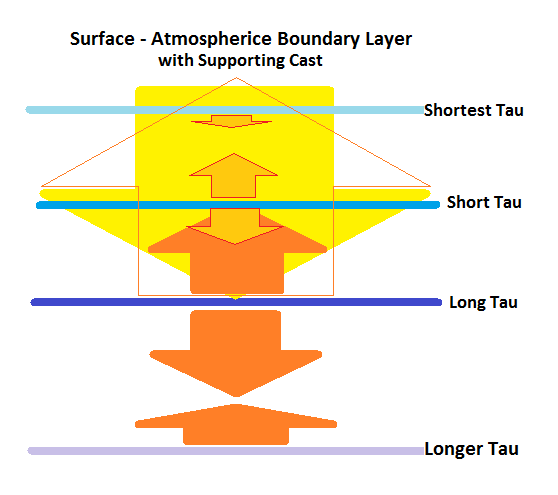 This is a basic sketch of the complex interactions near the tropical ocean surface.  Solar energy is absorbed in the Atmospheric Boundary Layer and the surface with some penetration to depth.  The ABL has a short time constant Tau, while the ocean surface has a longer time constant.  The ABL time constant after interaction with the surface was estimated to produce a roughly 9 month lag (Spencer et al.) and the upper ocean mixing layer a longer lag of approximately 8.5 years (Schwartz et al.).  The deeper ocean has variable lags on the order of decades to centuries.  Since there is considerable asymmetry, the combinations can become quite complicated.  In the tropics, volcanic and CO2 forcing have less impact with solar forcing and cloud response the stronger forcing. 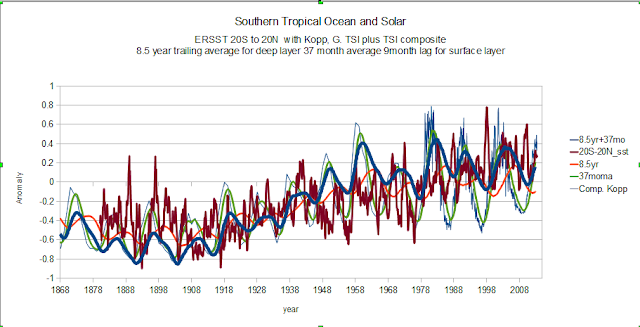 Using the G. Kopp TSI reconstruction available at SORCE spliced to the TSI satellite composite the Comp. Kopp series was constructed as shown and averaged into a 8.5 year trailing series to simulate the ocean mixing layer impact plus a 37 month centered average with 9 month lag to simulate the surface ABL interaction.  The 8.5 year and 37 month series where combined with 1 and 0.5 scaling factors respectively.  Alternating solar cycles are enhanced with this combination producing a Hale Cycle (~21 year) pulse that match the ERSSTv3b tropics (20s-20N) SST time series.

With enough degrees of freedom you can make about any fit you like, but this particular fits indicates that a "pause" in the tropical oceans may have started as early as 1980 had there not been volcanic noise.