Principa Scientifica and the Kiehl and Trenberth Screw Up

Principa Scientifica is the home of the Sky Dragons, the total deniers of radiant atmospheric effects, or almost anyway.  What stuck in their craw was the idea of Down Welling Longwave Radiation (DWLR).  That is not a bad thing, the concept of DWLR was pretty much confused and abused by the Kiehl and Trenberth Earth Energy Budget Cartoons.

First for the guys already calling me nuts, the early K&T budgets contained an error that impacted their estimation of DWLR.  The error of ~18Wm-2 was in atmospheric absorption in the Atmospheric window caused by their choice of "surface".  Water in the form of ice and droplets has a different radiant spectrum than water vapor.  That means most of the K&T error is associated with clouds which is still the largest uncertainty in the atmospheric system anyway.  In the newest of the Trenberth co-authored Earth Energy Budgets, that error was corrected and referred to as a "minor adjustment".  They admitted their error rather quietly, but they did admit their error.  They did not change their Cartoon though. 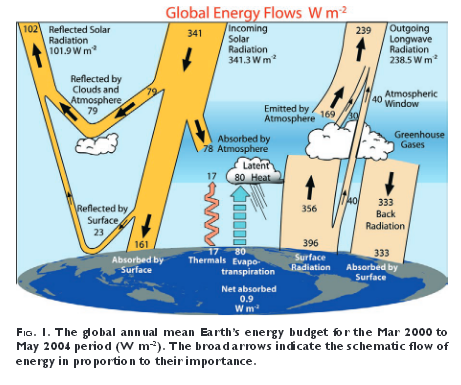 This is the cartoon from their most recent TFK 2009 paper.  You can see that the 40 Wm-2 from the "surface" appears to be passing through the clouds.  It doesn't pass through the clouds, it interacts with the clouds causing an approximately +/- 18 Wm-2 uncertainty in the surface of origin of the atmospheric window radiation.  The 0.9 Wm-2 net absorbed at the bottom should then be 0.9 +/- 18 Wm-2 which is a sizable margin of error.  If they are half as intelligent as they think they are they would know that.

Their, Trenberth, Fasullo and Kiehl, insistence on perpetuating the myth of confidence was noticed by several of their peers including Dr. Graeme Stephens who published a rebuttal Earth Energy Budget. 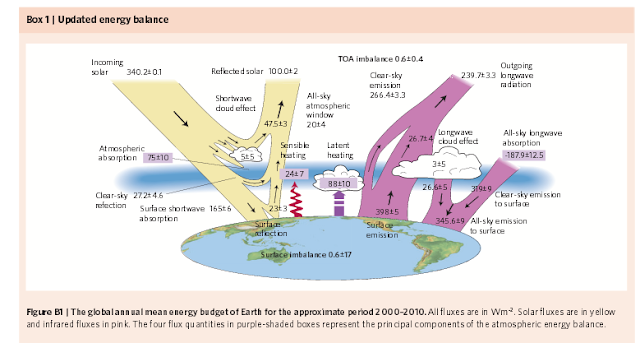 Since the Stephens et al. is a rebuttal, they used the same basic form used by TFK which still produces a misleading picture of what DWLR actually is supposed to be.

For example there is 26.6 +/-5 Wm-2 shown as DWLR from clouds.  There is ~75 Wm-2 of solar incoming energy absorbed by the atmosphere primarily by water/ice/water vapor.  That would have a net positive impact on the surface energy, technically being DWLR but not from an Out Going Longwave Radiation (OLR) source.  There would be OLR absorbed by the water/ice/water vapor as well which creates a bit of confusion. A better way would be to define the "surface" as the average cloud base so that DWLR has an actual meaning in physics.  Once latent and convective transfer are reduced enough that there can actually be radiant energy transfer isotropically, then you would have a meaningful DWLR value of approximately 220 Wm-2 +/- 20 Wm-2.

For some reason, the critics of the Sky Dragons don't bother to point out that Principa Scientifica papers challenging crap are by default crap and that they should first note that TFK are not a valid scientific references and just move on since the minions of climate science don't have the gonads to criticize their own crap, like the TFK pseudo-scientific nonsense.   That leaves the rest of the world stuck with two groups of idiots that can't get past square one in what should be a constructive scientific debate.

What both groups should realize is that Climate Science is a field in its infancy with a lot of obsolete references that need to be weeded out and replaced with better estimates with realistic degrees of uncertainty.

Principa Scientific could take that first step, but don't hold your breath.
Posted by Unknown at 6:00 AM