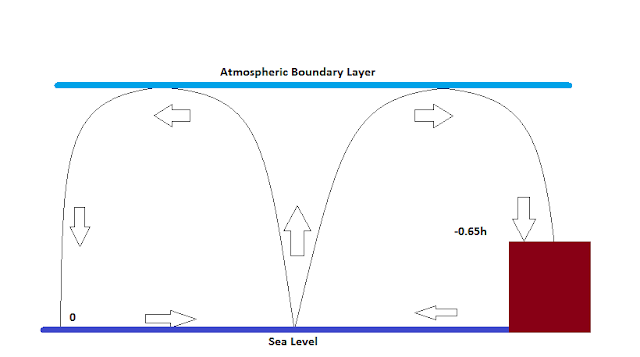 One of the smaller discrepancies in the Earth Energy Budgets is the sensible or "thermal" heat loss/gain where the K&T budgets have a lower 17 Wm-2 and the Stephens et al. budgets uses 24 Wm-2.  That is a large difference considering that anthropogenic forcing is estimated to be around 4 Wm-2 if you include all radiant impacts.  Thermals are an adiabatic process.  Air expands as it rises and compresses as it falls and by assuming that no energy is exchanged with the environment, the net impact is zero provided the starting and ending pressures are the same.  Using sea level as a reference, convection starting at sea level and returning to sea level would have zero net impact but convection starting at sea level and ending at some higher elevation would have a cooling impact, compression would not be able to complete an adiabatic cycle.  With the "average" environmental lapse rate at ~6.5C per kilometer, the air ending at a higher elevation would be about 0.65C cooler per 100 meters of elevation.

The average elevation of global land masses is about 680 meters above sea level.  Air rising from the oceans and ending on land would be ~4.4C cooler than that returning to sea level on average.  Land covers ~30% of the surface of the Earth, so if all evaporation took place over the oceans, the rain falling on land would be about the same temperature of the air carrying that moisture and ~30% would be cooler by ~4.4 C degrees if it fell on land.  Just as a rough estimate, 30% or 4.4 is 1.3 degrees gross cooling if averaged globally.

If the average temperature of the global ocean surface is 290C, the impact of precipitation on global "surface" temperature would be  an ~1.3 C reduction to 288.7 C degrees.  In terms of energy, the net global impact would be on the order of 7 Wm-2 for this crude illustration.  There is more to it than that of course.

Since water vapor makes things complicated, HVAC uses a number of rules of thumb to simplify estimated.  One is the sensible heat ratio or the sensible heat divided by the total heat loss/gain in a moist air process.  With an estimated SHR of 0.59 and a latent heat loss of 88 Wm-2, the total heat loss would be ~214 Wm-2 with sensible loss being 126 Wm-2.  In HVAC you are not generally concerned with what portion of that sensible heat loss is due to conduction, convection or radiant transfer, just that heat loss is not latent.  Using the same rough approximation of land area, 30% of the 126 Wm-2 of sensible would not return to the source, oceans, resulting in approximately 38 Wm-2 of net loss on a "Global" average from sea level.  The HVAC SHR rule of thumb is at a constant pressure so it does not include the compression loss.  Including both results in 45 Wm-2 total sensible heat loss from the oceans to the land.  If the average temperature at sea level is 290C which has an effective energy of 400 Wm-2, the effective energy of the land area would be 355Wm-2 or 45 Wm-2 less.  70% of the surface of the Earth at sea level would be ~17C and 30% of the Earth not at sea level would be ~8C degrees.  Global average surface temperature would be about 14.3 C degrees using the rough estimates of sea surface temperature (SST) from the pre satellite era, the HVAC rule of thumb with just a bit of correction for compression produces a reasonable rough estimate.  You can call it a gut or sanity check if you like.

All of hat sensible heat is not completely lost.  It is transferred to a higher elevation where eventually it can work its way back to sea level.  The longer the moisture associated with the sensible remains on the land masses, the more significant the sensible loss will be.  Snow, ice, ground water and lake reservoirs hold that energy in a lower state for a longer period of time making precipitation records and reconstructions a valuable tool for determine past climate conditions. Some though can be lost radiantly which the HVAC rule of thumb ignores.

There is a radiant rule of thumb though that is useful.  That sensible heat is transferred to a higher average elevation where the energy can be emitted in all directions.  Assuming that up/down is the most significant radiant impact, approximately half of the sensible heat loss would be "true" loss and not "reflected" back to the surface.  Half of the 45Wm-2 would be 22.5 Wm-2 which is very close to the sensible impact estimated by Stephens et al. in their version of the Earth Energy Budget and when you include their margin of error, +/- 7 Wm-2, the HVAC plus radiant rule of thumb contender, performed rather well as ballpark estimates.

The trillion dollar question is how accurately the sensible impact can actually be determined and the time scale required for returning to the mean.  Say hello to sea level.

This graph of sea level recorded at Key West is from the NOAA Sea Levels on-line site.  I picked Key West because it is close to me, it is a coral island reasonable well removed from areas of seismic activity and has a fairly long record for the US.  Since sea level change would be a proxy for precipitation retained on the land masses, it would be a reasonable proxy for both thermosteric impact, warming of the oceans and land mass sensible heat retention.  I doubt the two can be completely separated.  The graph indicates that sea level has risen by ~0.2 meters in the past century which is almost 8 inches in typical Redneck units.  There appears to have been more variation from 1925 to 1950 than from 1970 to present which would indicate that there is not much if any acceleration in sea level rise.  One would imagine if CO2 is causing everything, that there would be some signature, acceleration beginning ~1950 or sea level rise so we could all agree that CO2 done it and move on.  But it doesn't.

Instead we have what appears to be an underestimation of sensible heat loss by the old guard climate alarmists of ~8 Wm-2, roughly the average adiabatic compression difference between sea level and land elevation which is a natural variability consideration.  Where the rain falls depends on the atmospheric and ocean cycles that can have, based on the sea level at Key West, century long trends or better.

Now you should have a question about how I estimated the SHR.  By comparing the energy budget estimates with absolute temperature and humidity estimates.  It is not carved in stone, it is just an initial estimate and it most likely will vary with time and natural oscillations that vary the percentage of rain that falls on the elevated plains.  If you have a better one, whip it out.
Posted by Unknown at 5:09 AM