I have written a couple of posts on the problem of the Sky Dragons using outdated and error filled previous "peer reviewed" Earth Energy Budgets to disprove any at all "Greenhouse Effect".  When I mention the same issues to the "Carbon Tax will save the world" geniuses, aka the brain dead zombies, they make the same type of errors only in the reverse.

The Brain Dead Zombies demand detailed physical derivations or else they don't listen to any other view.  Climate Science is not at that point.  Climate Science is at the accounting and organization stage of its infancy.  Older work like Lean et al. pre 2000 and others that don't include the majority of the new "global" satellite information are antiquated.  Models and paleo reconstructions that end prior to 2000 are useless or worse, misleading.  You can't produce any reasonable first principles argument other than delta T = ?*ln(Cf/Ci) plus ?.  That is pretty poor first principles to base saving the world on.

The largest problem is natural variability. 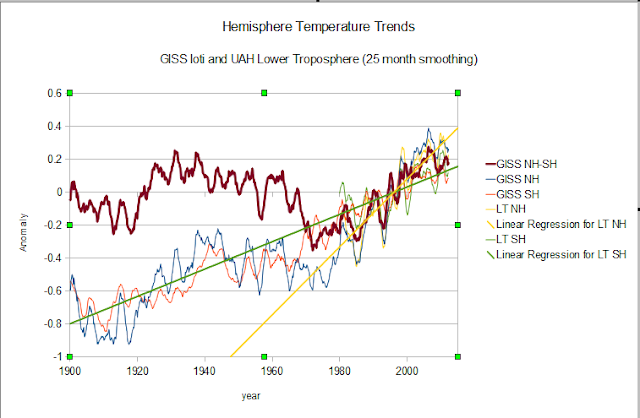 You can difference any of the "global" surface temperature data sets by hemisphere and show the range of short term, ~60 year, natural variability.  Peak to peak is roughly 0.4C and despite arguments to the contrary, the net impact is not 0.1 C plus or minus a touch.  Since most of the variability is in the land dominate northern hemisphere, atmospheric and "Greenhouse" effects amplify the shorter term natural variability impacts.  I include the UAH NH and SH with regressions to show the range of "uncertainty" that should be considered.  If you follow the NH regression you might notice that it resembles the OHC slope that is currently used instead of "surface" temperature since "surface" temperature is not playing nice with the global ambitions of the Brain Dead Zombies.

By picking a start date from the mid 1950s to early 1980s, the Brain Dead Zombies (BDZ) can produce the scary charts then mumble some nonsense about first principles and Occam's razor to baffle the lay public with bullshit.  Some of the more whacked out BDZs will even use the Best land only surface temperature data which is primarily NH because that is where the land is, mixed with idealized and unverifiable "physics" to "prove" we all should be wearing ashes and sack cloth for the next millennium.

In their latest effort to baffle, the BDZs promote the above graph from an unnamed source, i.e. they didn't provide proper accreditation other than the pnas.org in the link.  The graph ends in approximately 1998 cutting off the past 15 years of climate "pause"  knowing that their Brain Dead dihydrogen monoxide banning minions can't figure out what year it is anyway.  Adding the "pause" year, the peak to peak range would be approximately 0.8C with likely another 15years, thirty years total, of "pause" conveniently trimmed from their Carbon Tax sales pitch.  The chart appears to be one created by Tsonis et al where the instrumental record is the dark solid line, the instrumental with estimated natural variability removed is the dashed line and an exponential fit is applied, the thin solid line.  For some odd reason the BDZ think this is proof of some nonsense or the other.

This chart borrowed for Steve McIntyre's post on the Guy Callandar's simple climate model covers the same period up to present with the grren line being the Callandar model which has a "sensitivity" of approximate 1.6 C degrees, the lowest range of IPCC "projections".  Neither the Tsonis nor Callandar models consider that the start, ~1900, might have been below "average" due to the presistence of little ice age conditions.  Depending on what "average" is, the percentage of warming due to CO2 equivalent anthropogenic forcings would vary. 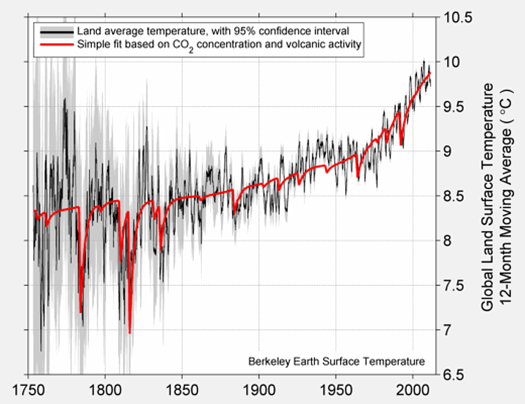 The Berkeley Earth Surface Temperature (Best) project also has a fit of estimated volcanic and human forcing on climated compared to their land only temperature product.  Since the average start temperature is approximately 8.25 C and the end point in 2012 is approximately 9.8C, you can use the Stefan-Boltzmann law to determine that the approximate change in "forcing" 7.9Wm-2 for 1.55C change or a "sensitivity" of 0.196C/Wm-2 but there is a lot more negative volcanic forcing prior to 1900 than after. 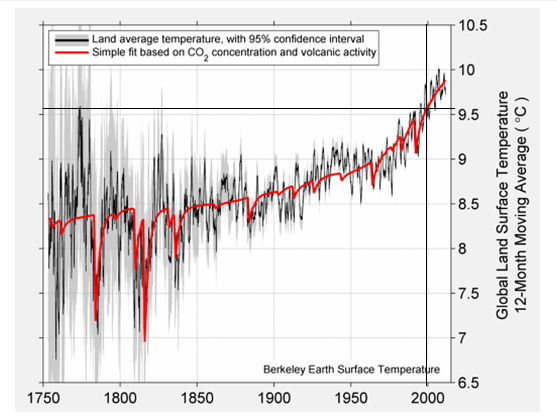 If you consider the peak temperature prior to the major volcanic forcing only ~0.5 degrees of the rise might be due to "industrial" forcing with the remaining ~1C due to recovery.  If you completely ignore the possibility that a significant portion of the warming is due to natural recovery, you get a high "sensitivity" and if you consider that 1900 started near the little ice age minimum ~0.9 C cooler than "normal", you get a lower CO2 equivalent "sensitivity. 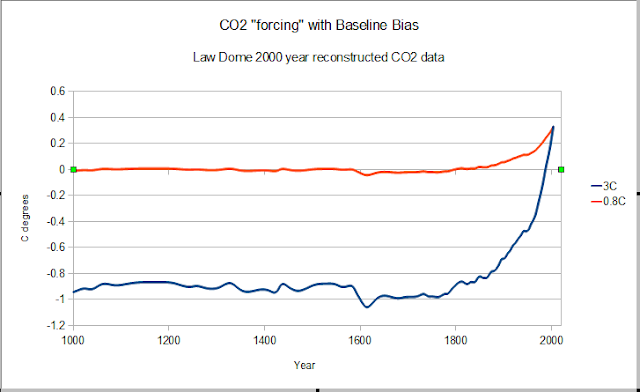 Like this.  Using the Law Dome 2000 year reconstructed CO2 data I show the extremes.  The blue is 3.0C per doubling of CO2 and the red is 0.8 C per doubling of CO2, but the atmosphere responds to energy change at the surface even if there is no change in atmospheric composition.  0.196C/Wm-2 would result in ~0.8C for 4Wm-2 of CO2 equivalent forcing.  So you have two choices.  Thermogeddon, because nothing existed prior to James Hansen or most to the warming/cooling from 1750 to present was natural or at least not CO2 equivalent forcing related. 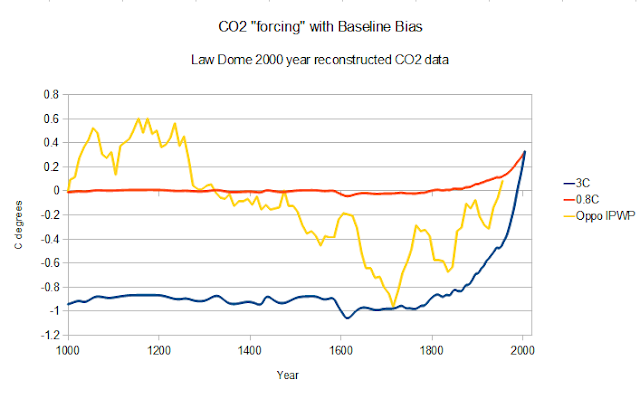 This chart includes the Oppo et al 2009 Indo-Pacific Warm Pool SST reconstruction using the entire 2000 years as the anomaly baseline.  Which "sensitivity" do you think is a better fit with reality?

The Brain Dead Zombies avoid pre-industrial cooling like the plague.  If you mention what should be a simple observation they will switch topics to peak oil, Big Oil or just scream "At 35C all die!!", because what else would you expect from a brain dead zombie.  At least the Sky Dragons try to stay on topic.


Update: Since the issue is if CO2 is the majority share holder in climate change I decided to add this chart. 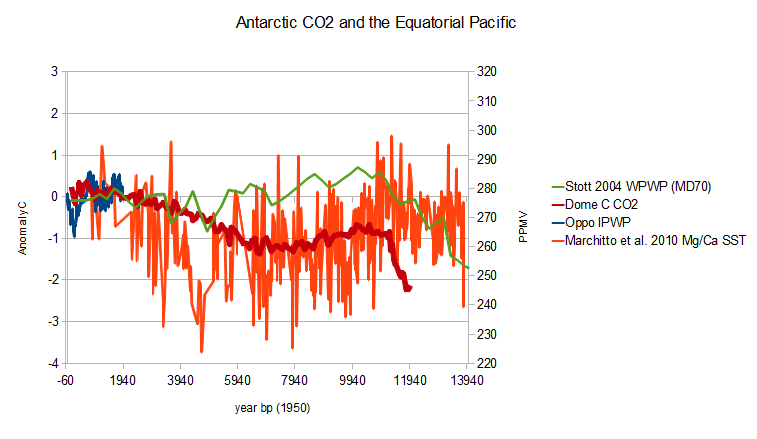 The Marchitto et al 2010 data and spreadsheet was downloaded from NOAA Paleo and the paywalled paper, Dynamical Responses of the Tropical Pacific Ocean to Solar Forcing during the Holocene (DOI: 10.1126/science.1194887)  published in Science Magazine is available in the embedded link.  From the abstract:

Stott et al. 2004 is also available at the NOAA Paleo site and a free view pdf version of the article published in Nature magazine available here.

From the conclusions: Cariaco Basin sediments also contain evidence of higher rainfall in northern South America during the early Holocene, with increasingly arid conditions developing during the past 5,000 yr (ref. 18). These data all point to tropic-wide changes in the hydrological cycle that have been attributed to a more northerly position of the ITCZ during the early Holocene in response to changes in solar radiation associated with the precessional cycle. Data from other parts of the Pacific and Atlantic will now be required for an assessment of whether the changes in the hydrologic cycle affected the salinity gradient between the Pacific and Atlantic Oceans. If so, millennial to centennial scale changes in Holocene ocean thermohaline circulation would be directly affected by ocean–atmosphere processes that have occurred in the tropics
Posted by Unknown at 11:47 AM