While everyone waits impatiently like kids on Christmas Eve for the Fifth Assessment Report on Climate Change and/or Carbon Pollution, the lack of Global Warming for the past few years has created a bit of a situation for the members of the Intergovernmetal Panel on Climate Change (IPCC).  The problem is that every since Al Gore got involved, climate hasn't done that much changing.  Temperatures peaked for the most part in 1998 when Al Gore Symbolically sign the Kyoto Protocol.  Since that symbolic signing, the United States has been one of the few nations to symbolically meet the Kyoto emissions limits.  You could say that Former Vice President of the United States symbolically tamed climate all by himself proving that the pen is more powerful than the United Nations. 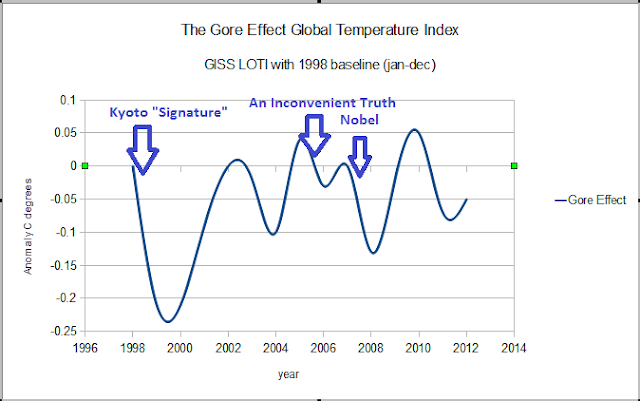 Saves a lot of work downloading all sorts of data, all you need is GISTEMP from 1998.  You don't have to worry about all those "adjustments" and paleo stuff, because the Gore Effect is the strongest climate forcing known to man.  Al Gore has saved the world just by picking up a pen, symbolically of course.
Posted by Unknown at 4:30 PM