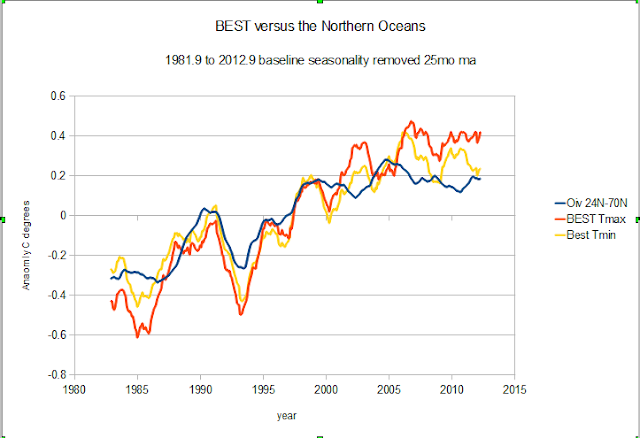 The Berkeley Earth Surface Temperature (BEST) project has updated and is still updating its site.  A discussion of the pluses and minuses of the revised products is going on at Climate Etc. among other places and has finally brought to the forefront the issue of Land Amplification.  The minions of the Great and Powerful Carbon tend to miss the subtle issues of a mainly land located in the northern hemisphere, "Global" temperature series and what drives the temperatures of the majority of the land in that land only data set, the northern oceans.  So in yet another soon to fail attempt I have plotted the Reynolds Oiv2 SST for the Northern Extra Tropical oceans from 24N to 70N latitude.  This time though I thought showing the BEST Tmax and Tmin instead of Tave might be better.

Since the Oiv2 data only starts in November of 1981 and has seasonal variation that needs to be removed to see the ~0.4 C shift starting in 1985 thanks to volcanic forcing plus a Pacific Decadal Oscillation (PDO) mode swing, I used the monthly averages for the 31 full years common to the data sets for the baseline and seasonal cycle removal.  That should be pretty clear to anyone that halfway follows the surface temperature debate.  BEST, being predominately northern hemisphere data has a strong northern hemisphere seasonal cycle.  While my approach may be less than ideal, at least there are 31 years and I explained what I did. 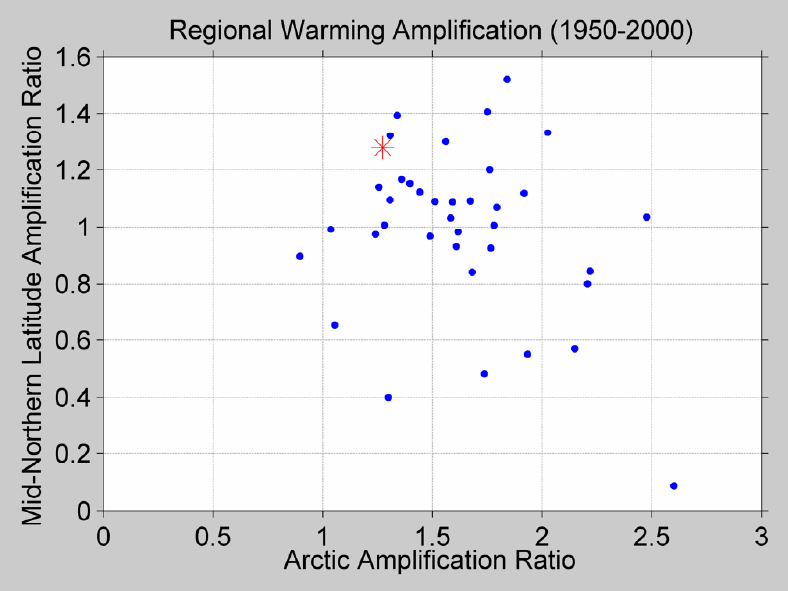 BEST has become the last great hope for the alarmingly high "sensitivity" that the minions of the Great and Powerful Carbon need to sell their Fear Overconfidence and Confusion which requires drastic extraordinary measures to save mankind from ourselves as only they are capable of doing.

While we are at it let's consider some baseline dependence issues. 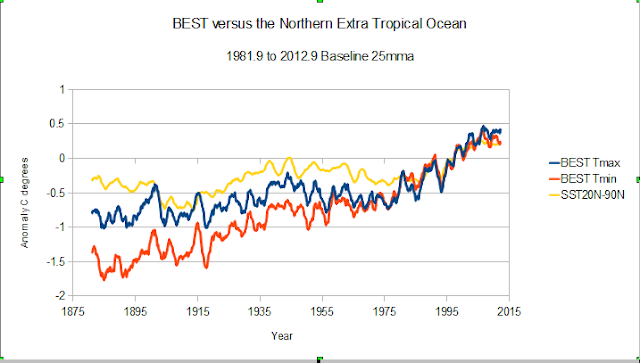 Since roughly 1990 the instrumentation for the surface stations have been various digital sensors.  The sensors required a good deal of adjustment to produce reliable data.  Unlike analog, liquid in glass, the digital instruments can tend to have a bias, typically on the warm side.  There is no reason to believe that the adjustments didn't correct things, but the adjustments impacted at an inopportune time.  Since the surface and satellite instrumental generally agree, a modern era baseline should be as good if not better than an arbitrary baseline.  The plot above use the same baseline as the first graphic with the NOAA ERSSTv3 20N 90N data that is readily available at this site.  This time seasonality was not removed which may be a minor issue.

With this baseline, the BEST Tmin starts at the lowest initial condition with Tmax more closely tracking the northern extra tropical SST.  The "Global" diurnal temperature trend would have decreased until circa 1980 then started increasing roughly around 1985.  The majority of the warming was due to Tmin and from the start of the data until about 1960 then more uniform warming took place.  Just a different view of the same old data.
Posted by Unknown at 6:23 PM