The Madness of Reductionist Methods 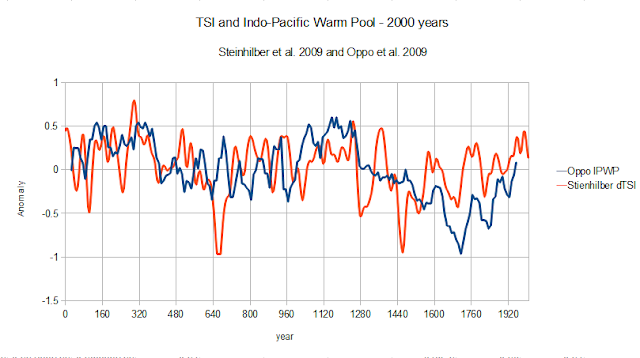 This is a comparison of the Steinhilber et al 2009 Holocene TSI reconstruction with the Oppo et al. 2009 Indo-Pacific Warm Pool temperature reconstruction.  While there is a correlation just eyeballing, there are lots of exceptions that would need to be explained by "other" stuff or lags, so it is not a pretty correlation required by reductionists. 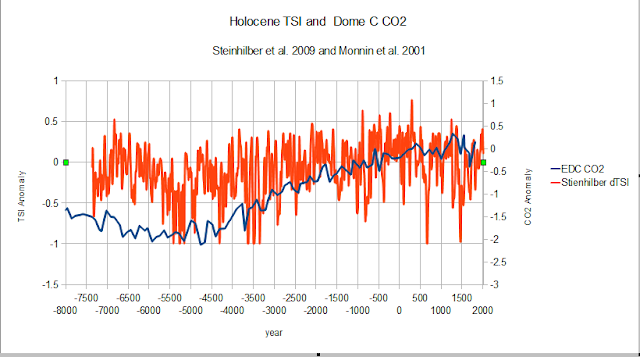 Comparing the TSI recosntruction to the Holocene portion of the Monnin et al 2001 Antarctic Dome C CO2 reconstruction, there is also a less than ideal eyeball correlation.  The same explanations for "other"and lags would be required, but CO2 started rising around 7000 years ago and the reconstructed Total Solar Insolation near the same period.

Because the reductionist models do not allow for longer term impacts due to cumulative heat transfer between various complex ocean layers with variable inertia, solar of course cannot have a significant impact but diffusion into and out of simple slab models can be used to "explain" hitches in the reductionist model correlations.

You could call this blinded by the Enlightenment.  The 10Be isotope used to construct the Holocene TSI is collected at the true surface of the Earth, in the Steinhilber et al. case, the Greenland Glacier and the CO2 reconstruction of CO2 at the Antarctic ice cap.  The general correlation would be indicative of "Global" forcing and the exceptions, internal variability between the poles.  There is no simple reductionist "fit" because the systems, Earth and the Solar system plus Earth - Atmosphere and Oceans have their on response times and "Sensitivities".  So this solar precessional cycle impact that could include actual Top of the Atmosphere TSI, TSI incidence angle, Atmospheric and Ocean tidal forces, Volcanic forcing, Ocean heat transport delays as well as atmospheric forcings, provides enough degrees of freedom to paint any picture of past climate one wishes.

The reductionists are convinced their way is best even though their model of Earth climate requires constant "adjustment" to appear to be useful.  Like a bulldog they cling to an "elegant" theory and ignore the growing number of paradoxes created by that theory.

To explain away the Solar CO2 relationship for the past 7000 years they only have to select enough noisy proxies to average away any solar signal.  Instead of looking for the more difficult to answer correlations, they just avoid them.
Posted by Unknown at 7:29 AM