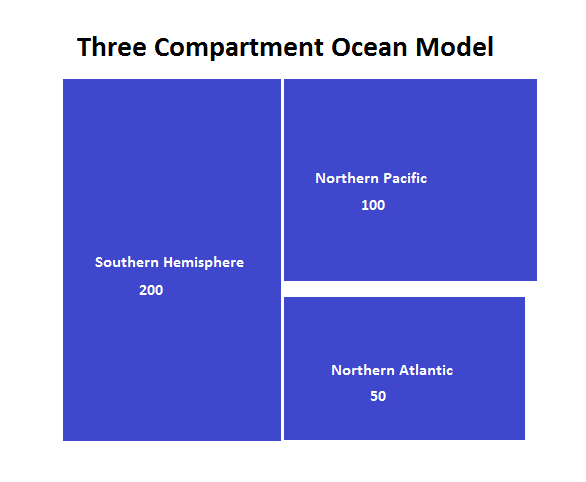 Long term settling times that can appear to be oscillations or weakly damped decay curves just drive the Climate Science minions nuts.  After being spoon fed the milquetoast basics with simplistic control theory they just can't grasp how a system can be stable but swing around on different time scales.  I ran into this situation way back in the 1980s with a first for us HVAC monitoring system with a brand new just released D to A converter on a S100 bus board which we hooked up to a 30 pound Compaq lug-able with the red plasma screen.  Woo Hoo, we were cooking with high tech gas!  The "Project Manager" skimped on the laser trimmed resistors and installed 1% Radio Shack "precision" resistors to set the range for the 4 to 20 milliamp pressure and temperature transducers which I was to install.  One of the pressure transducers was for the discharge static pressure in constant volume central AC system which would never vary much.  After explaining how the "precision" resistors truncated the range of the 4-20 milliamp sensors requiring software calibration, we started our data logging project.  The system worked fine and maintained temperature and humidity within tolerances, but the "project manager" got completely wrapped up in the discharge static pressure data.  It was all over the place he thought.  Nope, it was just noise once I got him to adjust the range.  The system pressure was 0.75 inwc and varied by 0.025 inwc in time with the fan RPM.  That 0.025 inwc variation bugged the hell out of him though.

This brings me to a two compartment model by Steven Schwatrz with the Brookhaven National Laboratory.  Dr. Schwartz use a simple RC two compartment model with the atmosphere/ocean mixing layer as the smaller compartment and the bulk of the oceans the second compartment.  The way he divided the specific heat capacities he ended up with a roughly 8 year time constant for the atmosphere/ocean mixing layer and a roughly 500 year settling time for the bulk of the oceans.  The object was to determine climate "sensitivity" and based on his rough model he came up with a ballpark of around 2C per doubling.  Nice simple approach, nice solid results, nice simple model.  The ~8 year time constant would be the equivalent of the noisy discharge static in terms of actual energy.  The bulk of the Oceans would have about 800 times the capacity of the atmosphere/ocean mixing layer compartment.

In the Sketch above, I have a three compartment model for the bulk of the oceans.  I am not concerned with the noise, just the energy.  Since the southern oceans can more easily exchange energy, their time constant would be close to the 500 years that Dr. Schwartz figured.  The northern hemisphere oceans cannot exchange energy as well with each other and thanks to the Coriolis effect, can't exchange energy that well with the southern oceans.  As a rough estimate, the time constant for the northern Atlantic would be about 125 years and the time constant for the northern Pacific about 250 years based on just area and common equatorial forcing.  With the northern Atlantic "charging" first, it would be the first to start a discharge by what ever convenient path it can find with a "likely" harmonic of tau(Atlantic)/2 or 62.5 years.  The northern Pacific would "likely" have a 125 year harmonic and the southern hemisphere a 250 year harmonic.  The noisiest signal would likely be the north Atlantic 62.5 year "oscillation".  It doesn't matter what external forcing is applied, with unequal areas and limited heat transfer paths there will be some "oscillations" around these frequencies and the magnitude of the oscillations would be dependent on the imbalance between compartments.  Most of the world land mass drains into the Atlantic, that energy varies with season and precipitation/ice melt, there will be constant thermal "noise".

Not that complex.  Look at the big picture not the noise.