The great thing about Thermodynamics is you can change your frame of reference.  From the correct reference, you get useful answers which can be transferred to another frame to learn more about the system and also check your work.  You can get some really screwy answers if you pick the wrong reference.  Since climate science started with less than stellar references, a top of the atmosphere with is actually the middle of the atmosphere, a surface that is actually a kilometer or two above the real surface and use averages of air temperatures a couple meters above the surface for land and about 10 meters below the surface for the oceans, there are all sorts of opportunities for climate scientists to really end up looking like dumbasses. 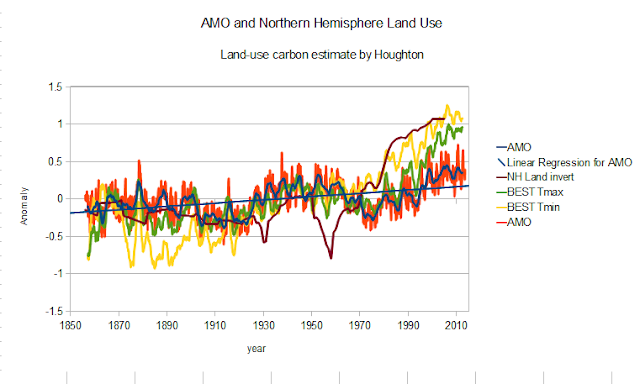 Just for fun I thought I would compare the BEST "Global" land "surface" temperature average with the Atlantic Multi-decadal Oscillation and the Houghton NH land use "carbon" estimates, INVERTED.  Why inverted?  Well a little back ground first.

The Houghton land use carbon study is an estimate, nothing wrong with that, but the depth of the estimated soil carbon loss is rather shallow.  Along with losing soil carbon, land use tends to increase soil moisture loss, erosion and soil average temperature by a degree or two.  Since Carbon is the focus of every thing climate related, the land use carbon estimate is nearly useless as a land use carbon estimate.  It can be off by nearly 100% in some areas where deep rooted plants where the norm like Steppe, I thought I would look for a relationship of any kind.

Land use is consider a negative forcing.  The climate scientists are certain that cutting down trees to create pasture for goats to over graze is good for the "climate".  Never mind the occasion screw up that causes a dust bowl here and there or a fresh water sea to become a salt flat, land use cools the environment.  Wet land cause warming with all that water vapor feed back so they are not good for climate either.  Minions of the Great and Powerful Carbon look to the land that is warming, but should be cooling, because of all that land use change, to show just how bad things are becoming because mankind is addicted to Carbon.

Since the Atmospheric Boundary Layer (ABL) is the real greenhouse, what cools the true surface warms the ABL which is fixed to roughly 0 C provided there is water vapor.  No water vapor then the physics change.  You get less deep convection without water vapor and the lapse rate increases.

I have mentioned for a while that the impact of land use looked completely screwy, but have been constantly reassured that the sign is correct.  Never mind intense farming in high plains tends to be stressful on the soil as evidenced by the US dust bowl and the USSR version in the 1960s, land use cools the "Global" land.

Inverting the Houghton land use carbon data seems to produce an unusual correlation with the most recent three decades of "Carbon Pollution".  Of course the data is not suited for the purpose I used it for and obviously further study is required, the climate science code for SEND MO MONEY!

But I thought some might get a chuckle out of the possibility that climate scientists have screwed up yet again because of their fanatical Carbon done it bias.
Posted by Unknown at 5:19 PM