It is Greenhouses all the way Down

While the total energy absorbed in the ABL by all sources is large, the net energy, what really matters, averages about 88Wm-2 or about the amount of the 24 hour average of the latent energy transferred from the actual surface, the floor of the ABL greenhouse to the roof of the greenhouse the ABL capping layer.  You should noticed that I have divided the net energy of the ABL into 39 up and 39 down with a question mark in the middle.  That question mark is about 20 Wm-2 or about the range of estimates for the total latent energy transferred to the atmosphere, 78Wm-2 to 98 Wm-2.  That is how well we understand our atmosphere. 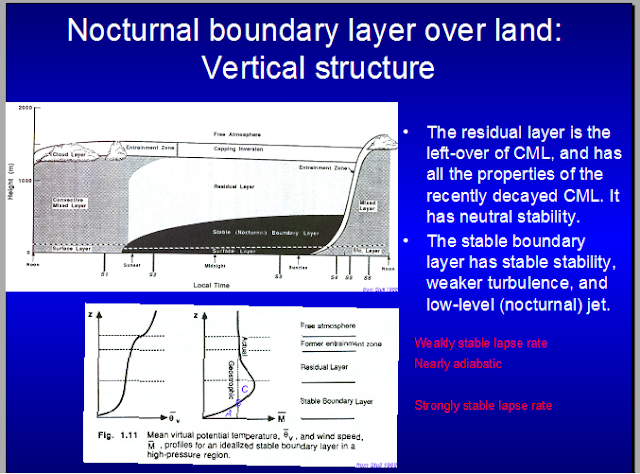 This graphic, borrowed from an Ohio State University server which unfortunately doesn't have a good attribution, the author remains nameless so far, though he does thank Nolan Atkins, Chris Bretherton and Robin Hogan in the at least three versions that pop up while Googling atmospheric boundary layer inversion capping, has a neat graphic that I plan to critique in an educational way.  "The Stable boundary layer has stable stability" is something that might be better worded, but makes a fair tongue twister.  There, critique over.  I need to be careful because the course is on lightning, I don't want sparks flying because of my questionable use of intellectual property.

The power point presentation that this graphic was lifted from looks like it has good potential to simplify explanation of the complex processes that take place in the ABL convective mixing layer, so I hope the author fine tunes and publishes since most of the other discussions I have seen are dry as all hell.

The  gist of the graphic for my use right now is the transition from an entrainment to inversion capping layer.  During the day mode, moist air rises with convection mixing the layer between surface and capping layers.  As the moisture begins to condense, buoyancy decreases at a stable capping surface where further cooling, mainly radiant, increases the air density which lead to subsistence or sinking air mass that replace the mass that convected from the surface.  As night falls, the thermal energy driving the convective mixing decreases leaving an inversion layer that produces the true surface greenhouse effect.  For those less than radiantly inclined, the temperature of the roof is greater than air above and below producing a higher than "normal" sink temperature for the greenhouse floor source.  The ABL "roof" gets most of its energy from solar, the 150 and floor latent and sensible energy the 224 in the first drawing.

The reason I have "Day" values for the solar powered portion is because the ABL can only contain so much energy.  The ABL expands upward and outward increasing the effective surface area allowing greater heat loss to the "space"/atmosphere above the ABL capping layer.  That expansion can be towering deep convective deep in summer or just clear skies with a little haze, but the ABL "envelop" expands in the day and contracts at night producing what is known as a residual layer between the entrainment layer and the stable nocturnal layer.  If there is advective or horizontal winds below the capping layer, the impact changes.  A sea breeze is a good example that tends to cool sometimes and warm others, lake effect another and then you can have massive fronts move through which can destroy the ABL stability layers all together.  Considering all those possibilities is a challenge, so let's stick with a static version so heads don't explode.