About the least understood factor in climate change is the big yellow bus that carries all the players to the game.  If you look at a simplified energy budget you see just two layers a surface and an atmosphere.  That average energy absorbed by the atmosphere is about 150 Wm-2 and the surface is about 330 Wm-2.  Instead of those values, the Energy budgets use 75 Wm-2 for the atmosphere and 165 Wm-2 for the surface.  That assumes just as much energy is lost as is gained, but it doesn't describe how the system got to that point.  So the diagram about takes a little different look at ol' Sol.

Each of the four simplified layers interacts with the other layers.  If you add CO2 or other stuff to the atmosphere, it will change the interactions with delay, increasing the time constant Tau, being the one most discussed.  There are four time constants in this simple illustration and changing one impacts the others.  The estimated change per doubling CO2 is about 4Wm-2 which puts it in the "other" energy category.  The object of the diagram is to show that ol' Sol has impact going in and going out.  CO2 just changes the rate of going out.  If more energy is absorbed in the upper free atmosphere, ol' Sol may provide more energy to the upper free atmosphere.  Any change in the heat capacity of the atmospheric layers may change in the distribution of the energy provided by ol' Sol to all of the layers.

To add to the fun, ol' Sol tends to change a bit more than was once suspected.  The 30 Wm-2 in the deep oceans and the 20 Wm-2 in the upper free atmosphere are provided by UV and visible light with just a dash of near infrared.  If the upper free atmosphere absorbs more, the deep oceans would receive less and vice versa.  Since Solar impacts in both directions, that change can have twice the impact on either or both of the middle layers.  The deep ocean with its huge heat capacity doesn't care how long it takes, but will slowly adjust to whatever the situation in order to restore its preferred balance with the surface.

This brings us back to those poorly understood Solar variations.  If you estimate just Total Solar Insolation (TSI), the change is not enough to worry about.  However, if you consider the change in Solar spectrum irradiance and the impact on the upper and lower layers, there is about 4 times the impact.  Just compare the Lean 2000 TSI reconstruction, 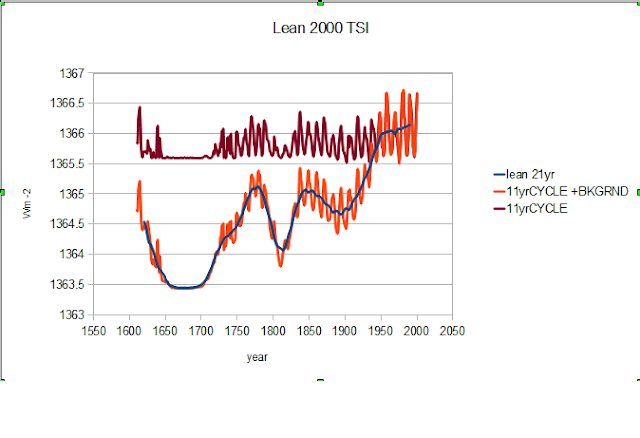 That is a big difference between what actually happens at the surface versus what is happening at the top of the atmosphere.

Which explains why that tiny little TOA solar variation of only 0.1% can impact the ENSO region as shown in this chart. 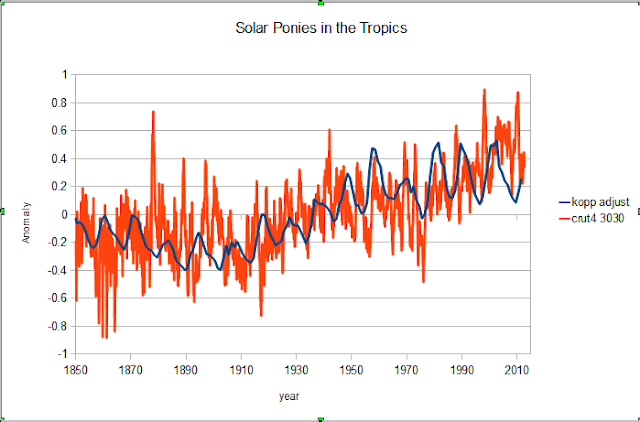