A Tale of Two Greenhouses

There is a new post a Dr. Curry's Climate Etc.  Stratospheric Uncertainty which relates to my Weird Science post.  There is uncertainty in the models due to the Stratosphere not responding to  the addition of CO2 as projected in theory or reproduced in the models.  Above is the simple thermodynamic reference layers drawing used in a few of my past posts.  Above the red arrows there are colored layers with decreasing values.  Below the red arrows there is one layer with a lower value.  Had I wished to be more complete, below the red arrow, there would also be colored layers with decreasing values.  Heat is applied roughly on the red layer and flows through the other layers.  If you wish to solve the Energy Budget, you can pick any layer you wish and call that a surface.  Some layers provide more information than others though.

Since I am a bottom up kinda guy, I picked the bottom layers.  The deep blue sea has a deep blue layer with an effective average energy of 334 units.  I use Wm-2 for Watts per meter squared but I could use Tda for Therms dumbass as long as I am consistent.  With two layers I can determine a difference, ratio or some relationship that, as long as I am consistent, will describe the system.

Climate scientists are top down kinda guys.  They selected the 240 layer.  Now instead of using the 316 or 500 layers, they selected ~ 390 +/- 20 or so as their second layer.  To double check they also selected a third layer of 200 +/- 20 or so, what they call the Top of the Atmosphere (TOA).  The reason the TOA they chose is not 240 is because the radiant energy that they are obsessed with has a "window" that they figured passed ~ 40 units without interacting with the atmosphere.  They did this because being top down kinda guys and having studied distant planets they had noticed that the energy in the "TOA" and the energy out of the "TOA" was roughly equal.  To them, "TOA" was the obvious choice for a "Frame of Reference".  To the climate scientists, it was amazing, a paradox even, that the surface of a planet could be warmer than the "TOA" energy indicated.

Being an Earth bound less than scientific Redneck, I normally use temperature and enthalpy to determine heat flows in fluids.  Also because I am a less than scientific Redneck I consider "Fluids" to be  more liquid than gases.  Technically both are fluids.  But since the climate scientists define the problem and likely are the problem, I have changed my Redneck ways somewhat, in the hopes they will notice the obvious.  Below the red arrows is one "greenhouse effect"  in a more viscous "fluid" and above the red arrows is another "greenhouse effect" in a much less viscous "fluid".  This is a tale of two greenhouses.

Since the vast majority of the energy retained in the Earth "greenhouses" is in the deep blue sea, my 500 minus 334 equals 166 units is a much more stable thermodynamic reference than their +/- 20 or so layers that are constantly changing.  Since the Telescope Jockeys are partial to radiant energy units Wm-2 in the air and cumulative energy units of Joules in the oceans they will never appreciate the simplicity of using effective radiant energy, 334 Wm-2 for the deep blue seas instead of ~10^22 joules per year increase in ocean heat uptake which is roughly equal to 334.05 Wm-2 or about 0.09 degrees change every 50 years or so. 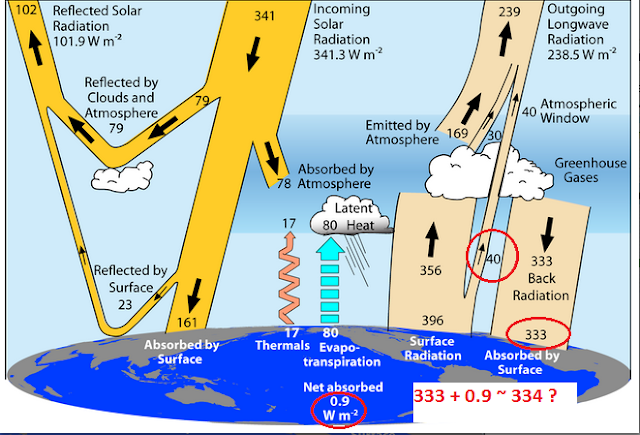 So this is what the "greenhouse effect" looks like to the Telescope Jockeys.  The circled 333, 0.9 and 40 are somewhat controversial.  Mainly because the selected "frame of reference" TOA is not showed in a way that makes any sense. 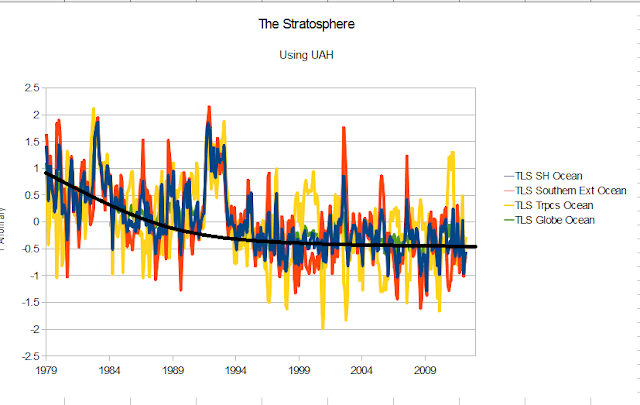 Enter the Stratosphere, the thermodynamic layer that is above the "TOA" and is being obstinate currently for the models.  In theory the Stratosphere should continue cooling while the "surface" warms due to the addition of "greenhouse" gases.  The Telescope Jockey's are puzzled. 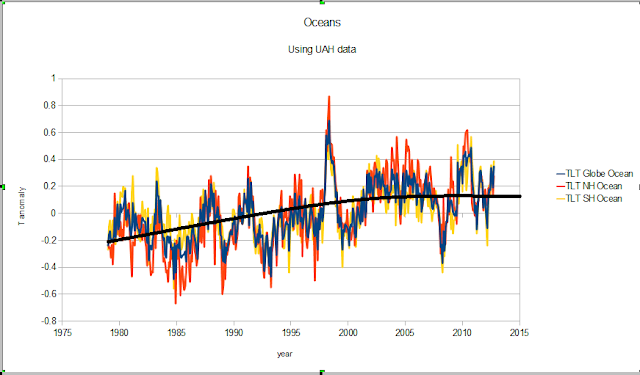 Rednecks on the other hand are not so puzzled.  In the midst of all the chaotic changes, the deep blue sea frame of reference slowly does its thing.

What is most interesting is that in Thermodynamics 101, they teach the real laws of thermodynamics, KISS, ASSUME and FOR, Keep It Simple Stupid, Assumptions can make an ASS of U and ME and Frame Of Reference.  So the Telescope Jockeys are puzzled over the Stratosphere not following the "projections" of their models and the skeptics remain puzzled over the meaning of the 334 in the cartoons.  It is a tale of two greenhouses, a classic story of confusion and intrigue, unfortunately without enough KISSing.
Posted by Unknown at 7:51 AM