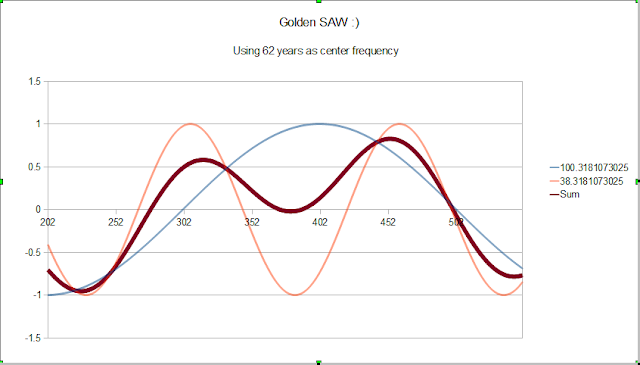 Dr. Vaughan Pratt's Climate to within a Millikelvin AGU poster is creating a little buzz.  It is a curving fitting exercise that matches the now antiquated HADCRU3 global average surface temperature data to well, within a millikelvin.  He post a spreadsheet version of his calculations for interested parties to checkout.  The Excel version has some macros that OpenOffice really doesn't like at all.  So I haven't had the chance to play with it I don't have and probably won't spring for a full version of Excel.

I mentioned in passing Selvam's fascination with the Golden Ratio(GR), (1+5^.5)/2, and above I have plotted the sum of two sine waves based on the GR.  The 100+ is 62 times GR and the 38+ is 62 divided by GR.  I "cherry picked" a portion that looks some what like Dr. Pratt's SAW signal he sums with his expected CO2 forcing curve.

Mike Jonas is not particularly impressed with Dr. Pratt's work and has posted a rebuttal on Wattsupwiththat, Circular Logic not worth an Millikelvin.  The sawtooths sawteeth(?) chart above is borrowed from his post.  The period ratio of the two SAWs 1.5:1 means that the pattern will repeat in another cycle or so, which means that Dr. Pratt's fit will disintegrate rather quickly.  That is not really a problem since the curve fitting exercise just proves that with enough degrees of freedom you can draw anything you like.  His spread sheet filter routine is pretty trick, so I may borrow that sometime. 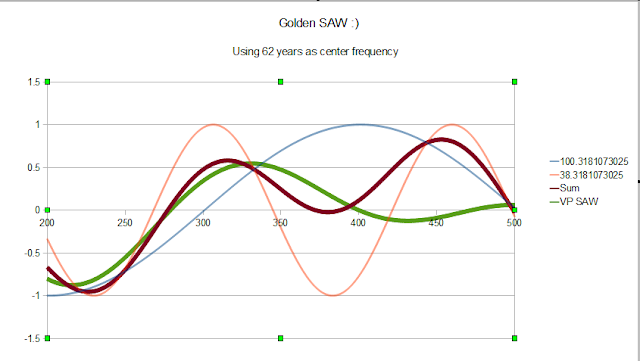 Without bothering to scale, this chart compares the Golden Ratio SAW with Dr. Pratt's SAW.  Since he starts with the assumption that CO2 forcing is within the middle of the IPCC "range of comfort", his SAW decays quickly to let CO2 do its thing.  In my case, the GR curve has a little extra umph at the end.

This does really amount to much, but I did find it interesting that an "off the rack" GR ratio sine wave comes as close as it did.

I haven't sprung for the bucks to read this, Orbital Forcing and Endogenous Nonlinearity in the Pleistocene: The Greenland Ice Core, paper, but is does in the abstract mention that there are some fun sub-harmonics in the paleo data.  Who knows, Selvam's golden ratio may be very popular in climate.
Posted by Unknown at 11:17 AM