The atmosphere is being impacted by more CO2 and more energy can be retained at the surface because of that.  The oceans are the big "retainer" and respond to the "surface".  Does the ocean and atmosphere share the same sensitivity to forcing?  In the Tale of Two Greenhouses, I point out that I don't think so.

In the post, What is the Gain?, I explore the noise that could be in the data we use to determine the "sensitivity".  Because of the work of A. M. Selvam, Self-organized Criticality - a Signature of Quantumlike Chaos in Atmospheric Flows, I put together a little "what if" spreadsheet.  Since the SOC would tend to create self similar repetative patterns on all scales, the Atmosphere and the Ocean flows should exhibit similar quantumlike chaos, with slight differences.  The ocean have a hard limit, freezing which should impact their response to atmospheric changes.  Pretty simple, the time scales would be different since the fluids are different.

The impact of CO2 in the atmosphere is at the Effective Radiant Layer(ERL).  What temperature, energy and shape that ERL has is not well known.  Because of the lower density and greater allowable distances, the chaotic patterns in the atmosphere are much greater than the oceans on shorter times scales.  With all that chaotic flow, pin pointing anything to use as a reference is difficult.

Using powers of Phi, the Golden Ratio as a subtitute for distance, I made a table of energy levels that would "fit" the Selvam concept as I understand the concept.

Now assuming that 4.1Wm-2 is the doubling forcing for CO2 and ~190Wm-2 is the value of the ERL, that spread sheet produces this table. 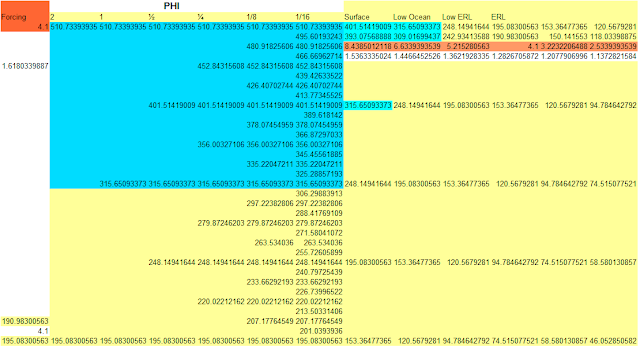 In the white row under under "surface" the 1.536 would be the "sensitivity" to a doubling of CO2 if that produce 4.1Wm-2 of additional "forcing".  If you look to the left and up, the tropical "surface" forcing would increase by 10.7 Wm-2.  We know that does not happen quickly, and if that should happen, then there would be a large increase in evaporation, the feedback that would produce 2/3 of the ultimate impact.

The oceans have less freedom, so this chart is limited to roughly the lowest energy level that liquid saltwater might obtain, below 302Wm-2 they would be frozen.  With the same 4.1Wm-2 of forcing applied to the ocean "surface" in the tropics, there is much lower "sensitivity", 0.58 instead of 1.536.  Since Earth does have seasons, ice will form at the poles in winter and melt in summer.  As long as ice exists, the oceans will have a different sensitivity than the atmosphere.

Now I have no idea how well Selvam's work and the Golden Ratio apply to climate, but this overly simple application does tend to fit what I would physically expect, there is more noise in the atmosphere and less noise in the oceans.  The oceans, with a 1000 times the heat capacity of the atmosphere will impose limits on the response of a doubling of CO2.

Now you readers need to remember that CO2 forcing is a sideshow to me, beyond a "sensitivity" range of .5 to 1.5 C per doubling there is nothing but unknowns.  Because of the self-organized criticality, predictions of future climate is limited to a range of probability, but including that range as possibly due to CO2 is pseudo-science.  Instead of 1.5 to 4.5, a realistic range of future climate is more like +/- 3 with 0.5 to 1.5 CO2 bias or -2.5 to 4.5 C degrees(actually, -1.5 to 3.5 is more realistic since sensitivity decreases with temperature, but -2.5 to 4.5 allows for more uncertainty.).  Without knowing were we are in the normal "noise" we cannot predict what our CO2 amplification/buffering will produce.

So expect to see more articles like this, Matt Ridley: Cooling Down the Fears of Climate Change since more folks are realizing there is a flaw in the Greenhouse Effect logic.  It is still a Tale of Two Greenhouses.
Posted by Unknown at 7:18 AM