The Antarctic is Warming Faster than any Place on Earth?

Oh the humanity!  I noticed that yet again, Dr. Eric Steig of the University of Washington, has mentioned that The Heat is on in the West Antarctic.  Dr. Steig, the genius behind the previous Nature article on Antarctic warming that got a warm reception until the methodology was challenged by a bunch of unscientific statisticians led by O'Donnell and master of out of context debate, still seems to believe that his version of the scientific method is sound.  If you happen to have some spare time and need a laugh, visit Real Climate and Google Antarctic. 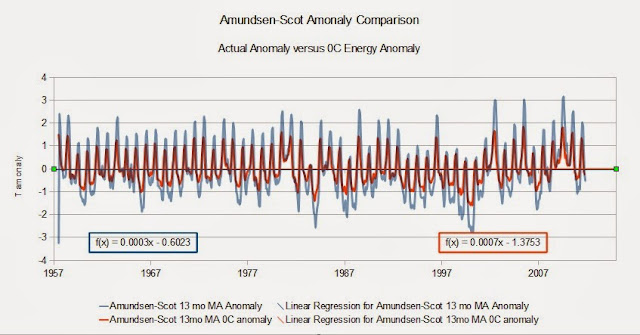 Above is the temperature data for the Amundsen Scott Antarctic station temperature anomaly.  In blue is the actual anomaly and in orange is the anomaly adjusted to zero C degrees.  Since the average annual temperature average is less that -30C degrees, it doesn't take much energy to produce large swings in temperature.  If is pick just the right smoothing and the perfect start time, I could pull a Steig and have a warming Antarctic.  If I cherry pick a paleo reconstruction that happens to "jive" with my agenda, I could show that the Antarctic is warming or cooling or staying the same.

What I have mentioned in the past, is that the Antarctic "trends" tend to be out of phase with "global" trends.  Starting in roughly 1987 to 2000, when the "globe" experienced the most recent warming, the Amundsen Scott temperatures appear to have trended cooler.  Starting in roughly 2000, when the "global" temperature trends appears to have paused, the Antarctic appears to have warmed.

It would take some pretty creative math to "Steig" a trend consistent with atmospheric CO2 concentration increase.  Where there is a will though, there is a way.  So for this month at least, climate "science" is pretty sure that the Antarctic, at least in the west, is warming faster than any place on Earth.  :)
Posted by Unknown at 7:31 AM