Quondum posted an interesting comment on Dr. Curry's Blog.  It is interesting to me because it is very similar to the moisture model I have been playing with. 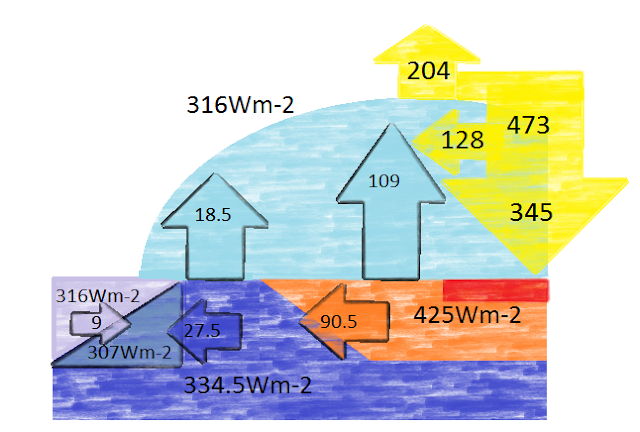 The moisture model considers the freezing point of water as a reference thermodynamic boundary layer.  Energy is applied at the equator and migrates toward the colder poles.  For simplification, I use the Effective Energy based on the Stefan-Boltzmann relationship instead of temperature.  The diagram above shows some of the transitions, or other thermodynamic boundary layers that may need to be considered.  Averaging can be either a simplification or a "gotcha" in a complex model.  At the transition from 425Wm-2 to 334.5 Wm-2 in the oceans, the energy flux to the atmosphere and the single 316 Wm-2 moisture boundary changes and at the 316/307 Wm-2 block, there is not only another shift, but an inversion in the ratio.  The 316Wm-2 is "fixed" by the properties of fresh water, but the 307Wm-2 can change with the salinity of the actual ocean water.  Note that the only fixed value is the 316Wm-2.  For a radiant model, the only "fixed" value is ~240Wm-2, the approximate value of the total solar energy absorbed by the "surface".

Since the oceans absorb most of their energy near the equator, the absorbed energy is roughly twice the "true" surface absorbed energy used in radiant models.  Shown above as ~345 Wm-2 and the majority of the internal energy of the oceans migrates to the poles.  For the oceans, a different set of "averages" apply than would apply to the atmosphere.  There is effectively two greenhouse effects, an atmospheric "greenhouse" and an ocean "greenhouse" with two different "average" source and sink values, gotcha!

Quondum would run into this same situation with his/her Helmholtz free energy model.  Since the oceans constantly shift from fresh to saline dominate modes, there will be roughly 9Wm-2 of "slop" in the reference isothermal layer common to both the atmospheric and ocean systems.  This is not an insurmountable obstacle, but would require very close attention to the "bookkeeping" when determining the dissipation energy.

To add to the complexity, the poles are not uniform sinks for either the oceans or the atmosphere.  The Southern pole is a much better ocean sink and the Northern pole a much better atmospheric sink. Since the southern pole is a better sink for the majority of the heat capacity of the total system (the oceans), it would more likely limit the "sensitivity" of both atmospheric and oceans to any uniform common forcing.
Posted by Unknown at 6:02 AM