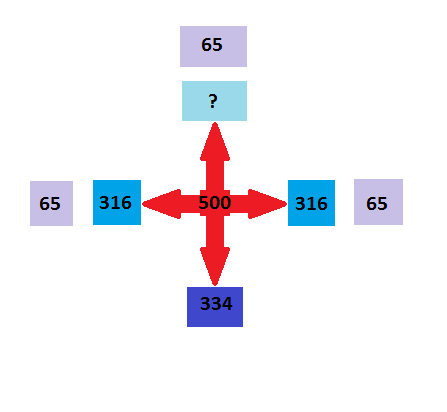 Cross Roads, Time and Sky Dragons, was a hastily throw together post on the confusion that Sky Dragons have and generate.  The Atmospheric effect is complicated, but energy balance is simple.  Rednecks are simple so we like simplicity.  If there are not equal and opposite forces, stuff breaks, since Rednecks are good at breaking stuff, we have that principle of physics down pat.

Again the numbers in the block represent forces, like in intro to statics, they have to balance.  The forces are actually energy flux values.  I have added the 65 because that happens to be a very convenient value that encompasses the whole Earth.  Unlike 316, the energy of a surface of water at the fresh water freezing point, that value only extends to the point where water freezes.  316 is needed though since the 334, the approximate effective energy of the deep oceans is the most stable "base" for our static model.  When the Sky Dragons saw the infamous K&T budget cartoon, the immediately assumed that climate scientist were violating the second law of thermodynamics.  Actually, climate scientists were just idiots for publishing a vague piece of crap with overly confident error bars.

After much soul searching and data torture, climate scientists settled on a value of ~333 Wm-2 +/- 20 for the "actual" DWLR number.  Since climate scientists selected the poorly defined tropopause as their reference value after making a number of assumptions about what things might be without a greenhouse effect, they have a great deal of uncertainty to deal with in order to confidently publish tripe with error bars of 0.15 Wm-2 derived from models that are not exactly kicking butt at the moment.

The astute among you may have noticed that 334 is pretty close to the 333 +/- 20 value of the much pondered value of DWLR.  Hmmm?  Could it be that the ocean depths are a friggin' clue?  Naw!  That is much too simple an observation for all the money spent and man hours required to arrive at ~333Wm-2 +/- 20 which confuses the hell out of most folks, especially Sky Dragons, who are severely confused to begin with.

The 65 I use is not exactly 65.  Venus has close to the same mass as Earth but not quite.  Since mass is related to gravity and gravity impacts the density of gases and density impacts the heat capacity and heat transfer of gases and the gas with the highest radiantly active thermodynamic properties in the upper atmosphere common to  both Earth and Venus is CO2, there is a slight difference between Earth and Venus.  Rednecks though are comfortable with a touch of uncertainty during the initial stages of model development.  So my simple model uses 65 though it is closer to 68 on Earth for CO2 and Ozone, CH4 and traces of other gases in places they typically shouldn't be, does have some impact.

In the Cross Road, Time and Sky Dragons post there was this nifty drawing of Thermodynamic Reference Layers.  The purpose of this drawing and the Cross Roads Drawing above is to attempt to get Sky Dragons to think in multi-dimensions.  Changing the relationship of any of the layers with respect to any other layer causes changes with may require time to stabilize.

This animation borrowed from Wikipedia illustrates that the reference layers are constantly changing.  So my simple static model would be limited, but useful IMHO.  Notice how the distance from the Equator to the edge of the sea ice, the 316 blocks in the simple static model, change. How would that impact the red arrow values in the thermodynamic reference layers drawing?
Posted by Unknown at 8:42 AM