This is another of those thinking aloud posts.  I had been looking at Relativistic Heat Conduction.  To use RHC properly is a PITA because you would really have to do line by line adjustments for each part of the energy spectrum and adjust for the spectrum of each volume based on composition and density plus phase changes would be a real PITA.  Still it just seems there should be a reasonable short cut that would get it in the ballpark. 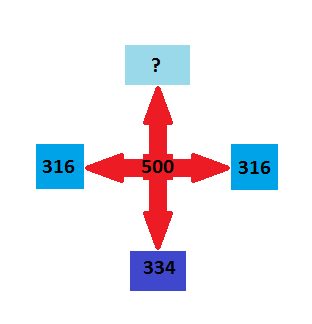 The sketch above is the energy cross roads.  If we lived on an ideal world, the cross roads would be located perfectly on the equator.  With RHC you forget entirely about temperature and think purely in terms of energy.  The 316 blocks are the nasty phase change of water to ice.  The 334 is the deep oceans approximately at 4C degree and the ? is the ?

In the perfect RHC world, the 334 would be 316, but since ice has a lower density than water it floats, we are stuck with 334 or there abouts.  The difference between my ideal 500 and 334 is 166 W per some unit area instead of 184 W in all directions.  Coming out of the 500 would be a point at you and another away from you.  In other words, the 500 emits isotropically.  Since the blocks limit the energy flux, there would have to be 166 up from the deep oceans and an extra 18 up thanks to the nasty heat of fusion.  For there to be no loss of energy, the ? box would be 334 minus the nasty 18 or 316 with some resistance to balance the 184W per some unit area.  That some resistance per some unit area would be the Effective Radiant Layer (ERL) of 184 Wm-2 since the 316 also has to be in balance with some resistance per some unit area.  Confused?

Sorry, but that is the nature of the beast.  There has to be a balancing force of some kind or nothing exists.  Even a small imbalance over enough time changes everything.  Why 184?  Doesn't have to be, the 500 is an estimate.  With 1360 Wm-2 available from the sun and roughly a 0.3 albedo, 952Wm-2 would be available at the "surface".  Using half assuming that solar can be averaged, 476 may be a better number than 500.  That would make 160 the magic number, only the warmest parts of the tropical oceans prefer something closer to the 500.  As for temperature, that would be a range of 29.5 to 33.3 C degrees, which agrees well with the actual tropical SST measurements, or nearly 4 degrees for 24Wm-2 change in tropical surface energy.

With the 316 close to fixed by the freezing point of water (it can be a few degrees lower depending on salinity), the 334 is another minor question mark.  If it were 2 degrees colder the effective energy would be about 325Wm-2 or about 9Wm-2 for a 2 C difference.  So for the deep ocean, 1 degree per 4.5Wm-2 change and the tropical surface temperature 1 degree for 6Wm-2 change in energy are reasonable estimates for small changes.

The ratio of the different "sensitivities" 4.5/6=0.75 is one of the points of this rambling.  The "layers" have different "sensitivities.  0.75 if the surface warms and the inverse, 1.5 if the deep oceans warm.  This is also where attempting to simplify RHC gets tricky.  Since solar penetrates to depth, not necessarily the 334 Wm-2 average depth, but to some depth and IR whether from solar or atmospheric resistance does not, the tropical oceans have a lower "sensitivity" to greenhouse gas "forcing".  The quotes are because changes in the rate of internal transfer of energy would have atmospheric impacts difficult to distinguish from atmospheric "forcing". To get a verifiable RHC "solution", line by line estimates of the impacts of each portion of the radiant spectrum would be required.  RHC includes a velocity relationship similar to the speed of light in relativistic physics called the speed of second sound.  The speed of sound increases with density and temperature in water which makes a simple "solution" virtually impossible.

At this point, I considered non-equilibrium thermodynamics which is a little too creative for purists to follow. Since a uniform density is generally required for RHC solution and the thermodynamics of water and moist air are well understood, I considered modeling the 316 moist lower atmosphere and oceans as "radiantless" thermal "envelopes".  In the Thermodynamic Reference Layers - a Visual Aid post which is really just a simplified illustration of my Moisture Model, I tried to better define the internal Wall energy transfer issue.  Now that more attention is being paid to the huge amounts of energy lost during Sudden Stratospheric Warming events, I may have learned enough climate geek jargon to have some actually grasp a part of what I think is a elegantly simple approach to a damn complex problem.

If anyone is following this post, absolute surface temperatures converted to effective S-B energy is required to move to the next stage of modeling medium scale, 5 degree latitude, wall transfer of energy.