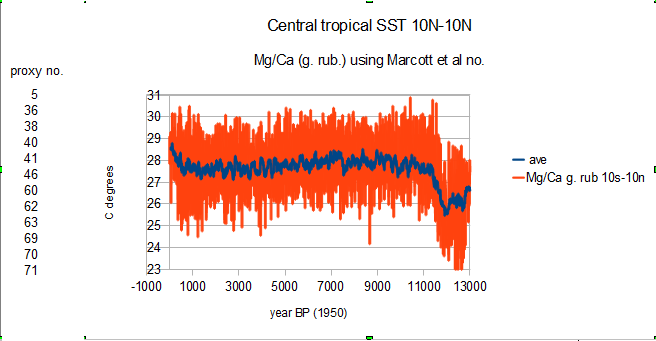 My favorite is becoming the Mg/Ca (g. ruber.) pretty quickly.  Instead of the standard spaghetti chart this is something a bit different.  This is just all the Marcott et al. selected reconstructions for the central tropical region combined in one big time series.   This gives you an eye for the variance in the individual proxy reconstructions versus a roughly 100 initial to 500 year smooth back near 13000 BP.   Since this doesn't include "caps" or the most recent data for the core locations, there is a "hockey stick" starting around 800 years before present.  The "caps" are all pretty much in the orange noise so the variance here is not a bad indication of the overall confidence interval.  If these were all thermometers, you could reduce the error range but paleo "bugs" can have biases so there is some question about how much you can reduce the error bars.

I like the Mg/Ca because they appear to produce more realistic temperatures more often.

The Uk'37 and TEX 86 are alkenone based "thermometers" seem to have issues figuring out if they are "surface" or "subsurface" temperature indicators.  While there where not many southern tropical reconstructions selected by Marcott et al. the ones selected have a much higher variation.  Near the Pacific coast that variation could be real with changing currents or it could be "bugs" going with the flow from colder waters with the currents.   That is useful, but I would think a serious ocean current model would be required to take advantage of these.  TEX 86 though seems to be mainly a fresh water thing.  The Teirney et al Lake Tanganyika reconstruction which is included in this group, so it not a "true" SST reconstruction, is responsible for the more noticeable peaks.

It has a number of spikes that are likely related to the precessional cycle. 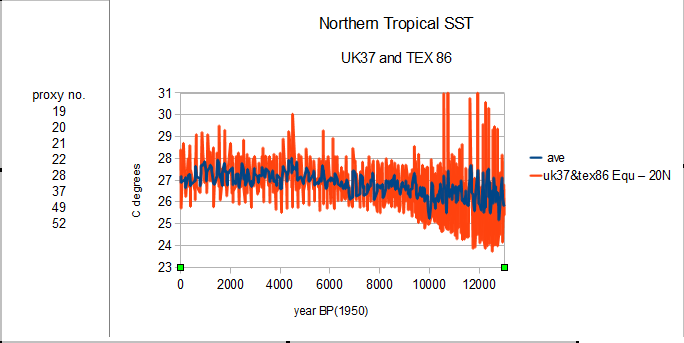 There are more northern tropical reconstructions in the Marcott et al. selections and these tend to be in better agreement.  Not a huge difference between Glacial and Inter-Glacial in the northern tropics it would seem. 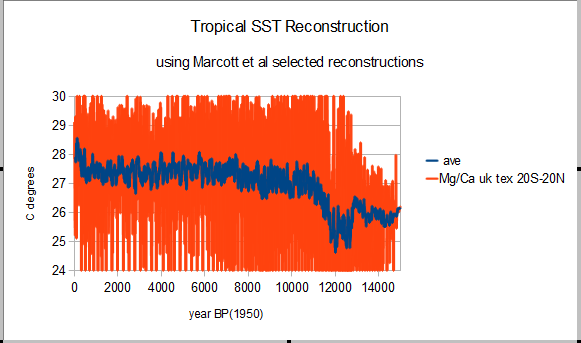 If I combine all the reconstructions, since the central equator has more recons it tends to dominate.  You get the same hockey stick shifted toward 300 years BP.  Since the UK37 recons tend to run a little on the cold side the variance is much larger.


As I said at the start this isn't your standard reconstruction but I think it does show potential uncertainty better than you will normally see.  btw, the last combines all the reconstructions listed on the first three charts.

Update: Here is a semi-random mix of tropical recons. 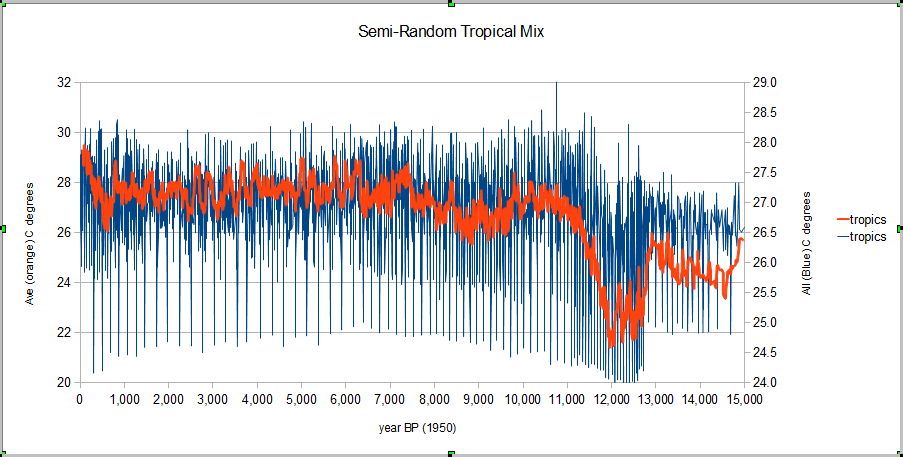 This is mainly eastern tropical Pacific which I used with no particular plan in mind (semi-random).  Other than the "cap" recons there aren't that many that were missed by Marcott et al. 2013, other than some of the longer, low frequency recons.  Some of those have clusters of higher frequency data points around interesting events like the LGM and the Younger Dryas.  Including those will play hell with estimating confidence intervals.  This chart though has the average scale on the right (note I have the ledges reversed) and the average on the right.  I was going to trash this but figured I might as well post it so it is saved from my next round of playing.
Posted by Unknown at 6:19 PM