With all the rejoicing over 2014 possibly being the warmest year EVAH in a couple of the surface temperature products, I thought I would revisit Anti-Arctica.  The Arctic and Antarctic are out of phase seasonally and often for decades or more.  Both are poorly covered by instrumentation and BEST, the Berkeley Earth Surface Temperature Project deals with that by kriging i.e. fancy interpolation, of the temperatures they have.  Because of issues, BEST doesn't even provide monthly values for the Anti-Arctic, but instead annual values interpolated to monthly values.  They also provide approximate monthly average absolute temperatures.  After all this massaging they come up with an average error range for the Anti-Arctic of roughly +/- 0.8 C degrees.  That actually is a pretty incredible feat.  Since BEST provides Absolute Temperature Estimates (ATE) for some areas, you can compare rough energy values with other stuff. 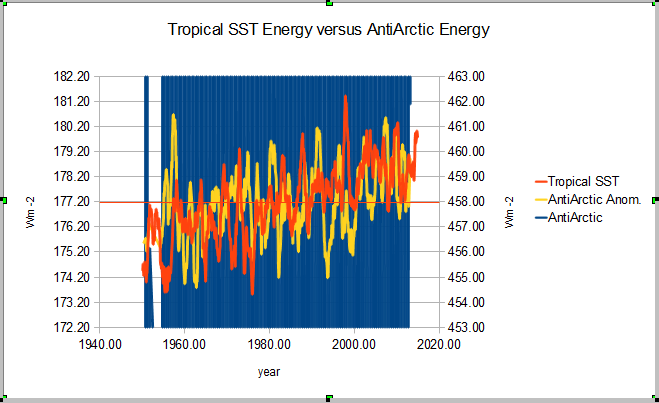 This chart compares the Anti-Arctic surface energy with the tropical ocean energy, based on the Stefan-Boltzmann law.  I have the scales adjusted to the same ten Wm-2 range offset by the difference in average energy.  As you can see, for the short period there is Anti-Arctic data, the two have the same slope but differ in variation.  So when I use Tropical SST as a proxy for Global surface temperature, you can see I at least have the least sample area on Earth, Anti-Arctic fairly well covered right?

There is only about 60 years of Anti-Arctic data and no guarantee that this energy relationship remains exactly the same for ever and ever, but it looks like there is a fairly good chance it will be in the ballpark.

This relationship will likely hold only for the entire Anti-Arctic.  The closer you get to the poles the greater anti-phase  response is likely, so focusing just on the interior would tend to drive you nuts.  Let's just say it stays PDC (Pretty Damned Cold).

The reason I focus on Energy which has to be calculated using actual temperatures is because this is an energy problem.  The dry greenhouse gases respond mainly to the Stefan-Boltzmann law energy change and not so much to latent and conductive changes.  The wet greenhouse gases, water vapor, respond to surface temperature in a more classical physics respect which requires attention to enthalpy details.  So using basic radiant transfer you can get extremely close estimates at the Top of the Atmosphere (TOA) but be several degrees and 10s of Wm-2 off if you venture into the classic thermodynamic wet region near the surface.

This post is inspired by some fun I had with the RealClimate gang a few years ago while they were trying to explain how the Antarctic was warming and how in any day now there would be huge unmistakable "proof" of AGW in the Antarctic.  Well, what "proof" there is has been there all along.  The Antarctic as a whole will warm directly proportionally to the tropics and the interior will cool about as much as the fringes warm.  In the coldest regions of the Anti-Arctic, more CO2 slightly increases its ability to radiantly cool to space.  The Anti-Arctic is Earth's go to heat sink after all.

Unfortunately, BEST doesn't make it easy to mask regions in absolute temperature values so I can play with more energy relationships.  Their fixation on a very limited utility Surface Temperature Anomaly to a Global gnat's ass of precision shows they are just following the crowd instead of wanting to lead the pack.  BEST, the view isn't going to change.
Posted by Unknown at 6:52 AM