Hubert Lamb, a, if not the first climatologist, who organized the UK Climate Research Unit and has one of their buildings named after him published a book on climate that included a graph of the past 1000 years.  There is no calibrated temperature scale on the graph, just a rough estimate of temperature variation.  There has been a great deal of effort in Paleo-climate circles to "discredit" for want of a better word Dr. Lambs rough estimate of past temperatures. 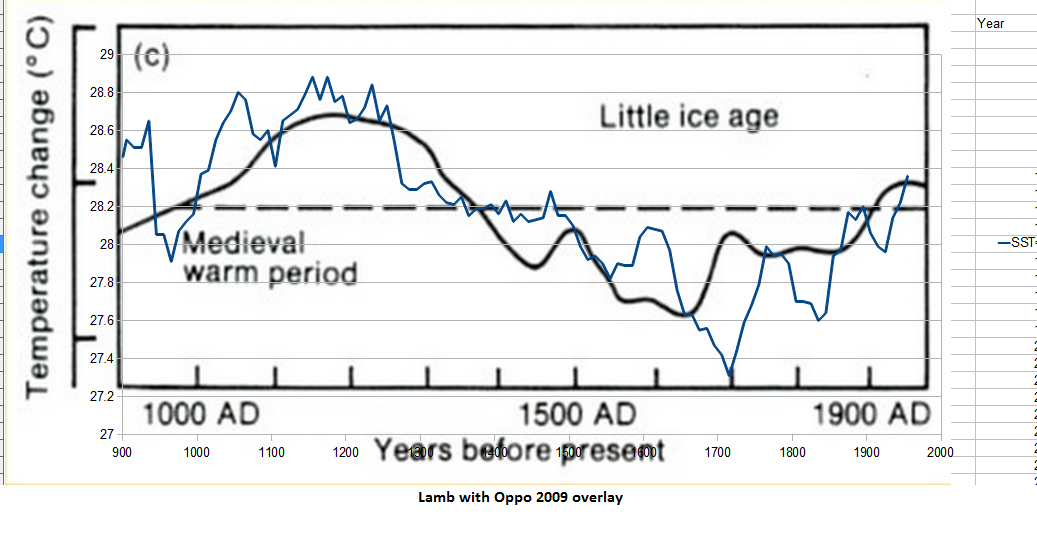 So just for grins I lifted a copy of Lamb's graph from the Skeptical Science stormtroopers site and overlaid the Oppo 2009 Indo-Pacific Warm Pool reconstruction.  Considering that Lamb didn't have much data to work with, it looks pretty close to me.  That should pretty much prove that the "Lamb was Wrong" comment was pretty petty.  I doubt anyone will be right.  How wrong are they would be in order. 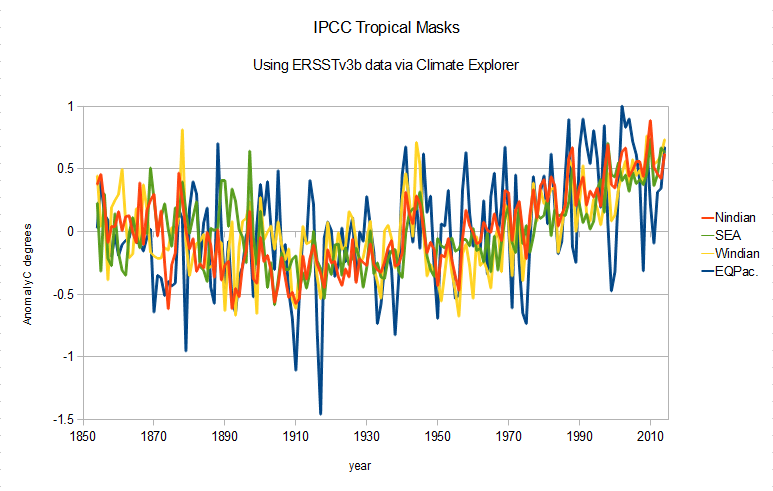 I have mentioned before that the oceans wag the tail and that the tropics correlate extremely well with "Global Mean Temperature Anomaly"  Well, the IPCC has a few region masks you can use on Climate Explorer.  The NIndian mask has a 90% correlation with GISS global, SEA and WIndian are at 74% correlation and the EQPac. has a 55% correlation.  I didn't check the coordinates, but the EQpac. appears be be just West of the Nino 3.4 region.  The Northern Indian ocean since it has very little out flow has the best correlation with global as should be expected.  So the Oppo 2009 IPWP recon should have a fairly good correlation with Global temperatures.

Since Lamb's rough reconstruction agrees well with Oppo 2009 and that region has a very high correlation with "Global", Lamb should be getting more credit in my opinion.  There are a whole flock of wanna be reconstructions that have so many really stupid errors, that climate scientists should be a little more cautious of throwing bricks at some of their elders.

I don't have a dog in this hunt but it looks to me like Mann and Marcott are not qualified to hold Lamb's jock strap.

The Oppo 2009 IPWP core samples are approximately 50 year naturally smoothed.  The sediment does not form nice annual or decadal layers, so you can only get about 50 year resolution.  Oppo et al "binned" their data into decadal data points.  That makes life simpler should you wise to combine a number of reconstructions including instrumental data. 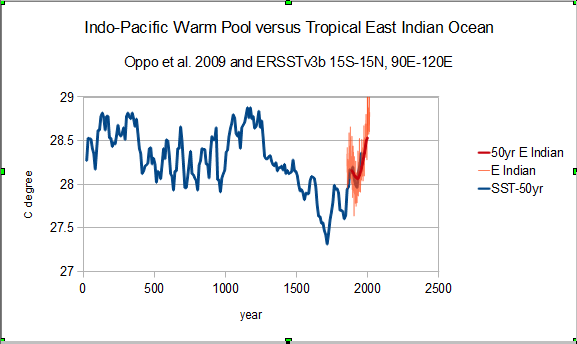 Here I spliced the sea surface temperature data as noted on the chart with the Oppo 2009 with the SST-50yr notation included in their archived data.  Matching 50 year smooth SST with Oppo, not much of a hockey stick.  The lighter red monthly instrumental data produces a nice hockey stick. I could use daily data and get a really nice hockey stick.  However, apples to apples would be 50 year smooth to 50 year smooth.  There are quite a few hockey stick created by mis-matched smoothing.  That isn't really "fraudulent" provided you don't conceal the smoothing differences in order to mislead.  I don't know of any intentional examples, but it is difficult to determine what is the real smoothing of many of the proxies used in paleoclimate.  Since most of the paleo temperature proxies are living creatures, they would also have some bias toward survival which is difficult to determine.  Paleo climate reconstruction is not an "exact" science and will undergo some growing pains as attempts to improve or more accurately determine uncertainty progresses.  During that time I expect I and others may be accused of "Grossly" misrepresenting something since many "Expect" hockey sticks.  Such is life.
Posted by Unknown at 2:46 PM