I created a brief post on my opinion of how solar orbital forcing on the oceans specifically for paleo reconstructions, Solar Precessional and Ocean Heat Uptake.  I really wanted it to be "brief" because I didn't want to go through all the crap needed to "prove" a correlation that I knew existed but wasn't sexy enough to blow people's minds.  But since there are people that want to dig deeper I created a quick and dirty example. 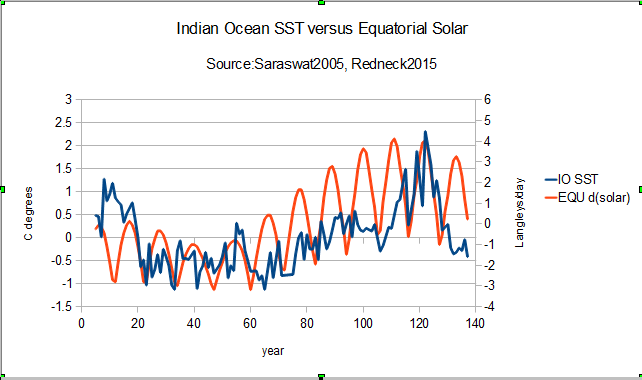 This is a comparison of an Indian Ocean temperature reconstruction by Saraswat et al. 2005 that is available from the NOAA NCDC paleo website for anyone wanting to replicate and Equatorial solar orbital forcing variation created by Berger A. and Loutre M.F., 1991, also available at NOAA NCDC website.  If you want to duplicate this "exactly" you will need to figure out the percent of the total ocean area by 10 degree latitude band in order to ratio the solar variation.

The correlation between the reconstruction and solar at the equator is ~50%, with total solar (85S-85N) 43% and ex-arctic (60N-60S) 42%.  That would be what I would call a "fair" correlation given all the issues with coarse paleo reconstructions.  This will not blow wind up most folks skirts, but it isn't all that bad really.

The solar is based on "peak" values not average as explained in the post I linked to some extent.  There is way too much going on in the climate system and paleo to expect a perfect correlation but about half would be better than many would anticipate.  The correlation is based on 130 points if that is something you would like to know for some "significance" verification.  Be aware though that I had to "bin" the IO recon to 1ka points to match the solar data which would influence the correlation somewhat. 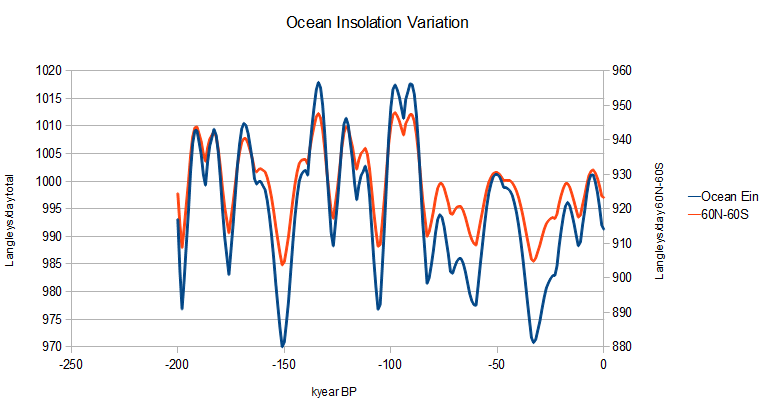 This is what the "global" and "wet" ocean solar insolation curves look like. "Wet" would be 60S-60N which is generally ice free.

Be also aware that the spread sheet size can get a bit cumbersome so it would be better to do some real programming if that is your thing. The moral though is that "The Sun Done about half of it if not more."

Update:  Here is another one. 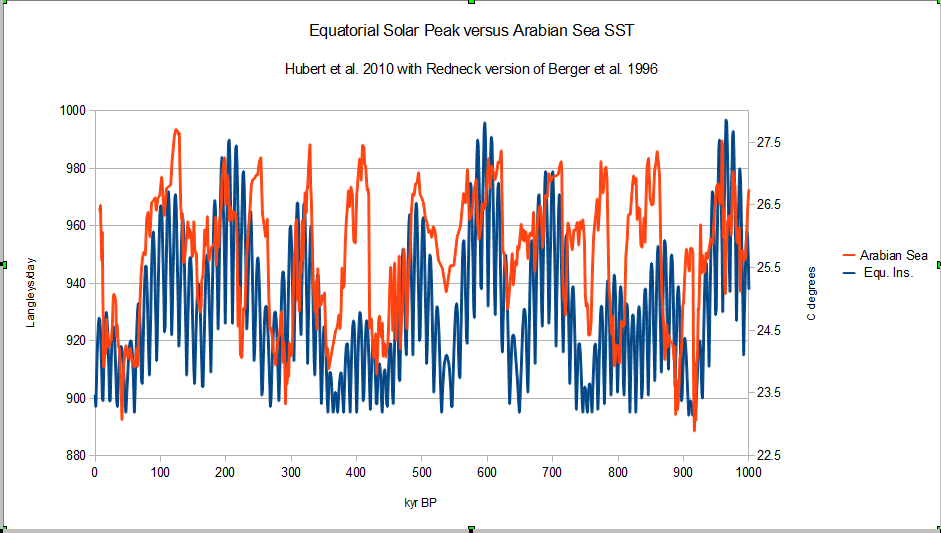 That is the Arabian Sea reconstruction by Herbert, T.D., L.C. Peterson, K.T. Lawrence, and Z. Liu. 2010 with the full equatorial peak insolation using Berger et al.  I think it is a good correlation but I didn't bin a million years worth of data to find out how good.