Tropical Oceans control Global Surface Temperature, just like they should 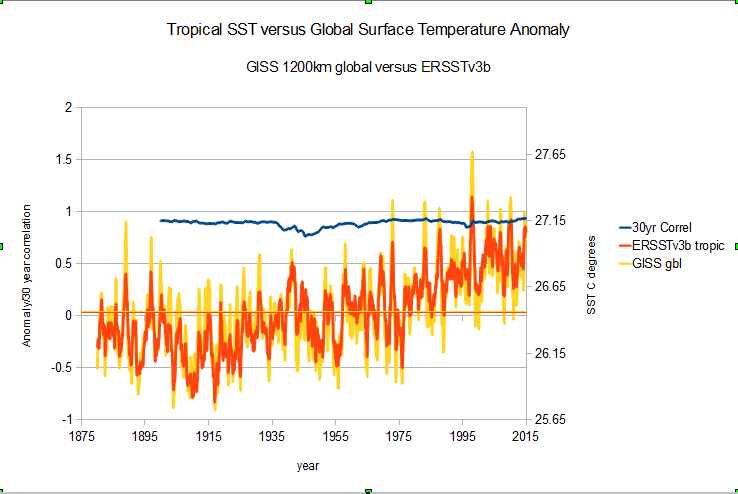 Since GISS GMST uses ERSST for ~70% of its data and the tropical ocean are roughly 44% of the oceans, having a correlation greater than 70% is a pretty good indication that the tropical oceans have a large influence on GMST.

I am also providing this post because of a few recent disputes over what function clouds play in the whole climate picture.  Because clouds in the mid to higher latitudes have a positive feedback, meaning they help retain heat energy, their role as a regulating variable tends to be lost in the debate.  Warming tropical oceans produce more surface evaporation and that evaporation tends to produce clouds.  The clouds tend to reflect short wave solar energy and absorb some of the solar energy which reduces surface temperature.  It is a regulating relationship that helps maintain tropical oceans generally below a 30 C peak temperature.  Not all tropical bodies of water are maintained this way.  The Dead Sea for example can be several degrees higher, being surround by a desert, the lower regional humidity and land warming would tend to impact where and how much clouds produced by Dead Sea evaporation form.  The Arabian Sea and Red Sea also tend to have a higher temperature since clouds cannot provide as much surface temperature regulation. Ocean currents produce by prevailing surface winds are also less consistent near land masses.  Wind speed is another factor that has to ve considered in surface evaporation.

Most of the tropical ocean precipitation returns to the same body of water that produced the evaporation and that precipitation would be close to the dew point temperature of the air above the surface.  For a 90 F SST at 85% RH, the dew point temperature would be about 85 F degrees.  If the SST raised to 95 F there would be the same 5 degree wet bulb depression at 85% RH meaning that clouds could form at a higher air temperature.  That would be a lower altitude given the saturated lapse rate.  At the 85 F dew point temperature the saturated condensate would release about 99 J/gram of dry air and at 90 F dew point the saturated condensate would release about 105 J/gram and is on a fair steep slope according to your standard psychrometric chart.  Since RH can easily increase with temperature and convection drive surface winds, that non-linearity makes for somewhat stable control i.e. temperature regulation at the surface.

Obviously, from the chart above, the tropical oceans have been warming and there should be a tropical tropospheric hot spot (TTHS) if the warming is due to greenhouse gas forcing.  For some reason, many believe that there should be a TTHS regardless of the GHE.  That appears to be due to an assumption that cloud fraction remains constant.  That is a pretty large assumption to make.  Not only does cloud fraction vary but cloud composition varies and they can contain more/less super saturated water.  These mixed phase clouds, water vapor, ice and super saturated water, have been called the forgotten clouds.   A young PhD candidate, Andrew Barrett, from the UK proposed in his thesis that proper parameterization of the mid-level liquid-layer topped stratiform clouds would reduce climate sensitivity in climate models to approximately 1.6 C per doubling.  That would be a step in the right direction, however with better modeling there will still be a long term persistent warming trend related to the Little Ice Age impact on tropical ocean surface temperature to deal with.  That should reduce actual "sensitivity" to closer to 1 C per doubling and indicate that "sensitivity" is non-linear due to the regulating response of tropical ocean clouds.

This is the kind of thing that happens when someone becomes married to their theory.  What should be obvious issues get wished away only to come back and bite you in the ass.  Climate is wondrously complex and trying to over simplify just takes away from what should be a marvelous puzzle.  Climate science will eventually return to "normal", but likely only after a changing of the guard.  Science does seem to advance one retirement or death at a time.